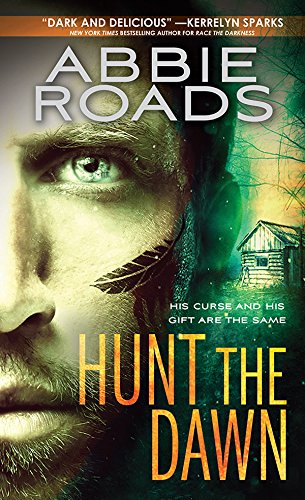 Sometimes I can only take so much crazysauce and wtfery before I have to tap out. I know, I know, you good folks rely on me to read this shit so you don’t have to, but even I have my limits. I DNF’d Hunt the Dawn, but I did get far enough to share some prime F+ moments with you.

Hunt the Dawn is a romantic suspense novel featuring Lathaniel (yes, yes, that is his actual name) Montgomery, a man who can smell peoples’ memories.

I’m going to pause and let you soak that in. Lathan can smell peoples’ memories.

You see, Lathan had some kind of tragic event happen in his life (I didn’t get far enough to learn what it was) that left him partially deaf but also with an extremely heightened sense of smell. And by extremely heightened I don’t mean identifying all the ingredients in a boiling soup. I mean he can smell emotions, and yes, memories. In fact, when he smells a memory, he relives it–a scent memory or “SM.” As a result, it’s hard for him to be around people.

Oh, and when he’s in the midst of a SM, his eye rolls around in his head uncontrollably.

The left one. In case you were wondering.

Anyway. Lathan does what anyone with the ability to smell memories amid uncontrollable eye movements would do. He helps the FBI solve murders. He is specifically on the hunt for a serial killer named The Strategist.

Am I the only one who thinks we need to stop giving serial killers cool names? What about giving them dumb names, thereby removing any sense of power or importance from these guys? Instead of “The Strategist” why not “The Guy Who Shits His Pants On The Regular.” Yeah, it takes awhile to get out, but I think it sets the right tone.

Anyway, Lathan goes to some profiling seminar but he can’t make it through the event because the ASL translator is sending him some seriously pornographic SMs:

“I should go.” Her voice lacked as much conviction as her will.

“Baby, come back to bed, just for a little while.” Cara threw back the covers. She’d strapped Big Johnnie around her waist. He pointed proudly perpendicular.

She glanced at the bedside clock. She was going to be late. It’d be worth it.

The SM continued to play in front of his left eye. His right eye focused on Dr. Jonah. Lathan pressed his left eye closed with his fingers to block out the images, but they projected on the back of his eyelid. Hard to lose focus on reality. Disorienting as hell. Don’t lose control.

I need to break this down just for my own sanity and understanding: Lathan apparently smelled the interpreter’s memory of having hot sex that morning and then saw it projected on his eyelid.

But just the left one.

Right. (Or left?) So he flees the seminar because of the strap-on memories invading his brain–sorry, left eyeball–and then we cut to:

Evanee Brown, waitress at a knock-off Hooters. Evanee has just gotten done with work, which sucked, and thinks to herself:

The hardest part of the day wasn’t the eight hours in heels. It was this moment, when she had time to remember her belly flop off the cliff of comfort into the cesspool of white trash. From a safe, easy life to this truck-stop waitress existence. From trendy apartment to living behind Sweet Buns at Morty’s Motor Lodge. From privacy to sharing a room with Brittany, the town whore. From profound ignorance to the realization that everything good she used to have came from being a whore, too. So Evanee’s roommate is with a client and Evanee decides to go sleep in her car for awhile. Except she’s accosted by a man named Junior who is also her former rapist. They get into a struggle and Lathan happens to come by on his motorcycle and kicks the shit out of Junior and saves Evanee.

He also notice that he gets no SMs from her:

He didn’t believe in God, but maybe, just maybe she was created for him. An Eve to  his Adam.

Incidentally he thinks this like ten seconds after saving her from her rapist who HE KNOWS is her rapist because gets a scent memory from Junior.

So he takes Evanee back to his cabin where she falls asleep, exhausted, on his couch. When she dreams she goes to a place she calls The White Place, “an endless plateau of white.”  Apparently she’s had these dreams before. But then she sees a little girl:

She could only see the side of the girl’s face, but that was enough to see her beauty. She was the kind of child women were jealous of because they knew how stunning she’d be when she matured.

WHO THE FUCK ARE THESE WOMEN?

I have a lot of thoughts when I look at kids, namely “why so sticky?”, “thank god I don’t have one” and “is she going to bite me?” but I’ve NEVER been pissed at kid because I thought she might grow up to be pretty.

You know, Evanee has some serious internalized misogyny going on. She needs to do some reading and maybe talk therapy.

But don’t worry, when the little girl turns her head, her face is ravaged and she’s missing an eye and Evanee freaks out and wakes up.

Lathan comes to see what’s the matter only to FIND EVANEE HOLDING A FUCKING EYEBALL IN HER HAND.

Like, she went to sleep, dreamed about a kid missing an eye, and WOKE UP HOLDING THAT EYE.

Everyone freaks the fuck out. Lathan thinks:

He had questions and not one answer. What was her name? Why didn’t he get SMs from her? Why was he able to touch her? Where the fuck did she get a human eyeball?

YOU REALLY BURIED THE LEDE THERE LATHAN.

Like “Where the fuck did you get a human eyeball” should ALWAYS be the first question. And you know what, I bet the fucking answer is Amazon.

So then Evanee starts vomiting blood–but not her own apparently. She’s like able to conjure other people’s awful body parts or something. Man, she’d be the shittiest birthday clown ever.

Lathan is able to comfort her:

Heat spread up her arms to her shoulders, across her chest to her heart, then pumped outward to her extremities.  His hands were twin IVs of feel-good plugged directly into her veins.

Note: If anyone offers you an IV of “feel-good,” they are not an actual medical doctor, okay?

Lathan’s FBI buddy shows up and is understandably concerned by the woman vomiting blood and holding a human eye. He’s there to ask Lathan for his help solving a case where a little girl is murdered and DUN DUN DUN she’s missing an eye.

(On a side note, I really, really want this to be a movie starring Tom Cruise. He’s so lacking in self awareness that I think he could really lend gravitas to the “smelling the strap-on memory” scene.)

Honestly, I felt bad for FBI guy. He’s just trying to do his job and he walks into the blood-vomit, scent memory WTF emporium.

And that’s where I stopped. Once Evanee started randomly generating other people’s body parts, I noped the fuck out. I rubbed my face for a little bit, and then I went and ate some Christmas chocolate and didn’t talk to anyone for awhile.

If you have the stamina to finish this book, by all means, let me know if it gets better. I can only handle so much.

Hunt the Dawn by Abbie Roads