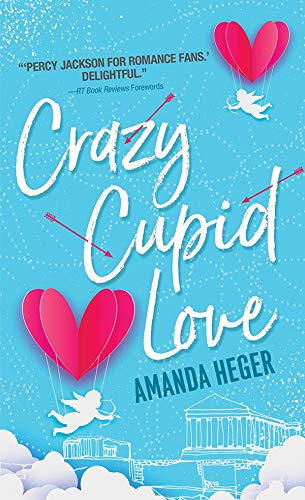 Crazy Cupid Love is an interesting fantasy/paranormal romance that will definitely appeal to mythology nerds. There’s a friends to lovers romance, an adorable beta hero (who gifts the heroine with Dunkaroos), and a whodunnit. While neither the romance nor the mystery were incredibly strong, the world and the surrounding mythologies could lead to some wonderful future books.

Eliza Herman is a descendant of Cupid and exists in a modern world, specifically California, where people turn to Cupids to help with their love life. Her family runs a very successful Cupid firm with her twin brother Elijah, but Eliza has no interest in the family business. In fact, she has a hard time believing in love, the kind with a “capital L.” To make matters worse, Eliza is incredibly powerful and, instead of needing to draw blood to do an enchantment as is customary, all she has to do is injure them.

The fact that Eliza is incredibly clumsy means that she winds up enchanting strangers. She could step on their toes, trip into them, etc. Thankfully, enchantments only enhance attraction that is already there and only last a lunar cycle. I was worried that Cupids could enchant people against their will, but I’m happy that it was specified that it just makes existing feelings stronger.

When a family emergency puts Eliza’s dad out of commission right before her brother is due to leave for a Cupid conference, Eliza agrees to step in temporarily, officially get her Cupid license, and fill in for her dad. In order to get her license, she needs a mentor to log her time and experience during the process. Think of it like an internship. Eliza’s mentor is a former childhood friend, Jake Sanders. Both Jake and Eliza have huge crushes on one another, though they refuse to believe the other shares those same feelings.

Jake and Eliza spend a lot of time together during Eliza’s training and eventually uncover some nefarious elements messing with Eliza’s love enchantments. However, this subplot doesn’t really manifest until much later in the book.

In this world, Cupids are the only mythical descendants the public knows about, but the story introduces Furies, Nereids (sea nymphs), and more. And truthfully, the other descendants seemed more interesting to me than Cupids. I hope that future books leave the Cupids behind and focus on some other characters. I don’t have strong feelings about Valentine’s Day one way or the other, but all the “love” stuff and Cupiding felt so twee and saccharine. There are corny advertising jingles played on the radio for other Cupids. There’s a clear delineation on finding love the “old-fashioned” way rather than using technology, considering the Herman family business is of the “mom and pop” variety. It seemed like a coded lesson in “tech ruins everything” and nothing beats matches made with a more intimate touch. Listen, I’m a millennial and I’ve pretty much had it up to here on “how technology is ruining our ability to connect” thinkpieces.

Everything within the world building had a quaintness to it, including the focus on Cupid characters. It’s probably why I’d prefer any additional installments to give other mythical races a shot. I mean, hello…a Fury heroine? Yes, please.

Jake, as a hero, is adorable. He thinks the sun rises and sets with Eliza, and helping her build confidence in her Cupid abilities means more to him than anything else. If you love a gentle, supportive hero, you’ll love Jake. Eliza was a bit harder to pin down. She was fine as the heroine, but she gets shit on so much by the people around her. Eliza’s mom and brother frequently neg her and are vocally critical about her help with the business. Jake’s aunt makes it obvious that she doesn’t think Eliza is good enough for her nephew. It became a bit much too see everyone putting Eliza down in nearly every interaction and I really wanted her to tell everyone to go fuck themselves. When she does stand up for herself, I didn’t feel fully satisfied that she’d be appreciated in the future.

The book is clearly divided into two parts. The first half addresses the romance, while the second half focuses more on the mystery element. And while both were entertaining enough, I would have preferred more of a blend between the two, rather than it feeling like two very distinct acts. As a general rule, friends to lovers isn’t one of my top five favorite tropes and the romance lacked the tension I wanted. Plus, the mystery needed more time to develop, so it didn’t feel hooked onto the last half to three-quarters of the book. The mystery can’t really take root until Eliza gets into the thick of her enchantments and while it adds some extra momentum, it happens after the main couple has scaled their hurdles. It doesn’t pose a real threat to the romance and, given how light everything was previously, the big bad fight scene was a noticeable deviation from the otherwise sweet and bubbly lightness of the story.

This is a clear case of a book not being right for the reader. I prefer more tension in my romances and a couple who really has to work for and dig deep for their happily ever after. That’s not this book. There was no real threat of the hero and heroine not getting together, and most of the obstacles they faced weren’t in direct competition for their HEA.

Crazy Cupid Love war cute, but a little too cute for my own reading tastes. The cover blurb describes the book as “Percy Jackson for romance fans,” and that’s definitely not accurate. There are no summer camps or any real forced proximity elements, and the book focuses on the Cupid community rather than a larger ensemble cast of mythical characters. Any sort of combat or action is reserved for the book’s climax. If that blurb is why you pick up the book, just be warned that it’s not what you’ll be getting.

Ultimately, this was a fine read. There wasn’t anything I hated, but several elements of the book don’t fall into my catnip list. My continuation of the series will be predicated on the hero and heroines in further installments. For readers who enjoy a friends to lovers romance with a beta hero (paging Sarah), give this one a try. I do, however, give this book major points for its originality, as I can’t say I’ve read anything quite like it. Though there are other modern day mythology books with romantic threads, I liked the tongue-in-cheek the incorporation of the descendants. Descendants of Discordia thrive on chaos, strong women (like Ruth Bader Ginsburg) were descended from Athena, etc. It weaves pop culture in with the mythology, which appealed to my nerdery. But there’s a level of corniness to everything that often warred with my cynical nature.

Romances on the lighter end of the spectrum are often hit or miss for me. If you’re a reader who prefers things fluffier and sweet, though, this might be interesting to try.