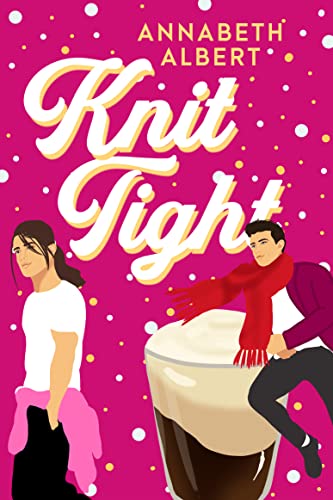 I expected to like Knit Tight. I mean, the odds of me not liking a romance featuring a knitwear designer hero are slim. I just didn’t expect to love it as much as I did. It’s a short book — 112 pages — but those pages pack a lot of feels. One scene had me ugly sobbing.

Brady has a lot on his plate for a twenty-three-year old. He’s raising his four siblings by himself after the tragic death of his parents and he’s barely making ends meet on his salary as a barista. Sure, he’s got amazing coffee-slinging skills, but his boss doesn’t appreciate him. A relationship is the last thing on Brady’s mind, until he meets Evren …

Ev is in town to take care of his aunt Mira while she undergoes treatment for cancer. Mira owns a yarn shop and Ev is a freelance knitwear designer.

I just drooled a little when I typed that because if a magical unicorn granted me a wish, I would probably wish for my very own Little Yarn Shop (LYS). Or to the have the talent to be a freelance knitwear designer.

Brady and Mira know each other well. Every month Mira hosts a Knit Night in the coffee shop. For those of you not in the know, a Knit Night (sometimes called a Stich ‘n Bitch) is when a bunch of people (usually 90% female) get together to imbibe copious amounts of wine and/or coffee and talk about knitting. At least, we’re supposed to talk about knitting. The reality is we wind up talking about everything except knitting. It’s basically a variation of the time-honored tradition of women sitting in the corner ostensibly working on their needlework while really plotting and laughing and maybe planning a murder or a coup d’état.

Knit Night is where Brady and Ev first meet and the sparks are immediate. Brady cautiously pursues Ev, but there are some hurdles in the way of them having a successful relationship. For one thing, both of them are caregivers, and their time and energy are consumed by their families. The other issue is that Brady is bisexual, and Ev has some hang ups due to failed relationships he’s had with bisexual partners. He conflates bisexuality with promiscuity and Brady calls bullshit on that pretty fast.

I didn’t expect Knit Tight to be as emotional as it was for me, especially given it’s length. The caregiver storylines really punched me hard in the feels. Brady doesn’t have perfect plot-moppet siblings. These are real kids that he’s raising, and he’s still a kid in many ways. He’s twenty-three, for God’s sake. The strain of taking care of his siblings while maintaining his sanity is very real. Arguments are had over who got the most chicken nuggets. He has no privacy or time for a sex life. Sleep is non existent. At times he feels angry about being placed into a position he never asked for.

Similarly, Ev is taking care of a terminally ill relative with no family support. His own family rejected when he came out and it was Aunt Mira who raised him. He would never dream of leaving her to face her illness on her own, but caring for a sick family member is emotionally and physically draining.

There are wonderful scenes where Brady and Ev’s relationship grows as they snatch moments out of their schedules. They watch TV together while talking on the phone and doing chores. One of the most adorable moments in the book is the two of them bonding over Storage Wars. They both struggle with the guilt of wanting a relationship while their obligations make that nearly impossible.

I think the thing that was so heartfelt to me was Ev and Brady standing by each other during their worst moments. They hold each other up when everything feels too big and impossible. I’ve been caring for my mom post surgery and I know how tremendous it is to have the love and support of a partner when you’re trying to balance multiple roles: caregiver, employee, friend, wife, etc. So to me, moments that might seems small, like Ev offering to watch the kids, were really huge and poignant.

Knit Tight is a truly beautiful novella and my only regret is that it wasn’t longer.

Well, I have one other regret, too: at one point Ev makes Brady a pair of socks (from his original pattern which he calls “Barista Blues” SOB) and if that sock pattern had been included in this book I would have completely lost my shit.

If you want a short emotionally satisfying read, then Knit Tight is the book for you.