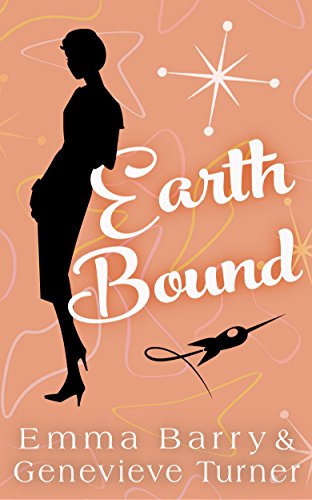 STEM characters alert! Earth Bound is a historical romance set in the early 1960s, part of the Fly Me To The Moon series. Before I go any further, may I say that it is refreshing to see a historical that isn’t set in the Regency Era, the Victorian Era, or the 1920s. I love reading romance in those time periods, but I also think that setting a romance series in the 1960s during early days of the space race is a creative, interesting choice.

In this book, two engineers work together at the American Space Department (a fictional stand-in for NASA). From 1961 to 1963, they work together, have a no strings attached sexual relationship, and fall in love. They have a lot of hot sex and they do a lot of math, although, as I recall, not at the same time.

Charlie is a computer engineer. She works with analog computers and wages a campaign to switch to digital as computer science advances. She also works closely with human computers (think Hidden Figures). This means she has to be good with numbers, machines, and people. On top of that she is a woman in a high level position in the early 1960s so she has to be assertive yet diplomatic.

Eugene is the Director of Engineering and Development. Charlie reports to Hal, who is an idiot. Hal, and a lot of other people, report to Eugene. Because Hal is an idiot, Charlie and Eugene consult often. It helps that Charlie is the only person in the department who doesn’t think Eugene is scary. He has extremely high standards and he’s very abrupt, both of which are traits she can live with.

Eventually Charlie and Eugene begin an affair. They meet periodically, always at the same motel. They do not cuddle or sleep over. They do not talk about work at the motel and they do not talk about sex outside of the motel. The idea is that they won’t talk about anything personal at either the hotel or work (the only two places they ever see each other). They neither love nor like each other; they just seem to share an identical need for a release valve from stress and sexual frustration. Of course eventually their conversations do become more personal and lead to true love.

The chapter alternates between Charlie and Eugene’s point of view. This is important because it means that the reader can feel secure about Eugene’s motivations. An obvious red flag in the book is that Eugene is Charlie’s boss. Normally that would be a no-go for me, and I think the primary reason it works here is that while Charlie and Eugene have a lot of secrets from each other, they don’t have secrets from the reader. Sexual relationships between bosses and subordinates were regarded very differently in the early 1960s than they are today, but the fundamental power imbalance remains the same. We can see into Eugene’s head, so we know he’s not planning to coerce Charlie. Because they aren’t allowed to talk about work at the hotel, it’s as though they are different people at the hotel than they are at work.

Eugene and Charlie are opposites only in the ways that they manage their subordinates – Eugene is intimidating, whereas Charlie is warm and encouraging. Both are people in high stress jobs who spend almost all their time at work. Both present carefully developed facades to the outside world. Both cherish having a sense of control. Their sexual relationship allows them to have the opportunity of surrendering and maintaining control at the same time. They also have a deep respect for each other, even when they are at odds.

When Eugene and Charlie aren’t at the motel, they are at work, and the workplace stuff is written with as much care as the romance stuff. The engineers look down on the astronauts and the astronauts don’t trust the engineers. Even though the workplace is male-dominated and saturated with sexism, the rising number of determined women can’t be ignored. In addition to Charlie and the women who work as computers, the first group of women starts training to be astronauts by the end of the book. This group is analogous to the Mercury 13, a real-life group of women who underwent astronaut training in the 1960s.

The book doesn’t get too technical, but it does hammer home in the most vivid terms that everything needs a backup and that absolute precision is a must. At one point Eugene gives Charlie a hard time because she promises to have something done in twenty-two seconds and it actually takes thirty seconds. Charlie thinks to herself:

This was the problem with working with engineers. Scientists were precise, yes, but there was room for improvisation. An engineer took precision and turned it into torture.

Eugene’s insistence on precision, Charlie’s insistence on back-ups, and the astute observations of the human computers are crucial parts of a huge system of janitors and astronauts and engineers and loads of other people. This book doesn’t show the sweeping glory of space flight but it does show the excitement of being part of such a vast and monumental project.

Earth Bound is Book Three in the Fly Me To The Moon series. The one I’m most desperate to read (Star Crossed) seems to be off the market – but on the other hand Book One, Stardust, is free as of this writing.