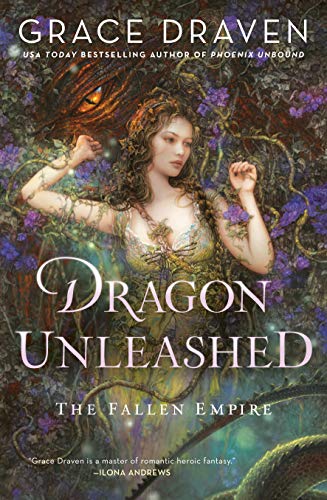 Major warnings here
CW: Graphic violence and torture, mentions of rape, sexual assault, and slavery, especially in regards to a woman with a disability. The heroine is a product of rape. Her mother, who is described as having a “childlike mind” due to head trauma she suffered while younger, was abducted by slavers.

Dragon Unleashed is a lovely and tender romance between two people who often feel misunderstood by the world around them. Unfortunately, the rest of the details outside of the romance are depressing as all get out. It’s not a fun world to be in and as a result, I did frequent skimming during the chapters that didn’t focus on the hero and heroine.

Before we get into it, I do want to answer the biggest question that most readers will ask: since this is the second book in a series, can this story be read out of order? My answer is a shrug. You could definitely get away with it, though the beginning of the book overlaps with the end of the previous one, Phoenix Unbound. The Big Bad is also the same villain from Phoenix Unbound, so you won’t miss out too terribly on any backstory. The tl;dr of it is that the villain is fucking awful and that’s it. (A little rant on that later.)

Halani is a character we first met in Phoenix Unbound. She’s part of a group of travelling free traders and keeps her healing and earth magic a secret. The leader of the traders is her uncle and her mother travels with them as well. Malachus, the hero, is a dragon shifter, cursed to stay in his human form until he locates his “mother-bond,” a piece of bone from his dragon mom. He’s been tracking the mother-bond for ages in the hopes of being freed from his fleshy, human prison (hard same).

As I said before, the actual romance here is the absolute sweetest. Malachus is a beta dragon hero, who has this weird knack for saying the most gooey, heart-melting things to Halani. Halani’s mother, Asil, is a precious figure to her and a horrific set of circumstances has left Asil with lasting trauma and an intellectual disability.

Malachus and Halani are equally gentle with one another. Malachus is emotionally competent and understanding, noting how he “cried rivers of tears” when he lost his own mother.

Halani’s impression of Malachus’s friendship with Asil is so touching:

No one outside their caravan had ever viewed Asil the way Malachus did, and even then that view differed from theirs. Differed from hers. He was patient with Asil, kind, and most stunning of all, respectful. He recognized the child living within the woman’s body and still treated her observations with the considerations reserved for an adult. He called both mother and daughter unique. Despite her efforts to remain aloof, Halani began to think him extraordinary.

And here’s Malachus remarking on Halani’s deep affection for her mother:

What must it be liked to be loved this way? So devotedly that the person you parted with cried at your absence even before you left? He had known affection in his life, sincere if distant. This was something else, something he had no experience of. In that moment, he wished he did.

LOOK AT THESE TWO SENSITIVE GOOBERS!

The slow gentle burn between these two is so satisfying and hard-won and just damn beautiful. It’s a courtship that serves as a reminder of why I love reading romance.

But, and of course there’s a but, I wish I enjoyed literally anything else about this book. I can handle darker themes, though I’m finding now is not the time, and I honestly wished the tone of mutual respect and the hesitancy that comes with not wanting to fuck up a really good thing was matched in the larger scale of the story.

Dalvila as the villain was awful. She was an awful person and an awful character and I hated her for the sheer one-dimensional, tortuous, hyper-sexual villainess she was. She had no morals, no redeeming qualities to make it seem like there was more to her than cutting people’s limbs off and banging. Not that there’s anything wrong with the latter, but I’ve grown tired of the hypersexual villainess in romances. If it’s a woman in the antagonist role, she tends to be extremely sexual and aggressive. I’m thinking of every “former mistress” I’ve read in a historical romance or the “puck bunnies” in sports romance. And I’m just over it.

As I read, I’ve come to realize that I have particular tastes when it comes to romance catnip for what is keeping a couple apart. Of course, I don’t want it to be too easy for them, but I also think a serial murderer/torturer who threatens the lives of children is nowhere near the happy medium I want. Having Malachus and Halani on a road trip of sorts, while Malachus tries not to get attached because he will eventually turn into a dragon and with Halani trying to keep her magic under wraps, would have worked perfectly fine for me.

I reviewed Phoenix Unbound and definitely had some thoughts about it and I think some of those definitely carry over here. I liked the romance better, but overall, the world was still too grim for me right now. On top of the quarantimes, I’ve had some personal family tragedies, and reading a book about the enduring power of love while severed limbs and horrible treatment of women are peppered throughout was a combination that did not work for me.

If you’re in the same boat, where your brain can only handle so many shitty people and shitty things, either skip this one or prepare to do a lot of skimming. Thankfully, the chapters that focus on the villainy are quite obvious. I do want to reiterate that Malachus and Halani are adorable and any time they’re interacting, it turned me into a melty puddle. Unfortunately their sweetness wasn’t enough to balance the bleakness of the story happening around them.