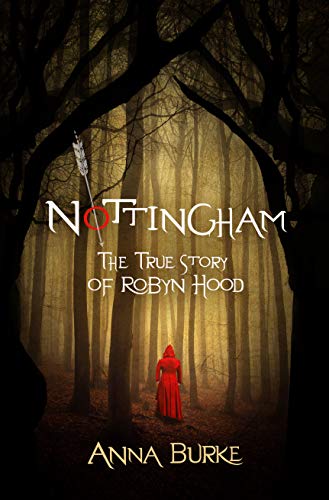 Have you ever said to yourself “I want to read a Robin Hood story, but full of lesbians and other queer people?” Well, good news! Because that’s exactly what Nottingham is! I couldn’t have come up with a more joyfully queer interpretation of it if I’d tried. That said, it’s specifically the queer rep that’s joyful and not much else, because this is a gritty adventure story where the only foxes in it are ones that get hunted. Not like these ones, even if I did think about them every so often while reading Nottingham.

This is Robyn’s origin story. We see how she goes from being a bow and arrow maker in Nottingham to the leader of a group of bandits in Sherwood Forest. And these bandits? They’re on a mission to prevent the largest tax in England’s history from taking down everyone they know and love.

The first person Robyn meets in the woods is Little John, a giant, burly trans man who could beat the shit out of anyone. John takes Robyn under his wing because he used to be the blacksmith’s wife and knows what it’s like to build a new life outside the eyes of Nottingham’s society. He’s comfortable talking with Robyn about his past life and name, and how he’s now living authentically as a man. John advises Robyn on her hair and clothes so she can better pass as a man when she needs to for her own safety.

One day, Robyn and John stumble across a passed-out, puffy-faced Marian in the forest, and Robyn insists they take care of her against John’s better judgement. Turns out, Marian had been knocked out by a tree branch when her horse ran into some bees and took off like its tail was on fire. Robyn and John help Marian with her beestings and headache until she can head home to her friend’s castle, and John hopes that’s the end of that. Of course it’s not, because that meeting is just the beginning of Robyn’s gigantic crush on Marian and Marian’s own first crush on a woman, since she quickly realizes that Robyn is not a dude.

So, how faithful is Nottingham to other Robin Hood stories? Hard to say, since my frame of reference is entirely based on 20+ year-old viewings of the Disney cartoon, Robin Hood: Men in Tights, and Robin Hood: Prince of Thieves. A connoisseur, I am not, even if I did have a giant crush on Mary Elizabeth Mastrantonio as Marian when I was 12. That said, most of the characters were familiar to me, and I was delighted by how queer most of the people associated with Robyn and Marian are. I loved seeing a genderflipped Robin Hood, Will Scarlet and Friar Tuck. Robyn and Willa are both lesbians, Willa’s in love with a bisexual bard, and there are lesbian nuns. And again, the inclusion of a trans man worked well for me, although I can’t speak 100% to the trans rep since I’m not trans.

The way these folks band together to form a tight-knit found family is beautiful and it reflects what many LGBTQ+ folks have to do every day. They find their people, love and comfort them even when they’re ready to give up, and fight side-by-side with them to kick injustice in the butt. Even when Robyn tries to protect them by going it alone, there’s a very strong “fuck that, we’re in this together” pushback from the rest of the group, because they’re a family who knows they’re stronger together. That means that Robyn and the whole crew are ready for one hell of a final fight at the end, even though the odds look insurmountable.

Marian’s journey of figuring out her attraction to Robyn is another element of Nottingham that’s particularly relatable for anyone who’s questioned their own sexual orientation while in an environment where it’s not safe to be anything other than straight. At the beginning of the book, Marian is confused by what she sees when she walks in on two of her female friends having sex. She often flashes back to that moment and thinks of these friends as she works through the feelings that bubble up when she meets and continues to interact with Robyn. Marian’s feelings for Robyn also grow at the same time that she deals with her distaste for Linley, the old, creepy man her father wants to marry her off to.

It was a sin to crave the touch of a woman as one should crave a man’s. The church rarely spoke of such things, but Marian knew them all the same. Sex was for marriage. Marriage took place between a man and a woman. Without a husband, a woman depended on the charity of her family, unless she was a widow. Widows, at least, might inherit businesses and estates and rule in their own right, but few other options besides the church presented themselves.

I could marry Linley and then poison him. First, however, she’d have to consummate the marriage, and that carried the risk of pregnancy and death.

Who am I becoming?

This was why such things were sins. She’d jumped from lust to murder, all in the space of a night, and before that she’d committed treason by helping Willa escape her father’s will. If only she had never come across them at the priory.

If only she had never fallen from her horse and looked up into a pair of eyes that held the forest at their heart.

If only her very blood had not been contaminated by this devastating want.

TW/CW
(Heads up: that passage is right before Marian cuts herself, hence the CW for self-harm.)

Marian’s overall journey of breaking out of the expectations her father and Nottingham’s society had for her, and grasping onto a life she wanted for herself, worked so well for me as a reader. And Robyn and Marian’s happy ending? It’s very, very good and left me totally content.

Like I mentioned in the intro, Nottingham isn’t a lighthearted read. This is a world where the divide between the richest and the poorest is vast, people are hanged for poaching, many of the bandits in the forest are vicious, and the Sheriff and his men are fucking awful. I was constantly waiting for something terrible to happen when I was reading it, with my internal threat detector running on high for much of it. That made Nottingham a very easy book for me to put down (at least, it was until I hit the last third and then you couldn’t have pried my Kindle from my hands).

Looking back, I see now that I shouldn’t have read it during the winter, because that’s literally the worst time of year for my anxiety and I’m usually careful not to engage with media that will spike it. I’m glad I did read it, however, because it’s such a great story with memorable characters, strong found family rep, and ass-kicking queer ladies and gents. I will most definitely read it again, but I’ll wait until the summer before I do. And with the way things wrapped up at the end, I hope we’ll get more adventures of Robyn Hood, Marian, and the rest of their pals.