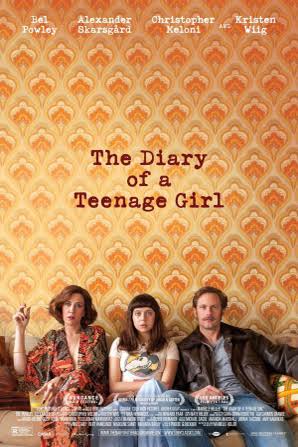 This is a tiny independent movie that explores the messy, glorious, horrific, and amazing inner life of a teenage girl and how the world is utterly unprepared to allow girls to be girls. It marks the sexual coming-of-age of a 15 year old, Minnie, in 1976 San Francisco, which begins when she enters into a sexual relationship with her mother’s boyfriend. It’s based on a critically-acclaimed graphic novel by Phoebe Glockner.

This movie touches on sexual exploitation, drug use, and terrible parenting, so warnings for all of that.

Before we go on, I want to talk about my word choice of “enters into.” The movie finds a really delicate balance of allowing Minnie her own agency of wanting to have sex with this older man who’s dating her mother, but also condemns him for his actions which manipulated her into it. He had the responsibility of putting a stop to things, and he never did, and the movie is VERY clear about that. I have seen many women talking about how they had sexual relationships with older men who were in positions of power over them, and had you asked them at the time, they would have said absolutely they had full agency over their actions, but looking back on it now, they can see that they did not. So allowing Minnie to still be a person and not purely a victim in this is a hard line to walk, and an important line to walk, and the movie got it.

A
Minnie (Bel Powley, who is 23 but looks like a squishy-faced 15 year old and is brilliant) lives with her mother (Kristin Wiig) and her younger sister in San Francisco. It’s 1976 and there’s a lot of drugs and questionable fashion choices being made. Her mother’s boyfriend, Monroe (Alexander Skarsgård in a creepy pornstache) is always hanging around, and her stepfather, Pascal (Christopher Maloni), lives in New York. After she has sex with Monroe the first time, she begins keeping a diary on cassette tape with all of the messy, complicated feelings you have when you’re fifteen and trying to figure out who you are.

As she explores what sexuality means for her, she makes a lot of questionable choices, and it’s clear that while her mother loves her, she doesn’t really know how to relate or how to set boundaries. In one of the early audio entries, she talks about how she’s so ready to be loved by someone, and just wants someone to touch her. It’s heartbreaking, because you can see how those feelings can lead people (but it’s often girls and women) into exploitative relationships. You’re so desperate for love (and she confuses love and sex) that you’ll put up with a giant raft of shit to keep it, and you can be manipulated into something you would not have done otherwise.

And we see glimmers that her mother went through the same thing, but this is through Minnie’s point of view. It’s a very complicated relationship and so realistic. Kristen Wiig’s post-Saturday Night Live career has been so fascinating, and I love watching her do her dramatic turns. Skarsgård (who, you may remember from True Blood and god help him Battleship) manages to make this statutory rapist and manipulative fuck a full person.

The style of Diary incorporates animation and elements from the graphic novel, so people become animations, and we get a stylized interpretation of an acid trip. It’s easy to overuse a trick like that, and the movie doesn’t.

Diary is written and directed by Marielle Heller, and this is her first director project. This story couldn’t have been told by someone who didn’t experience what it was like to be in the head of a teenage girl, and while I’m not going to pretend that the events are representative of all teenage-girlhoods (Minnie is white and middle class), I do think that the movie allows this particular girl to sort through the things that make her, her without condemning her for it. The film shows an understanding that being a mess is something the world is unwilling to tolerate while she finds herself in that mess. No, messes get exploited. It’s not all about her relationship with Monroe, either.

The best thing about this movie is how it manages to balance several things, but most importantly, it let all of the characters be three dimensional people, even Monroe.  Minnie isn’t a saintly perfect kid: she’s self-centered and thinks she knows everything and is talented and wants to love so hard. Her mother is trying her best but is fighting her own demons- some of them self-inflicted. Even Monroe isn’t played as a purely terrible person. He does terrible things, but the audience needs to see why he can get away with them without asking why would Minnie be into this asshole? Why would her mother date him at all? The reality is men who prey on girls like him don’t come across as monsters, and seeing that and understanding it so important.

Heller is directing the Ruth Bader Ginsberg project that is starring Natalie Portman (and Portman, bless her, delayed the project from going forward until they hired a female director), and I am going to be very interested in what she does next.

The teen years are a time to try on new identities and cast them away, and somehow we need to create a world where girls can figure out who they are, where they’re both protected but have room to grow. I don’t know what that world looks like, and I don’t think anyone else does, either, but I think we all know that it needs to happen. The movie ends with the words, “This is for the girls who grew up.” As in the survivors who made it through and went on the create art and music and save the world and become the people that would have saved their teenage selves.

The Diary of a Teenage Girl is in select theaters now and you can find tickets (US) at Moviefone and Fandango.