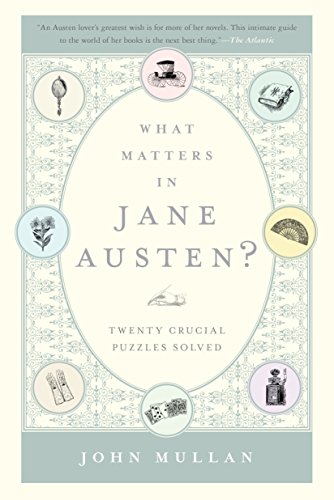 What Matters in Jane Austen?

What Matters in Jane Austen is a fantastic piece of literary criticism that reveals a lot of new angles on Jane Austen. It’s entertaining, it’s approachable, and it’s incredibly helpful if you want to understand the nuances of Austen that are either very subtle or which would have been obvious to her contemporaries but not so much to modern readers.

Critic John Mullan divides his book into twenty short chapters. They don’t need to be read in any particular order – you can pick and choose from the ones that interest you most, although I read the book straight through and enjoyed it greatly. Examples include:

Everyone will come away with a different highlight from the book, based on where your interest lies. I found the chapter about “The Lower Classes” to be incredibly helpful and insightful, as well as the chapter on “What Do Characters Look Like,” because both chapters pointed out the difference between what modern readers know and what Regency readers knew.

[NB: in this review, I use the term “contemporary readers” to mean “Austen’s contemporaries,” i.e., readers who were alive during the time she was writing and publishing, and thus reading her books in the time period in which they were written. ]

So there are scenes in which Austen’s contemporary readers caught a level of intentional dissonance in scenes in which a character is acting happy or romantic while dressed entirely in black — for instance, Frank Churchill describing his happy prospects at the end of Emma. Most readers today miss this nuance because Austen doesn’t say, “He was in mourning so he was wearing black, and this is symbolic and either ominous, funny, or both.”

The fun thing about Austen is that the books appear to be very simple but they are so full of complexity that you can talk about them for years and never run out of new things to discuss.

Look at the plot of Pride and Prejudice, for example: Rich Boy meets Poor Girl, they hate each other on sight, then they fall in love and get married, THE END. Within this framework, readers can find material about class, money, sex, marriage, sibling relationships, family, humor, pathos, illness, death, the importance of babies, inheritance law, fashion, manners, economics and race, and writing technique. Every Austen book is like a TARDIS – an infinitely expandable series of rooms containing infinite treasure.

I loved that this book completely avoided being pedantic and yet it was original, insightful, and helpful to me as a reader and a writer. There’s nothing dumbed down about this book, but it’s not pompous in the way that literary criticism can be pompous (and I say this affectionately, as an English major who read a shit ton of highly academic literary criticism back in The Day:

Instead, this author offers passages like this one, from the chapter, “How Much Does Age Matter?”

In the 1940 Hollywood film the role was taken by British character actor Melville Cooper, then aged forty-four. The trend was set. In Andrew Davies’s 1995 BBC adaptation Mr. Collins was played by David Bamber, then in his mid-forties. In the 2005 film the role was taken by a slightly more youthful Tom Hollander, aged thirty-eight. Yet Mr. Collins is introduced to us as a “tall, heavy-looking young man of five and twenty’ (I.xiii). Adaptors miss something by getting his age wrong. His solemnity and sententiousness are much better coming from someone so ‘young’. Middle-aged is what he would like to sound, rather than what he is.

Not only does the author point out that modern readers are likely to see Mr. Collins differently than Austen’s peers, but he also shows how this change happened, and in the process lets us in on a joke that I somehow always missed.

Other chapters talk about the technical aspects of Austen’s writing that make her so important as a literary figure. It’s all just terrific – so go find yourself a copy. This book is both a great resource and a great diversion!

What Matters in Jane Austen? by John Mullan