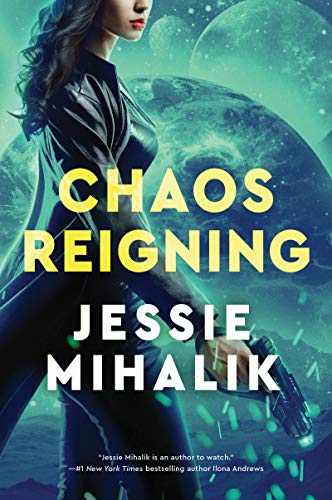 Note: spoilers for the first two books in the Consortium Rebellion series follow.

The third book in the sci-fi romance Consortium Rebellion series, Chaos Reigning, follows the baby of the powerful von Hasenberg family, Catarina (or Cat for short) in her quest to root out any remaining culprits in the kidnapping of her eldest brother, Ferdinand. I liked the first book in the Consortium Rebellion series and I loved the second book, so my hopes going into the final volume of the trilogy were high. Sadly, while I did enjoy this installment, I think it was my least favorite in the series.

This was too bad, as it got off to quite a strong start. Cat is presented as the most charming, socially savvy von Hasenberg sister in previous installments of the series. I’m always intrigued to get a glimpse into the inner life of a social butterfly heroine. Cat feels some insecurity that so many people have bought into her frivolous ditz facade. She is a little annoyed by the managing nature of her older siblings because it plays into her feelings of insecurity. So, she’s not delighted when her older sister Bianca (heroine of book 2) enlists Aoife and Alex (a pair of genetically engineered supersoldiers who also appeared in book 2) to guard Cat as she goes to a house party to search for information. To better ensure Cat’s protection, Cat eventually agrees to let Alex pose as her lover at the party.

I LOVED the section of this book that took place at the house party. Fake relationship + mystery at a house party are two of my absolute favorite historical fiction tropes, so I was super tickled to see them in a sci-fi romance. The combination of high-tech spy shenanigans with social maneuvering rooted in arcane, hierarchical manners is truly delightful. There’s a particularly fun hoverbike racing sequence where everyone is wearing fancy riding habits that is just such a wonderfully bizarre mishmash of English country house party and dangerous sci-fi action sport. Additionally, the tension between Alex and Cat as they navigate their forced proximity and try to sell the other guests on their romance while unsure of each other’s attraction level is pretty steamy.

Unfortunately, the house party aspect ends with catastrophe less than half of the way in and most of the rest of the book is a churning parade of spaceship- or military base-related action. My enjoyment of the book gradually decreased from the close of the house party subplot on, until I was left feeling tepid. The romance ended up being kind of meh for me, the plot was a little bloated, and the stakes did not feel particularly gripping or urgent.

Alex is definitely more fleshed out in this book compared to his “strong and silent” type appearance in book two, but not by much. I learned almost nothing new about his life or backstory from this book. He seems to have a good sense of humor and knows a lot about being a supportive, empathic partner, but I did not really understand why he is that way, which made it hard for me to connect with him as a character. However, I did appreciate all of the references to his thick, muscular thighs. Gimme those giant, head-crushing thighs in a hero. I also appreciated at least on an intellectual level that he is a different, quieter kind of hero than the more alpha-domineering type we see in Marcus and Ian, the first two heroes of the trilogy.

Alex and Cat definitely have chemistry, but they have almost no interpersonal tension for most of the book once they admit that they are attracted to each other. The main issue in Alex and Cat’s romance seems to be finding sufficient uninterrupted time to enter the bone zone between all the running and fighting. This will probably be great for people who like low-angst romance, but it bored me. Give me people still crushed under the awkwardness of fights from three years ago or critical misunderstandings from last week! For me, two people who get along and are attracted to each other and know both of those things about each other are just, like, on a good Tinder date, and I don’t particularly want to read a book about them.

In addition to feeling like I could take or leave the romance, I found that the last half of the book dragged on a bit. As the plot opens up and becomes more about saving the world than ferreting out information, the sequences of running away from something while on a spaceship, storming some dangerous stronghold, and then regrouping start to feel a mite repetitive. I feel some of the more standard sci-fi shenanigans in the second half of the book suffer by comparison with the fresh-feeling first half. The denouement of Chaos Reigning is also QUITE long. I realize this is because it’s a series closer, but since I was already losing patience at that point I was ready for the book to wrap up.

I think the main reason why the plot feels bloated is because I had trouble getting invested in the stakes once the house party ended. Even though the squad of heroes has to save the world against (supposedly) near-insurmountable odds, none of the obstacles seem like they pose any significant challenge. Problems come up and are vanquished so quickly that they barely even register. Characters get captured and then escape 20 minutes later. People get shot, slap some regen gel on the wound, and keep going at full speed. Plans get delayed or complicated, but never seem to fail. There was no moment where I credibly felt for even a moment that things might not work out pretty much perfectly for everyone good. It’s important to me that a book can generate that anxious, peeking-through-the-fingers feeling even when I know in my mind that it’s a romance and of course there will be a happy ending.

This feeling of no real stakes extended to Cat as a character. While I found Cat’s struggle with the fact that people believed her ditzy facade relatable, the fact that she was so relentlessly good at everything tempered my enjoyment of her because none of her personal challenges felt particularly hard. She has superhuman strength, speed, and night vision as a result of genetic engineering (this is revealed very early in the book, so I don’t think it’s really a spoiler). In addition to being super rich and powerful like everyone in the von Hasenberg family, she is evidently a social queen, a crack pilot, an excellent strategist, and a tech whiz. Plus, everything is made easier by the fact that most of her opponents seriously underestimate her and anyone who is not her overt enemy seems to adore her and will go to great lengths to help her.

One of the reasons why I loved Bianca’s book, Aurora Blazing, so much was that Bianca had strengths but was not a superhero. Her unusual talents as a result of her husband’s experiments came with some very real drawbacks in the form of pounding headaches. This put a hard limit on what she could accomplish at a given time. Cat’s unusual talents come with the drawback of…her feeling weird about them. I wanted to continue to care about the way she consistently downplays her contributions and is afraid people think she’s actually shallow and incompetent. But since her level of talent and skill did not feel realistic, her struggles really did not either. I definitely did not dislike her as a heroine, I just did not feel that invested in her.

So, for all of those reasons, while I was glued to Chaos Reigning initially, I felt less and less connected to the characters and story as the book went on. When the inevitable triumph occurs, my reaction was more of a “yay, I guess?” than cheering from my balcony.

I feel like I’ve been quite harsh in this review. I genuinely loved the first half or so of this book, and while it wasn’t particularly gripping, I did still like the rest of it. It was light fun. At the end of the day, I do love a solid space opera, and Chaos Reigning is that. The world-building is great. There are some great secondary characters I would love to see again (give me a Ying Yamado/Aoife spinoff!). I think if you have enjoyed the series overall this is a worthwhile read, but I wish my expectations had not been so high coming off the second book.