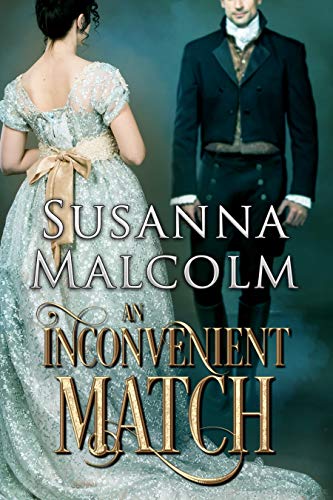 An Inconvenient Marriage by Susanna Malcolm is a Regency marriage of convenience novel, which is normally my jam. Unfortunately the hero spends so much time with his head up his own ass that I can only assume it would take a team of highly trained medical professionals to get it back out again (Paging Dr. Nips, Dr. Nips to Proctology….).

Honora Botham is an heiress of no small fortune, which means she can marry pretty much whoever she wants. When the novel opens, that person is the Earl of Ashland aka “Ash,” who is so drunk at their wedding that it’s a marvel that he gets through the vows without passing out. Why would Honora, a woman in possession of immense fortune and no small amount of independence, marry a guy so inebriated that he’s five seconds away from peeing his own britches, you ask? Because it’s her dream, and the dream of her late grandmother, I guess, that the family be elevated to the peerage.

So after a super disappointing wedding night (during which Ash is drunk and it’s basically thrust-groan-snooze) Honora goes to Ashland Park and starts using her considerable funds to restore the crumbling family seat.

Unfortunately that’s the theme of the book: Honora uses her resources and intelligence to start setting decades of malfeasance right while Ash drinks and pouts because his family is aristocratic, but poor.

Fairly early on Ash throws an actual temper tantrum because he realizes that part of his marriage contract stipulates that Honora maintains control of her money, with the exception of his allowance. He feels emasculated and lied to, except he definitely had the opportunity to go over these documents before his wedding and he didn’t bother. He didn’t read the fine print and now he’s real upset, you guys.  He assumed he’d get control of the money as the husband.

I swear to God, if Ash were a present day hero, he’d somehow be involved in the Fyre Festival.

Honora spends much of the first portion of the novel alone, fixing things. Ash is off having a man-baby pout. His mother largely rejects her because she’s not of their class. His younger sister, Margaret, is the only person who isn’t actually shitty to her. When Ash does show up, it’s to have lackluster sex.

Here’s the thing: I’m fine with books wherein we have two partners who need to learn how to have sex, due to their relative inexperience, with each other or at all. Sex is often about communication and openness, so having that as a bridge to the main characters’ slowly learning about each other (especially in a scenario like a an arranged marriage) is fine with me. Some of my favorite historicals have had disappointing sex as a device that forces that main couple to really communicate.

The problem is, that’s not what’s happening here. Ash is showing up to Honora’s bedroom drunk. He does the bare minimum to turn himself on, and then it’s pretty perfunctory from there. He doesn’t think about or care about Honora’s feelings or needs. He doesn’t even consider her enjoyment or whether or not she’s sufficiently aroused to even be comfortable.

That’s a big ole nope from me.

Eventually all of this shifts to him actually putting in a effort (read: foreplay), but that’s after he watches the maid help his wife take a bath through a crack in the door and masturbates while doing so. Honora has no idea he’s looking at her, let alone looking at her and pleasuring himself, and the whole thing was incredibly creepy to me. It takes an act of non-consensual voyeurism for Ash to realize that his wife has a body that might actually turn him on—and again, that’s the sum total of the amount of consideration he’s giving her. Also the maid, who was somehow dragged into this whole nonsense just by doing her job, is largely ignored and while I think he was masturbating in spite of her presence rather than due to it, the whole thing was still super gross.

As the book progresses, they go from having bad sex to good sex which is apparently the door to having a more fulfilling relationship. Ash is still butthurt that Honora has control of the family finances (and therefore pretty much everything) but as his penis starts to have feels for her, so does his heart, I guess.

Honora, for her part, has a lot to deal with. Ash is involved in some of it:

Honora has to do 98% of this without Ash’s support or insight. He does help a bit with regard to the “being accepted by society” thing, but it’s mostly to tell her that as a countess she really doesn’t have to give a fuck what anyone thinks of her. He barely makes an appearance at his own younger sister’s Season, which Honora points out is an issue because his mom is too busy enjoying her own re-entry into society to pay a ton of attention to what her daughter might be doing. When we get to the crisis moment for the external conflict, Ash finally shows up, but it was far too late for me.

I was left with the feeling that Honora experiences most of this book painfully alone emotionally. She’s in a situation where she (as a commoner) is an outsider, and she and Ash never really form a partnership. Even though this was a romance novel, I couldn’t help but feel a sense of pervasive loneliness for the heroine, which is heartbreaking.

We have a hero who does none of the work (emotionally or physically), is butt-hurt about a marriage contract he didn’t bother to read OMG, has bad sex with the heroine because he can’t be bothered, and by the very, very end of the book might have a feel about her after he gets off watching her take a bath without her knowledge.

This guy is at best useless and at worst actually detestable.

If you want a historical where the hero makes an appearance once in awhile to whine, but the heroine does all the labor, emotional and otherwise, then this is right up your alley. For me, it was a huge nope.

An Inconvenient Match by Susanna Malcolm