First of all, this is not a post about stuff you should be doing during quarantine. Unlike any jackwagons advocating we completely transform ourselves mentally or intellectually during quarantine, I personally see this as a traumatic time and it’s really important to be gentle with ourselves. This post is just about what helped settle my anxiety brain right now, in hopes that maybe it would help someone else, too.

As I’ve mentioned many times, knitting typically soothes my anxiety. It gives me something to focus on other than the hamster running on the wheel in my brain. Right now I’m feeling overwhelmed, though, and I’m struggling to focus. I bought a few books on how to knit sweaters before realizing that learning something new was a bad idea right now. I don’t have the emotional bandwidth to try learning a new type of project and deal the with frustrations and mistakes that come along with that process.

In fact, pretty much the only thing I wanted to do related to knitting was look at pattern books.  A few of my local yarnstores are doing something called “Quaranskeining” where they send you a mystery bundle of yarn and the corresponding needles, notions and patterns to use it. As I was flipping through my knitting books I thought, what if I do that for myself but with my own stash?

It wouldn’t be a mystery, of course, but I could pair yarn to patterns and organize it all in one of the eleventy billion project bags I have. That way, when my brain was ready to start knitting, I could just grab one of the bags and go. I’d already have the yarn selected, needles and notions in place, and pattern ready to go.

So the first thing I did was dig out my stash. 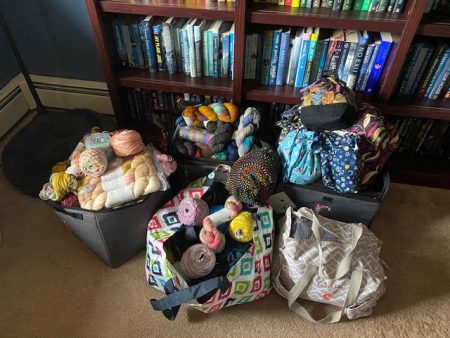 No, this is not all of it. I have more yarn in my basement. These are my most recent and prettiest acquistions.

If you’re squinting you can see that there’s a lot of Hedgehog Fibers, Round Mountain Fibers, Freia and Miss Babs yarn in there.

Once I had everything sorted I began pulling yarn and matching it to patterns that I want to knit. I recently purchased both of Melanie Berg’s shawl books, such as Colorwork Shawls: Tücher stricken mit Farbe – Knit in Color, ( A ) and I really love what she’s doing with color and texture.

I also bought Harry Potter: Knitting Magic by Tanis Gray ( A | BN ) and this book is amazing. It has tons of beautiful patterns inspired by the Harry Potter films as well as behind the scenes looks at the movies.

Here is some yarn (Round Mountain Fibers and I think two old skeins of Tosh Merino Light) that I put together to make A Gentle Hug by Melanie Berg. 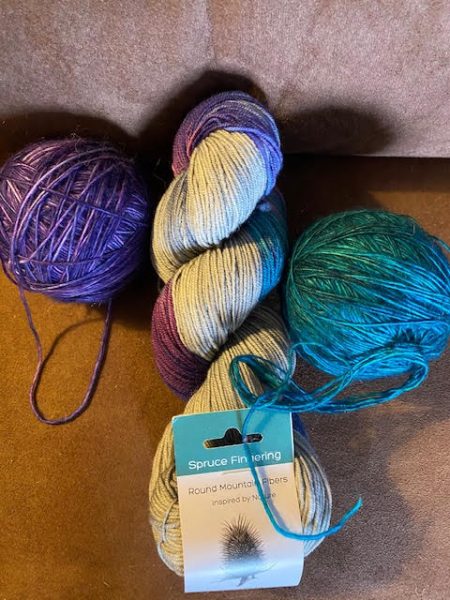 By the time I was done sorting and pairing, I had a dozen projects in bags, ready to go whenever my brain decides it can knit again. I’d also repackaged my stash by color so I’ll have an easier time finding things moving forward.

Has social distancing sent you stash diving? Do you have a special project you’re making?