The Ripped Bodice is back with another round of Summer Romance Bingo. Visit their site for a printable bingo card and rules on how to win prizes! 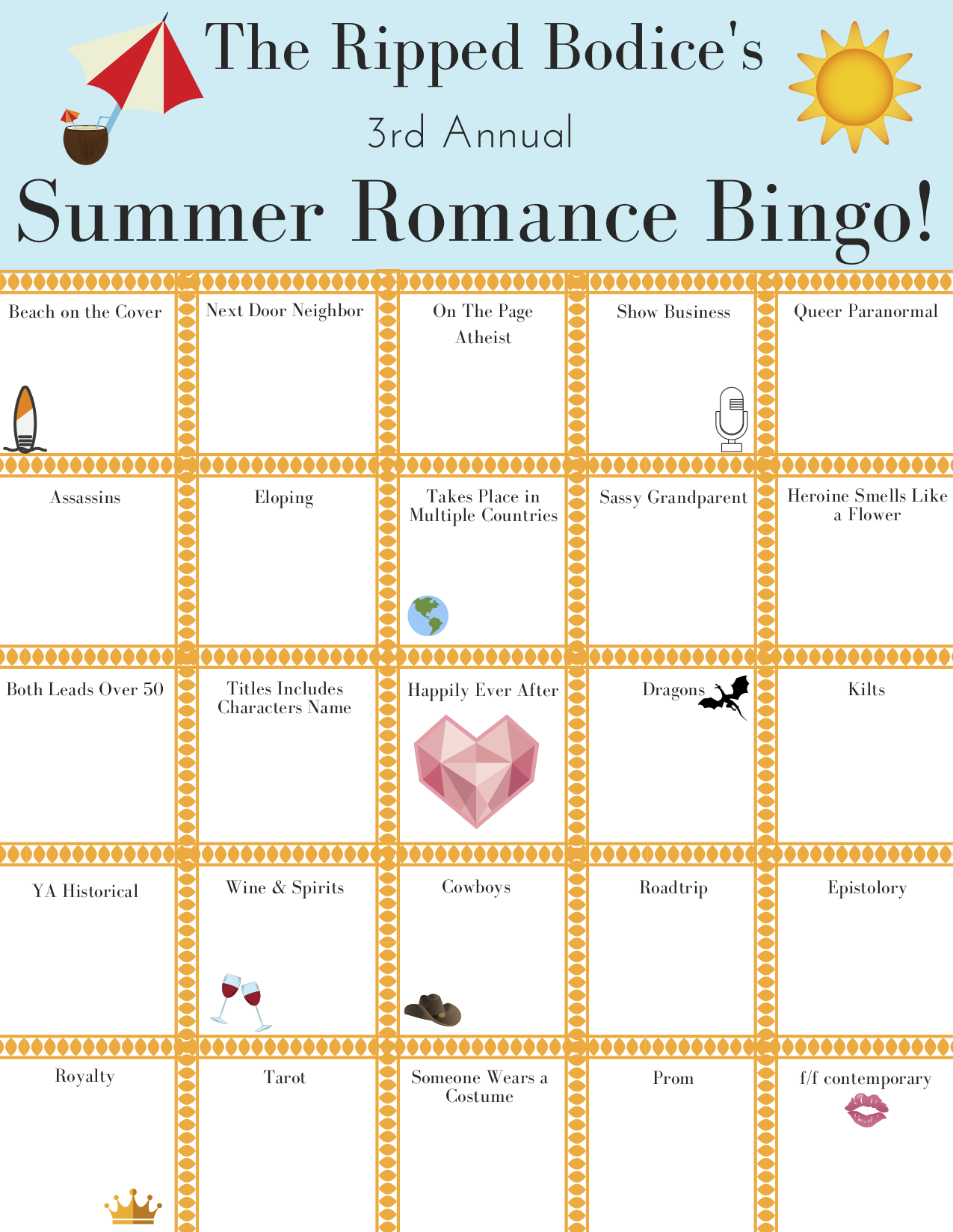 We’ll be playing along in our Goodreads group and helping one another out with recommendations. You can also follow The Ripped Bodice on Twitter for more recs. If you’re not on Goodreads, that’s okay! We’ll be giving some suggestions here and opening it up to the Bitchery for further help in the comments.

Not all of the square themes are listed below! Here are the ones we skipped, so if you have suggestions, leave them below:

For the recs, we’re pulling from books that have been mentioned here on SBTB, are well-known, or have been recommended to us!

We had a great guest review of Feud by Phyllis Bourne ( A )!

Sleepover by Serena Bell ( A | BN | K | G | AB ) received an A grade from Elyse, and has an emotionally fluent hero.

Our database also contains the Neighbor trope with over forty books to browse!

Show business could mean a lot of things, but we do have a tag for Actors/Actresses! We have another for Rockstars/Musicians.

Lucy Parker has a whole dang series for this!

Elyse liked Heartstrings by Belinda Williams ( A | BN | K | G | AB ), which is a holiday romance novella with a British actor hero.

And I do think some of K.J. Charles‘ books might qualify. Which would you suggest?

We do have a Spy/Assassin character archetype in our database, but I do think there’s a difference between the two. Be sure to check for context!

More Than Words by Mia Sheridan ( A | BN | K | G | AB ) starts in the U.S. where the hero and heroine are kids, and then takes place in present-day France.

Want something more bonkers? The Professional by Kresley Cole ( A | BN | K | G | AB ) begins in Nebraska, has some cornfield finger-banging, and then is set in Russia.

For the Duke’s Eyes Only by Lenora Bell ( A | BN | K | G | AB ) has an Indiana Jones-esque plot and has some traveling to other countries.

You might be able to find something in this Rec League of Eccentric Older Women!

We don’t have any specific recommendations for this one, but we have a Rec League for Gardening Romances. And, if a heroine is a gardener, I bet there’s at least one mention of her smelling like flowers.

We have some great suggestions for this one!

Mrs. Martin’s Incomparable Adventure by Courtney Milan ( A | BN | K | G | AB ) is a historical lesbian romance. Check out the guest review for this one!

Carrie liked Bingo Love by Tee Franklin ( A | BN ), which is a graphic novel and features a romance between two Black women in their 60s!

Mrs. Martin’s Incomparable Adventure by Courtney Milan would also work here, but remember, you can only use each book once!

Rafe by Rebekah Weatherspoon ( A | BN | K | AB ) is a contemporary romance with a nanny hero. Carrie gave this one a B+!

I believe any books in Sandhya Menon’s Dimple and Rishi series would work! The first book is When Dimple Met Rishi ( A | BN | K | G | AB ).

We have a tag for that!

You can’t go wrong with romances by Thea Harrison, G.A. Aiken, or Donna Grant. You may have even bought one their books because they’re on sale frequently.

Sarah and I both read Highland Dragon Warrior by Isabel Cooper ( A | BN | K | G | AB ), but be warned that it’s light on actual dragon-ing.

Getting Hot with the Scot by Melonie Johnson ( A | BN | K | G | AB ) has a contemporary kilt-wearing hero.

We also have nearly 90 books tagged as Highlander/Scot in our database.

My Lady Jane by Cythina Hand, Brodi Ashton, and Jodi Meadows ( A | BN | K | G | AB ) is YA historical with a fantasy twist. The other books in this series also work!

Bartender characters are also part of our Chef/Foodie/Bartender tag.

May I direct you to our Cowboy archetype in our database?

If you read the recent guest review of Desire Lines by Elizabeth Kingston ( A | BN | K | AB ) and picked it up, that fits!

I don’t want to say When a Scot Ties the Knot by Tessa Dare ( A | BN | K | G | AB ) is the best romance with epistolary elements out there, but it’s pretty close.

We have a tag for that!

We’ve shelved over 150 books that feature royalty in our book database. That’s a heck of a lot.

Alyssa Cole’s Reluctant Royals series is an obvious choice. The first book is A Princess in Theory ( A | BN | K | G | AB ).

Her Royal Highness by Rachel Hawkins ( A | BN | K | G | AB ) just released and is a YA lesbian royal romance.

For something a bit different, A Queen from the North by Erin McRae and Racheline Maltese ( A | BN | K | G | AB ) is a royal romance with alternate history.

Someone Wears a Costume

I know of two off the top of my head!

Dating You/Hating You by Christina Lauren has a scene where the heroine is dressed up as Hermione.

In Chase Me by Tessa Bailey ( A | BN | K | G | AB | Scribd ), the hero and heroine first meet when the heroine delivers a singing telegram in a bunny costume.

Have you seen Tara Scott’s guest reviews? She has you covered!

Will you be playing this summer? If you’ve played before, welcome back! Any Bitchery suggestions for the bingo categories would be so welcome!