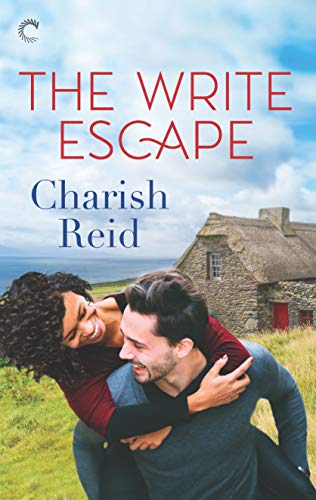 Theme: Fish Out of Water

The Write Escape is a delicious vacation romance with a heroine who runs away to Ireland as her life is falling apart. This had everything I need from a travel story:

Evocatively described location? Check.
Handsome local who charms you off your feet? Check.
A heroine in need of a fresh start? Yep.
Entertaining characters who subvert cultural stereotypes? Oh yeah.
Flirting using literary references? Did not know I needed this, but YES

Antonia is an editor at a Chicago publishing house that is too important to publish romances like the novel she secretly writes in her spare time. She has a boss who ignores her ideas and a wealthy fianceé, Derek, who thinks she should give up her writing “hobby” to be his housewife. Derek helpfully cheats on Antonia, allowing her to extract herself from a relationship that has trained her to be a doormat. She immediately cancels the wedding, and that same day her publisher dissolves, taking her job with it. Antonia is not having a good day, but these twin disasters inspire her to take a solo honeymoon to rural Ireland, use it as an opportunity to finish her book, and have a taste of adventure. Her arrival in Ireland is marred by the discovery that Derek has cancelled all her travel arrangements. After a series of mishaps, she meets Aiden on the way to a new vacation rental off the beaten path.

Aiden is a literature professor in Galway who’s lost faith in his teaching skills after an ex dumps him for his lack of ambition. Originally from a working class family, Aiden has a serious case of imposter syndrome, and is starting to burn out from his efforts to get his tenure bid back on track. He heads to western Ireland for some R&R and chats up a gorgeous American, Antonia, at a grocery store along the way. When they discover they’re both staying at neighboring guesthouses in the same tiny town, their initial attraction rapidly blooms into a summer romance.

This was a lighthearted story with just enough personal growth, and intervention from helpful family members, to keep things interesting. Aiden initially thinks Antonia is beautiful, and tries to flirt by prattling nonstop about James Baldwin in Paris—fully aware of how ridiculous he is being but unable to stop. At their second meeting, in a pub, it’s Antonia’s turn to be nervous and distracted by her attraction to him in an environment where he’s confidently at home. By the time he sweeps her into his arms to keep her from being crushed by a lolling drunk, I was swooning alongside her.

Primed for criticism by her snobbish boss and fiancé, Antonia is shocked at Aiden’s enthusiasm for her romance writing. He requests a book recommendation and falls hard for his first historical romance, peppering Antonia with plot questions and trying to read at every opportunity. Antonia uses their banter to flesh out her own novel, and heal from the betrayal of her ex. I liked that she’s the one smart enough to figure out Aiden’s abandonment issues (his father left the family when Aiden was young) and gets them to communicate about their future together. Seeing each other in moments of uncertainty and grief jumpstarts their intimacy; I found the quick pace of their love story completely believable.

Aiden is an excellent fantasy boyfriend. Perhaps I was influenced by the fact that I read this on a plane, but I was ready to fly to Ireland in a sundress and find my own Aiden. I messaged my friend mid-book, “I might be reading the best vacation romance ever,” from seat 26A. Part of what makes Aiden a soothing character is that, while he has plenty of stresses in his regular life, Aiden spends most of the book on his annual vacation, and infatuated with Antonia. Being in a place he associates with relaxation makes Aiden an easygoing foil for Antonia’s worries. She’s uncertain about her future, angry about her past choices, and trying to stop relying solely on her support system for career direction. There’s such tenderness in Aiden’s treatment of her, with murmured words of support, long looks, and deep listening while stroking her hand or cheek. He treats Antonia like she’s precious, but teases her enough about her struggles to adapt to Ireland (she can’t even figure out the washing machine) that it doesn’t feel like she’s in danger of falling off a pedestal. He also lets her deal with Derek’s drama herself. While he’s angry on her behalf, Aiden doesn’t make her ex-fiancé’s absurd behavior about himself. Their first fight was adorable. Antonia is angry with Aiden for reasons that are mostly her fault, but Aiden still apologizes to her. With oral sex. Then he apologizes with words about his wrongness; chocolate frosting is also involved. Men, take note: this is how you say you’re sorry.

Antonia and Aiden are underdogs in their respective fields, who find it easier to lift up each other’s talent than recognize their own. They both have scene-stealing, opinionated mamas who fought for their children to have opportunities they lacked. Antonia was initially intimidated to be traveling alone in an unfamiliar place, and I loved seeing her grow in confidence over the course of the story. Aiden struggles with seeing similarities between himself and his father, an aimless fisherman. I found this dynamic particularly well done and more nuanced than I expected. I love competent characters, and I was initially worried when Aiden seemed to be struggling at work. Antonia helps him see his issue is self-awareness, not mediocrity.

As a Black woman who has traveled in Ireland, Antonia’s experience being hypervisible as the only Black person in town, yet feeling at home with curious locals, felt very realistic to me. Aiden’s research focuses on parallels between Black American and Irish culture, including colonialism and migration. The Write Escape weaves these parallels into Aiden and Antonia’s conversations in a way that added depth to their relationship but never made them exotic or tokenized, which is a common pitfall of travel romances. Aiden is careful not to overstate historical alignment, at one point specifically smacking down the “Irish slave myth” in a way that made me want to stand up and cheer. I can’t emphasize enough how well done this was, and how many opportunities there were for it all to go terribly wrong. I was impressed with how the book wove literary and cultural comparisons into the story in an organic way so that Antonia and Aiden could fall for one another as individuals, not as representatives of their communities. At one point they have a conversation about Zora Neale Hurston that was basically literary nerd foreplay.

The Write Escape does a great job of building chemistry and describing the physicality of Antonia and Aiden’s initial reactions to each other. Unfortunately, the sex scenes used one too many euphemisms for my taste and felt occasionally awkward. To be fair, my taste is zero euphemisms. I found the climactic sex scene to be particularly unarousing, which was both disappointing, and a relief, as I was squeezed into an overwarm plane while reading it.

The Write Escape contains several short segments of Antonia’s romantic suspense novel about Americans in Thailand, and these were probably my least favorite parts of the book. It was hard to jump into another story (and place) for a few paragraphs at a time, and I was bored by the characters. I don’t think these sections were actually necessary for the book and I found myself skimming them. Antonia often leans on her badass heroine when she needs a confidence boost (e.g., what would my character do?). I think that dynamic could have been accomplished without the distraction of a book within a book.

I also found Derek to be a confusing and unrealistic villain. He vacillates between being disinterested in Antonia and raging at her to come back to him. His unfaithfulness and spite give Antonia a chance to stand up for herself, and eventually smack him down, but he had so many terrible traits that he never feels quite believable. Derek is more of a random collection of bad behaviors than a real person. In contrast, I appreciated that Aiden’s ex isn’t vilified for focusing on her career, or being critical of Aiden’s lack of focus on making tenure. While Aiden was initially crushed by the breakup, it’s clear to him why they didn’t work. He acknowledges that women in his field are under additional pressure, and held to different standards.

Despite my criticisms, The Write Escape made me feel like I was vacationing with Antonia and Aiden as they sensually explored the countryside: the smell of peat fire; the roughness of a nubby sweater; windy storms outside a warm cottage; the sounds of a small town pub where old men sing shanties. Their journey to become more confident versions of themselves was mostly satisfying, and involved surprisingly thoughtful discussions about American and Irish books and music. This was a great escapist read with a simplistic villain, but nuanced main characters.

Tl;dr It’s cute when African-American and Irish people get together and dig into cultural similarities.

The Write Escape by Charish Reid