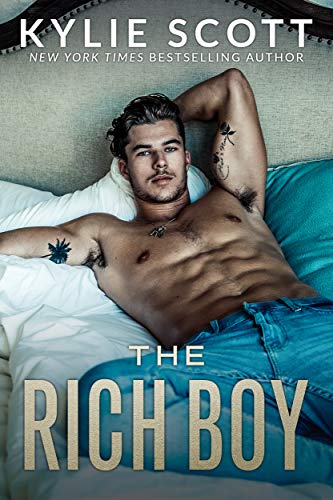 Unsurprisingly my anxiety is trending moderate to high right now, so I’ve been turning more and more to romance novels to quiet my mind. At any other time, I think I would have been a little more critical or at least skeptical of the depiction of wealth and class in Kylie Scott’s The Rich Boy, but today the idea of a Cinderella story is immensely appealing to me. Being with a super rich dude who can pay for everything is essentially one less thing to worry about (and a big thing at that). There is also a tremendously satisfying amount of grovel in this book, plus-sized fashion pr0n, and a hero who is willing to go to therapy.

Alice Lawrence is waitressing at a bar trying to figure out what to do with her English degree when she meets hot busboy Beck. Beck quotes Jane Austen, flirts with Alice, and defends her from a lecherous customer. Each night after closing they spend quiet moments together, and it’s apparent that they are working from some serious insta-lust to something more.

Then one day a man in a suit comes to collect Beck. It turns out Beck’s an Elliot, and the billionaire scion to a real estate empire. Beck had a falling out with his remarkably shitty family, particularly his father, and took off to make his own way in the world even if that meant working as a busboy and living in a hostel. Beck’s father died suddenly and now Beck is being called home to collect his inheritance. That means dealing with his snide, unkind grandmother, his stepmother who is already looking for her next husband, and his three siblings, who make glaciers look warm and fuzzy. Beck’s father raised his children to be competitive and profit-hungry rather than supportive and loving.

Alice is understandably a little shocked that the guy she was falling for is actually a billionaire. Beck doesn’t want to lose what they have together and asks her to come with him while he sorts out his affairs. Alice agrees.

A lot of this book is Alice being swept into Beck’s fancy world. It’s clear his family doesn’t approve of her, and they are cool to her at best. I would describe this book as Knives Out except there wasn’t a murder and Ransom isn’t a shitbag. It’s a lot of rich people family drama, and Beck wants nothing to do with it. In fact he seems to cling to Alice as his means of staying sane and grounded through the entire ordeal.

There is very little internal conflict in this book until the very end and even then Beck performs some epic groveling. Most of the conflict is just Beck and Alice falling in love while his shitty family disapproves. Even when they’re being cruel to her, Alice stands up for herself. She’s not impressed by them and she never crumples in the face of their criticism. In some Cinderella stories, the heroine feels somehow unworthy of the hero’s world, but that’s never the case in this book.

When Beck does screw up, he acknowledges it, and actually puts in the work to fix it. He even starts going to therapy and I absolutely loved that. Beck has trauma related to growing up with emotionally distant parents and that he needs to actually work on himself so that trauma doesn’t inform all his future relationships. Depicting a character willing to go to a therapist to work on his shit was huge for me.

As a side bonus there’s also a lot of fashion pr0n in this book. Alice is plus sized (although again, that’s never some hang up for her–it’s simply a matter of fact) and as Beck buys her new clothes, she drops the names of designers and specific outfits so the reader can Google and drool. An example would be this Oscar de la Renta black midi dress. The novel also has Scott’s signature irreverent and witty banter. Beck and Alice are legitimately funny and the dialogue is a pleasure to read.

On any other day I would have said that there needed to be more internal conflict between Beck and Alice for this book to really work. Given the state of my brain, I was more than happy to indulge in Beck’s lavish world vicariously through Alice and cheer for them to break free of his toxic family and find their happily ever after.

The Rich Boy by Kylie Scott