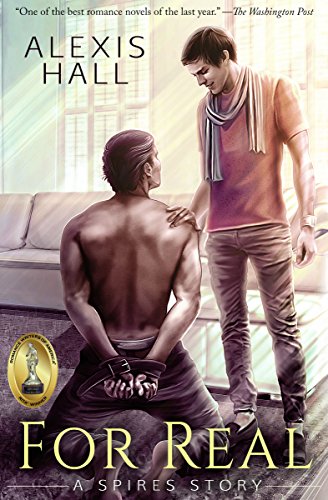 The problem is, while Laurie will surrender his body, he won’t surrender his heart. Because Toby is too young, too intense, too easy to hurt. And what they have—no matter how right it feels—can’t last. It can’t mean anything.

It can’t be real.

Oh man, this was so good. I first read it a while ago, and my plan was to just skim it again to write this review…and whoops, there went two days of my life under the spell of this book (again).

For Real has all of the same qualities that made me love Glitterland. The writing is so relaxed and natural that you can’t help but be pulled right into the story (and it’s hard to get back out, as the disappearance of half of my holiday weekend can attest). I like that it’s not just about falling in love. It’s about falling in love and then building and negotiating a relationship—the hard part. It’s sometimes hilarious, sometimes profound. It’s a long, complex, character-driven story.

The characterization is masterful, in fact, and I think that owes a lot to the narration, which is first-person POV, alternating between the two main characters, Laurie and Toby. This means you get to see not only how they interpret their own motivations, but also how their behavior comes across to each other, and, of course, the two don’t always match up. It’s an incredibly realistic and relatable exploration of a new relationship.

So, about the characters—Toby is a 19-year-old café worker who is absolutely certain about the kind of relationship he wants, although self-conscious about all the factors that make him an unlikely dom: “It’s like… you’re not allowed to be a dom until you’re forty and six feet tall and own your bespoke bondage dungeon. But I’m probably not going to get any taller, and forty is forever away, so what the hell am I supposed to do now?”

Laurie is a 37-year-old trauma physician still floundering after a bad breakup and unable to believe he will ever again find the kind of relationship he needs. He certainly doesn’t believe he’ll find it in a 19-year-old, but Toby is quick to set him straight: “Do you think because I’m poor and little and nineteen, I don’t know what I want?…Do you think if I felt abused or exploited or taken advantage of, I’d be with you? Do you think I can’t tell the difference? Do you think I don’t know what love feels like?”

(By the way, this reminds me so much of the Jane Eyre speech—“Do you think, because I am poor, obscure, plan and little, I am soulless and heartless?”—and I think it’s intentional. There are so many fun nods to classic literature sprinkled throughout the story, which is just the cherry on top of how great this book is.)

Contrasts are a big theme in this book—youth and maturity, power and vulnerability, giving and withholding, pleasure and pain, fear and conviction…sigh, it’s just so great. Smart and complex.

Like I said, this is a character-driven story. Laurie and Toby meet at a club, go home together, and find that they have really explosive sexual chemistry, as well as a sweet and bashful emotional connection that grows into something more. And the rest of the story is them figuring out how to be together—Laurie learning to give more of himself, Toby learning to be more comfortable in his own skin. If I made that sound boring, trust me, it’s not. (Plus, I feel I would be remiss not to mention, there is lots of creative sex that explores and advances their relationship dynamic and is also just plain steamy.)

For Real is a book about two people learning to understand themselves and trust each other. It’s absorbing, charming, and full of hope. Hats off to Alexis Hall—his books have set a very high bar.

For Real by Alexis Hall