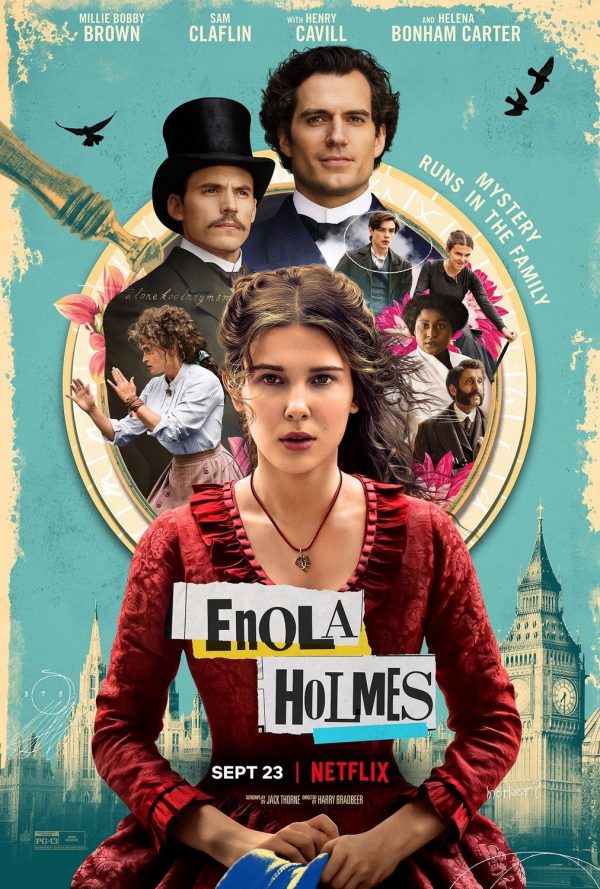 The new Netflix movie Enola Holmes has Sherlock Holmes, Millie Bobby Brown from Stranger Things, and suffragists, so it is relevant to our interests (Victoriana, feminism, actors who have been in geeky things). What follows is a joint running commentary and review by Tara and CarrieS, with additional input from Linden (age 16).

The plot is that Enola Holmes, younger sister of Sherlock (Henry Cavill) and Mycroft Holmes (Sam Clafin, hiding his beauty behind a terrible mustache), is raised by her mother (Helena Bonham Carter). When her mother disappears, Enola runs off to find her, which results in her becoming involved in the affairs of another runway, the young Viscount of Tewksbury. Now she has to solve two mysteries. The first is where has her mother gone, and why her mother left. The second is who is trying to kill the Viscount, and why?

Enola’s efforts cause her to encounter a jiu-jitsu teacher, the strict headmistress of a boarding school (Fiona Shaw), and a terrifying assassin (Burn Gorman). She also has several run-ins with her brothers. She is legally Mycroft’s ward, and he is completely unsympathetic to her and obsessed with making her a proper young lady. Sherlock is more sympathetic and pops up now and then to offer some wan encouragement and sympathy but not much actual assistance. I’d have expected better from Sherlock, but here we are. Enola also has a bit of a crush on the Viscount, who has a major and obvious crush on her.

CarrieS: This is a wonderful cast, but with the exception of the effervescent Millie, they seem to be phoning it in. It’s refreshing to see a sixteen-year-old played by an actual sixteen-year-old. Henry Cavill is much too sensitive and not discerning enough to be Sherlock so I’m just going to pretend he’s someone else. Honestly, this is the least Sherlocky-Sherlock I’ve ever seen. So much angst! So little ability to detect! The Witcher must have really worn him out because he always looks like he just wants a hug and a nap.

Tara: It’s not easy killing that many monsters! Seriously though, did you read about the Conan Doyle estate’s copyright lawsuit regarding Enola Holmes? It’s all because Sherlock has feelings, which seems like a stretch.

Furrowed brow emotions up ahead

But he doesn’t DETECT much, dammit![/caption]

I’m neither here nor there on Henry Cavill or Sherlock Holmes’s feelings. He’s…fine. Not great, not awful. And while I agree with you about everyone in general phoning it in, I still like Helena Bonham Carter’s performance. Maybe it’s because she’s one of my favourite actors going, but she’s playing the eccentric, feminist mother beautifully and I can see how she was able to mold Enola into the firecracker that we see.

Thank goodness for Millie Bobby Brown, because she is hands down, the best part of this movie. She’s acting her ass off! If she’s this good now, I can’t imagine what she’s going to be like in movies to come. Because I only watched part of the trailer, I’m a little surprised to realize that this is truly her movie. I thought it was going to be Enola solving crimes with Sherlock and that was not the case at all.

CarrieS: I dislike Enola talking to the camera but I do like that it lets us jump into the story. If you have to do a lot of info dumps you might as well be up front about it and get them out of the way.

Tara: I found it a bit annoying too, but then my husband looked it up and saw that the guy who directed Enola Holmes also directed most of Fleabag, so it’s making more sense to me. I like some of the other visual effects done with newspaper cutouts and sketches while she’s talking, however. Actually, I like the visuals in general. This movie is beautifully shot and I want to go hang around in the English countryside.

Linden is enthralled. “We know he’s the love interest,” she points out, “Because he pops out of a bag, and that’s the romantic equivalent of the stork delivering a baby.” She says he looks like a pixie. I am grateful for her expertise on romantic attraction since he is literally young enough to be my son and it would be skeevy for me to comment. We both approve highly of his skills in botany. “Very cottagecore,” says Linden. We are both VERY upset that Enola is cutting his hair. Stay away from the hair, Enola. With his aristocrat hair he looks like Anthony from Sweeney Todd, and we LOVE Anthony at our house!

Tara: Okay, fair about his hair being very pretty (although yes, I could also be his mother, so ew). But! Enola was smart to cut his hair because a Very Bad Man is chasing him and trying to kill him! He definitely needs a change of disguise to go with the haircut, but it’s at least a start! I also love that her attitude with him is “I don’t care if you ARE a Viscount, because I think you’re a nincompoop. Stop wiggling while I cut all this hair.”

“Oh my gawd! He lives in a treehouse in the woods!” Linden is ded.

The subsequent revelation that he is in hiding in London as a florist has slayed her completely (this, I’m informed, is a big cottagecore thing and also a fan fiction thing).

Tara: What is a big cottagecore? I feel like I’m 95 now and need to go have dinner at 4:30 pm. I thought the treehouse was incredibly twee and questioned the idea of keeping that many books in a structure that isn’t watertight in England where it rains all the time. But I guess if he’s rich he can just buy more books for pressing flowers.

CarrieS: Apparently the online world, especially Tumbler, is very interested in “aesthetics” and “Cottagecore” is one of these aesthetics. It’s a look and a vibe based on a highly idealized version of living in a nice cottage in the woods. The magic of cottagecore allows one single person to build a complex treehouse and preserves the books within. Also it keeps you from getting dirty and there are no bugs.

Love interest jumps outside and Linden and I picture him standing outside singing the song from Sweeney Todd…”I feel you, Enolaaaaa…” We are having way too much fun. More fun than is actually warranted by the movie.

Tara: Good for Enola, saving the day yet again. I love how competent she is.

I have one massive gripe with this movie

Mycroft is an insufferable asshole to Enola, who is his ward after their mother takes off. He’s so condescending every time he talks about her or to her, and I wanted his face to get smashed along with the patriarchy that he’s so invested in reinforcing. Their bad power dynamic is so forceful that I was positive Mycroft would get some kind of comeuppance, even if it’s just Enola telling him in her own way to go eff himself. That NEVER happens and it’s such a massive letdown. The world is shitty and hard, so it was not enjoyable to see a smug adult man take pride in grinding down a teenage girl that’s in his care.

Wait, why are there so many endings to this movie? It’s reminding me of LOTR: The Return of the King. Are there credits to this thing?

CarrieS: We also kept thinking the movie was over when it wasn’t. At one point I realized I had completely forgotten about the mom and I’m not entirely sure what happened with her other than the hugging.

In the middle of the movie a woman gives Sherlock a huge truth bomb, a bit of reality that stuck out in a movie that is purely a fantasy version of Victorian England (so clean!). Sherlock faces off with a Black woman who runs a tea shop and teaches suffragists jiu-jitsu (a real thing that happened, BTW):

Edith: You haven’t any hope of understanding any of this. You do know that? Because you don’t know what it is to be without power. Politics doesn’t interest you. Why?

Edith: Because you have no interest in changing a world that suits you so well.

Edith: A scary one. And you’re intelligent enough to know that every word of it is true.

Linden: This whole movie gives me vibes like if Charlotte Bronte and Roald Dahl wrote a fanfic together when they were twelve. It’s a very pretty movie, with some nice cinematography and good set design. B.

CarrieS: Mildly amusing fun for the whole family, appropriate for all ages with the exception of a couple of violent bits. The romance is sweet but tepid and unnecessary. The plot doesn’t make sense and the Sherlock aspect is disappointing, but the movie has a lot of charm thanks to Millie and to a lovely, if highly inaccurate, look (so clean!). I liked the inclusion of people of color. If you don’t want your kids to see violence skip any parts with Burn Gorman in them. I’d say this is aimed at a younger (10 – 16?) audience but younger kids will be fine except for the Burn Gorman parts (seriously, he’s terrifying) and adults will be mildly entertained. C-

Tara: I watched this movie with my husband and another friend (Netflix Party + putting my friend on speaker phone = social distancing movie night). As soon as the credits rolled, my friend and I both said at the same time, “Well, that was a movie.” And that’s the most succinct way I can put my feelings about Enola Holmes.

I agree with both Linden and CarrieS that it’s very pretty and charming, but it has some serious problems. Not only is the plotting off, but the pacing never worked for me either and I never could get a sense of where we were at in the story arc. I didn’t hate it, but I can’t recommend it and if a sequel comes out, I’ll likely skip it. C-