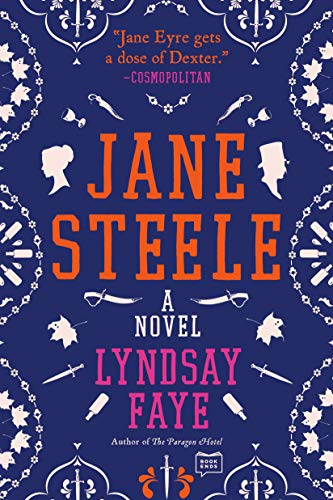 As an ardent fan of Jane Eyre, I have read many literary adaptations of her story. I’ve read about a vampire slayer Janes (Jane Slayre) and Jane in space (Jenna Starborn) and Jane in the 1950s (The Flight of Gemma Hardy) and many more, and I’m usually disappointed. Jane Steele, however, was just about the most viciously satisfying thing in the history of ever. NB: book titles in this review are italicized while names are not.

Jane Steele is not a direct retelling of Jane Eyre. It’s the story of a Victorian woman, Jane Steele, who reads Jane Eyre and is inspired to write her own autobiography. Their lives are not exactly the same but they share many parallels – both wind up as orphans with cruel aunts, both attended wretched boarding schools, and both work as governesses for brooding, mysterious men with whom they fall madly in love. Unlike Jane Eyre, however, Jane Steele has just as many secrets as her employer does, including but not limited to the fact that Jane Steele has killed several people.

I am desperate not to reveal spoilers in this review, which is simply torture, for I long to spill EVERYTHING, especially a speech on page 326 that had me IN TEARS. Suffice to say that if Jane Steele is a bad person, then so am I, because every time she killed someone I cheered and did a happy dance. Seldom have I been so thoroughly thrilled and delighted by murder. Readers should be advised that the book does include description of and discussion about sexual and physical abuse, especially in the first section of the book.

In the original Jane Eyre, the first third of the book, which tells of Jane’s childhood, is not super exciting despite the fact that includes a haunting, rampant child abuse, and the rapid accumulation of young corpses at Jane’s horrible boarding school. The story doesn’t pick up until Jane goes to Thornfield (as an adult) and meets Mr. Rochester. Jane Steele was somewhat the inverse of that. I found the first part of the book (conveniently labelled “Volume One”) to be the most engrossing, although the rest of the book was also fantastic. Young Jane Eyre is scolded constantly for being wild and savage, and young Jane Steele is better at hiding her wildness than Jane Eyre, but also much better at cultivating it – she uses her childhood experiences and her young adult years to learn to lie, steal, sneak, and, on occasion, murder.

Jane Steele is not a sociopath – she is capable of feeling great love and empathy, although she is very bad at expressing it because she finds herself unworthy and thinks that her sexual feelings are shameful (she is bisexual). But Jane Steele is ruthless and pragmatic. She is capable of acting in a deadly manner both instinctively in moments of great peril and deliberately when she believes that offing someone will protect others.

Once Jane Eyre gets to Thornfield Hall, she has learned to confine her defiant speeches to the page (for the most part) and to keep to her own business while she tries her very hardest to appear demure and proper. Similarly, Jane Steele appears to be, if not proper, then at least not actively criminal while in the employ of Charles Thornfield, her brooding and handsome employer. I found this frustrating, as I liked my Jane Steele in all her criminal glory, but again it helped highlight a theme of the original Jane Eyre – both governesses are in disguise (Jane Eyre is disguising her true thoughts and feelings, and Jane Steele is disguising her very identity).

Jane Steele proves to be a much more affectionate and loving governess than Jane Eyre, and lacks Jane Eyre’s xenophobia. Her charge, and most of the people in the house, are Sikhs from India, who have arrived at the estate along with Sir Charles Thornfield. Charles, who fought in the Anglo-Sikh Wars that raged in the 1840s, grew up in India and is deeply attached to his Indian companions. While much of Charles’ story is melodramatic and outlandish (as fits a gothic romance), the presence of so many Indians in the house is completely historically plausible and gives a much-welcomed note of accurate inclusion to counter the racism in the original Jane Eyre.

Jane Steele finds herself in the middle of multiple mysteries. Can she reclaim her inheritance? Why isn’t she allowed to go into the cellar? Why won’t Charles take off his gloves? Why doesn’t the child she is hired to care for remember her past? What’s the deal with missing jewels and also with a creepy dude who shows up at the estate? Jane Steele points out that while she is fond of the character Jane Eyre, said character is a rotten detective. Jane Steele is not.

My measure for whether an adaptation succeeds or fails has nothing to do with the fidelity of the adaptation to the setting or other details of the original. Heck, one of my favorite adaptations of Pride and Prejudice is The Lizzie Bennet Diaries, which involves a modern-day graduate student and her vlog. I care about whether the adaptation succeeds in highlighting the themes of the original work, and Jane Steele does a marvelous job with this. Like Jane Eyre, Jane Steele feels herself to be sinful, unworthy, and unlovable. Yet, like Jane Eyre, Jane Steele believes that her life has value, and she fights to keep it from being wasted . The triumph of the story in Jane Eyre is not that Jane Eyre finds true love – it’s that Jane Eyre finds true love on her terms. The triumph of Jane Steele is that Jane Steele finds the ability to forgive herself and love herself, which makes it possible for her to accept love from others. It’s not a direct parallel to Jane Eyre, yet clearly Jane Steele sees in Jane Eyre a model of how to hold oneself as worthy when the rest of the world claims that you are not.

This book is bloodthirsty and exciting. It’s hard-boiled and tender. It’s funny and full of gothic melodrama. I enjoyed every bit of it. Above all, I loved that Jane Steele, who in most ways resembles me not a whit, shares with me a deep affection for Jane Eyre and a sense that Jane Eyre inspires us to value our own lives and our own stories. I’m giving this book an A- instead of an A+ only because once Jane meets Charles the story gets full of perhaps a bit too much melodrama for its own good.