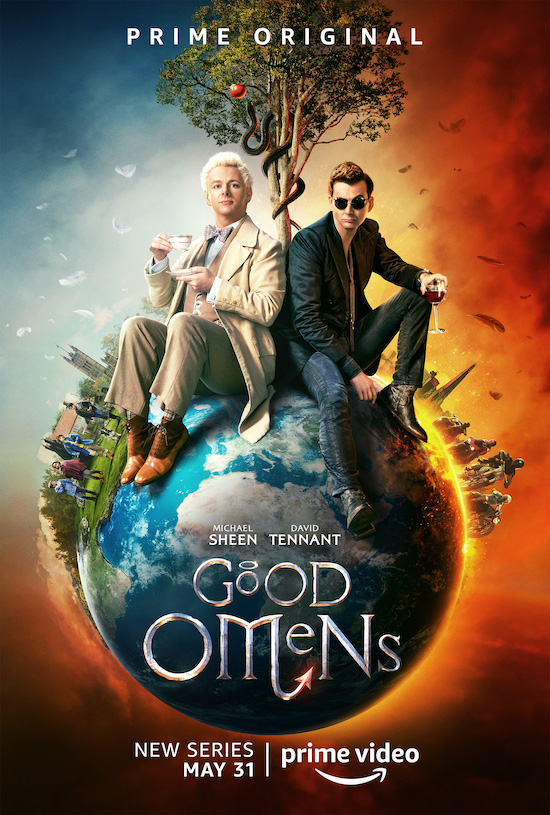 This guest review comes from Rhoda Baxter! Rhoda writes contemporary romantic comedies about smart women and nice guy heroes. She also writes multicultural women’s fiction as Jeevani Charika. Her latest Christmas novella is Christmas for Commitmentphobes. Rhoda can be found on her website or on Twitter (@rhodabaxter).

Good Omens is being shown on TV in the UK. It’s been available on Amazon Prime for months and on DVD since November. I know it’s not everyone’s cup of tea, but I’m mildly obsessed with it.

I first read Good Omens when it came out in paperback all the way back in the 90s. I had never heard of Neil Gaiman, but I loved Terry Pratchett. It’s one of the few books that I’ve re-read many times because it makes me laugh every time. As a fan, I was wary when they said it was going to be adapted for TV … but then less wary when I heard that Neil Gaiman would be writing the adaptation. Now, having seen it, I think that maybe the adaptation is even better than the book.

For those who don’t know it, Good Omens is the story of an angel (Aziraphale) and a demon (Crowley) who have been on earth doing good/bad deeds for six thousand years. Despite having to work against each other, they’ve been the only two celestial beings in the area for so long that they’ve become friends. They’ve become quite fond of the world and the humans too, so when Armageddon finally kicks off, they don’t want the world to end. But it’s all part of the Great Plan and God’s plans are always Ineffable.

As angel and demon conspire to prevent the end of the world, they have to keep their respective bosses – the archangel Gabriel (played by John Hamm) and the demon Beelzabub (played by Anna Maxwell-Martin) – happy. The bosses are portrayed as that middle manager that used to annoy you at work. You know the one.

Of the subplots, the least convincing was the romance between the young witchfinder private Newt Pulsifer and the equally young witch, Anathema Device. They just didn’t have the chemistry that two leads had. But the four kids who play the Them are perfectly cast in their roles.

The special effects are impressive, but it’s also worth noting the music. There’s quite a lot of Queen – any CD left in Crowley’s car for any length of time eventually turns into Bohemian Rhapsody. At the end of each episode, the credits are played out to the theme tune in different styles.

Both the book and the TV show are very British. There are a lot of quaint villages and apple trees and red phone boxes. London is almost as much a character as it is a setting. There are monsters (demons, a hellhound, a devil), but nothing too horrifying. There’s fantasy violence, but not much gore. There is, however, coarse language. Being British, there are plenty of ‘bloody’s’ liberally sprinkled about and a couple of F bombs (both very funny in context).

The casting is remarkable. I adore David Tennant anyway and I’d watch him in just about anything, but Micheal Sheen was a revelation. The pair are evenly matched and have great chemistry on screen. Daivd Tennant is a loose hipped, louche Crowley and Micheal Sheen is an uptight, fussy Aziraphale and they are adorable together. Miranda Richardson plays Madame Tracy, medium and part time sex worker. I’m always in awe when actors play each other and her turn as Madame Tracy possessed by Aziraphale was amazing.

The adaptation remains faithful to the book for the most part. What raises it above the book is that Gaiman has added a romance subplot into the relationship between angel and demon. Episode three starts with a long opening sequence that tracks their relationship over 6000 years and it’s a mini romance told in fifteen minutes. When Aziraphale says “You go too fast for me, Crowley”, I squealed out loud (much to the surprise of my husband – not a romance reader). Since they are not human and the book is very clear on the fact that angels and demons are sexless, it’s a slow burn, but the tension is wonderful.

There is an epilogue in the TV show that isn’t in the book, which sets up a second series. Neil Gaiman is involved again, and the same actors, so I’m looking forward to that.

Until then, I’ll have to be content with browsing Etsy for Ineffable Husbands fan art.

What about you? Have you watched Good Omens? Are you obsessed, too?