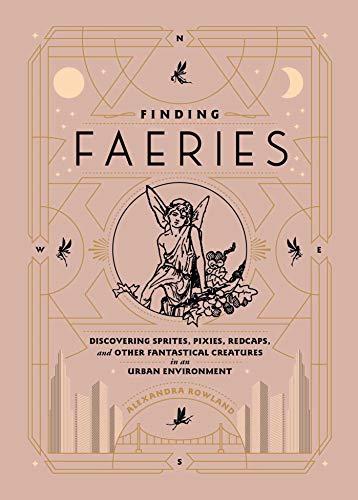 Finding Faeries: Discovering Sprites, Pixies, Redcaps and Other Fantastical Creatures in an Urban Environment purports to be a scholarly reference work on liminal creatures. Part encyclopedia, part practical guide, this book introduces us to more than fifty species of fae, both the well known and the lesser known. The text is adorned with detailed pen and ink illustrations by Miles Äijälä, which are a little reminiscent of antique scientific illustrations of animals. These are very beautiful, and really add to the feel of the book as a work of scientific reference.

While the creatures described in this guide are… I hesitate to say fictional, because offending faeries is never a good idea, so perhaps I shall simply say not recognised by conventional scientific or anthropological studies… the guide reads very much like some of the better popular science books I’ve read. It is precise, but friendly – the reader is assumed to be intelligent and interested but lacking in knowledge in this field, and so this guide provides clear, practical and often entertaining information about the liminal creatures it describes.

It also, to my great glee, takes a very modern scholarly perspective on these creatures. On the very first page of the introduction, the author addresses the impact that human behaviour and technology have had on faeries (or ‘liminal creatures’, which is the text’s preferred term):

The changes in the rhythm and arrangement of human life have not been the only factor impacting the supernatural ecology—beings that were once extraordinarily rare have found niches in which to thrive in abundance, while formerly commonplace native species have been driven out by urban sprawl, technological advancements, climate change, and especially by their invasive counterparts.

Indeed, the encyclopedia’s stated goal is to survey ‘the ways the activity of human civilization has influenced these creatures’. It’s a truly ecological study of how liminal species interact with their changing environment. We learn, for example, that the storm-bringing Psonen have thrived in the warming world, or that certain species of dryad are at risk of extinction due to deforestation, and there is also a chapter on the changes found in faeries in the area around Chernobyl and how these differ from those found in faeries impacted by radiation in other sites.

But of course, anthropogenic climate change isn’t the only way in which humans have altered the environment. Immigration – and all the implications of immigration, including forced immigration, slavery, and the genocide of First Nations people – in addition to their direct impact on the humans involved, also change the environment in which we live. And, this book argues, it also changes the liminal environment, as liminal creatures tend to travel with the humans to whom they are connected.

Finding Faeries focuses pretty tightly on the ecology of the liminal world, and so while it is clearly aware of – and disapproving of – the human tragedies and cruelties underlying this changed ecology, it hardly ever discusses them directly. In the afterword, Rowland talks about trying to balance not telling other people’s stories with not erasing them either, and concludes

… the thing that burned in the pit of my stomach through all of this was the painful awareness of the fact that for hundreds of years, white supremacists have used European mythology and folklore as a tool to excuse or justify their atrocities while systematically destroying or suppressing the mythologies (and languages, cultures, and lifestyles) of people around the world. When it came down to it, I really, really didn’t want racists to be able to like this book.

To me, it seemed that she achieved this balance, but as the descendant of European immigrants to Australia (and I could write a whole ESSAY on how our appalling treatment of First Australians has changed our ecology and, frankly, is a national shame), I am certainly not the best person to judge this.

The text is also extremely disapproving of the limitations, omissions, and frank racism of mainstream academia when it comes to studying liminal species native to America, or those linked to immigrant populations. The dismissal and erasure of the voices of Native experts is decried, and we are informed that this devaluing of the indigenous is reflected in the near extinction of many native species.

As someone who works in close proximity to academia, I found this both hilarious and depressing: it’s really a pitch-perfect parody of the discourse as I have seen it play out in less liminal fields. Academia is full of infuriating conversations about whyyyyyy do we need to have special grants that are only available to particular demographics, or to research teams that have a diverse mix of applicants, whyyyyyyy can’t we just give grants to the best people (who just happen to often be male, White, privileged, etc, what an astonishing coincidence!)? And you can go around in circles for days arguing about equity and access and social justice so forth, but in the end, the pragmatic argument that sometimes stops the whingeing tends to be: people with different backgrounds have different experiences and perspectives and will notice or focus on different things, and this is better for the research in the long run.

So I found it rather pleasing that, in the world of this ‘non-fiction’ work, the liminal world punishes this kind of prejudice pretty directly. Are all your researchers straight, white and male? Too bad if you want to research – or even see! – liminal species that are only visible to people of other genders or heritages…

Indeed, there are some species that are impossible for certain demographics to see even when they’re in the same room as them. For instance, consider the findings of the biologist Jean Blakeman, who in 1942 conclusively proved, first, that she had captured a banshee, and second, that her male colleagues found it impossible to gaze directly at the creature, notice it, or, even after having it pointed out directly, remember specifics of what it looked like. (Famously, the one “exception” to this pattern was L.M. Yarrow, Blakeman’s young undergraduate assistant, who came out as a trans woman fifty years later.)

Similarly, I loved this little nugget:

The actual human-perceived distinction between the Seelie and the Unseelie comes from our own biases and preconceptions. The Unseelie appear (to human judgment) wild and ragged, impoverished, and “uncivilised,” while the Seelie look like gracious, wealthy nobility, and that is more than enough to influence human behaviour. The Seelie are polite because we are polite to them, and the Unseelie are cruel because we are cruel first.

Another thing I really liked about this book was the mix of species represented, which included liminal beings from almost every continent (sadly, the exception to this was Australia… though given the book’s consciousness of problematic representation, I can see why our local species might have been deemed too hard), from the Mishipeshu of North America to the Tokoloshe of South Africa and the Akaname of Japan. There are, of course, the expected Brownies and Merrows and Redcaps of European origin, but it was nice to see an encyclopaedia that went beyond the mythologies I grew up with.

Also mixed in with traditional liminal beings were a number of less traditional ones that I am fairly certain were invented for this work, such as inksucker faeries, which feed on the words in books in such a way as to leave the printed word intact while rendering the word nonetheless incomprehensible to the reader. Ether sprites, which feed on natural gas and tend to haunt drilling sites and petrol stations, are another (though the author firmly recommends against allowing a tank of propane to gently leak as a sort of ‘birdfeeder’ to entice them). I liked the way they sat side by side with the Boggarts and the Loa and the Selkies, with their stories and scholarship and remedies listed as matter-of-factly as any of the others.

I was also delighted by the odd little smatterings of practical information scattered throughout, to aid the junior scholar or would-be faerie hunter. From information on (fictitious) grants and fellowships (women scholars of the liminal are encouraged to consider the Amy Hahn Fellowship), to how to unsubscribe if a faerie gets your email address (‘the most effective tactic is to ask several friends to spam your inbox with infinitely looping GIFs’), to tips on befriending the otherwise malevolent Tokoloshe (they are fond of sour milk), to the perils of letting cats and certain species of fae mix:

Cats can see liminal beings better than nearly any other mundane creature and are arguably semi-liminal beings themselves, but flower-faeries are small, fluttery things, and cats like to eat them.

I think every cat owner got a VERY vivid picture just then.

Finding Faeries: Discovering Sprites, Pixies, Redcaps and Other Fantastical Creatures in an Urban Environment is a very, very, clever book, and I had a lot of fun reading it. I love its humour and its sly digs at academia, but most of all I love that it’s one of those books that makes Faerie seem very real. Both the old and the new faeries whom you meet in this book feel like the ones you might see out of the corner of your eye in an urban environment, and the descriptions of the way they had adapted, or otherwise, to human technologies and behaviours felt very right.

Beyond that, I live in a country that has been shaped very much in the last couple of centuries by immigration and changes in how humans live on the land, and so conversations about invasive species and the effects of colonisation and how we grow food are never far away from any discussion of the environment and ecology. The essays in this book felt like they would fit right in with such conversations.

If you enjoy mythology and fairy tales, but would like them with a bit more of a side of postcolonial and environmental awareness, I think you will enjoy this book very much.