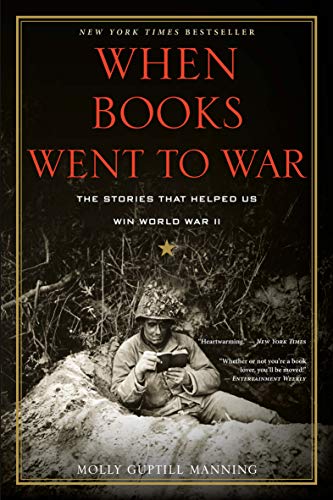 When Books Went to War

When Books Went To War, by Molly Guptill Manning, is a delightful non-fiction sure to delight the heart of any bibliophile and/or history nerd. The book is fairly short for non-fiction (the paperback is just under 200 pages not counting appendixes), and easy to read (it avoids jargon). It’s fascinating and heartwarming and informative. I loved this book and would suggest it for any avid reader.

When America joined WWII, the troops had many problems, one of which was crushing boredom. They desperately needed entertainment that was portable and did not require electricity. They needed books. Meanwhile, the USA realized that since the Nazis were staging massive book burnings, the Allies could motivate civilians and troops alike to support the war by contrasting the American’s free press and book distribution to troops with Hitler’s repression of books. President Roosevelt and others framed the war as “a war of ideas.”

With this in mind, the first push to get books into the hands of soldiers involved a massive donation drive. Manning chronicles how the Victory Book Campaign gathered over 10 million donated books for troops in America and serving abroad.

While this was an astonishing achievement, it turned out that lugging hardback books all over Europe and the Pacific was not easy for soldiers. A new partnership between the War Department and the publishing industry created millions of Armed Services Editions – paperback books that were literally sized to fit in uniform pockets. These books were unabridged and ran the gamut of best sellers to textbooks, turning a generation into avid readers.

It’s difficult to write about this book without simply quoting vast amounts of it, because there are so many passages that I loved. Here’s a letter from a colonel in europe:

…not long ago I was down inspecting one of my batteries in a pretty tough position and was in a gun pit when some Germans started firing in on us with 88’s. It wasn’t very pleasant waiting for them to come on in after their whistle first sounded and waiting for them to burst (elsewhere – you hope). Anyway, I noticed one GI reading between bursts. I asked him what he was reading and he told us “A Tree Grows in Brooklyn.” He started to read us a portion about “giving baby the gussie” – a part of the book – and we laughed like hell between bursts.

In another letter, a private described how reading allowed him to mentally escape from a terrible position. He had just grabbed a copy of Queen Victoria by Lytton Strachey when his unit was called to attack. He found himself wounded and trapped in a ditch under heavy shelling, and eventually “resigned to being completely at the mercy of chance” and read Queen Victoria until he was rescued and taken to a hospital, where he finished the book.

With letters and reports and text, Manning describes how books were chosen (in the end, it seemed that variety was the key to success) then produced and distributed. Initially there were mistakes in printing that caused mixed up or missing pages. Once that was resolved, the only complaints about ASE’s was that there weren’t enough of them. When ASE’s were distributed, soldiers considered it their responsibility to read whatever book they were lucky enough to get quickly and then “pass it along down the line.” Back in the US, there were concerns that the books would fall apart quickly, but servicemen treasured them in any condition. In the words of one sailor, “To heave one in the garbage can is tantamount to striking your grandmother.”

When Books Went to War is a great example of my catnip done impeccably: a detailed but readable and entertaining look at a small, previously overlooked Interesting Thing. It’s full of quotes from publishers, librarians, soldiers, and authors. It is exciting, vivid, tragic, and uplifting. It’s also an example of a time when something was actually done well – there were very few complaints about the Armed Services Editions, which appears to have been a successful, inexpensive, and beloved program. It also contains the thrill of victory over censorship, which delighted servicemen who wanted to read the often-banned book Forever Amber by Kathleen Winsor. Finally, the book is a testament to the power of literature and the power of offering comfort in small things – literally small, as each book had to fit in a uniform pocket.

This book gave me a different way to think about some of my favorite stories, including the popular A Tree Grows in Brooklyn (speaking of heartwarming, the author, Betty Smith, received about 1500 letters a year from servicemen, and she always wrote back). And it pointed me to some new reading. Yes, I did check out Forever Amber, that banned book that was in high demand, and although it’s dated and problematic I can see why someone needing to escape being simultaneously stressed and bored (and sexually frustrated) would want to read it.

The book closes with a description of how books were supplied to post-war Europe, as well as a discussion of how Armed Services Editions led to a paperback boom in the post-war USA and the impact that all these books had on the actual and perceived culture of America. I highly recommend this fascinating book, whether it fits in your pocket or not.

When Books Went to War by Molly Giptill Manning