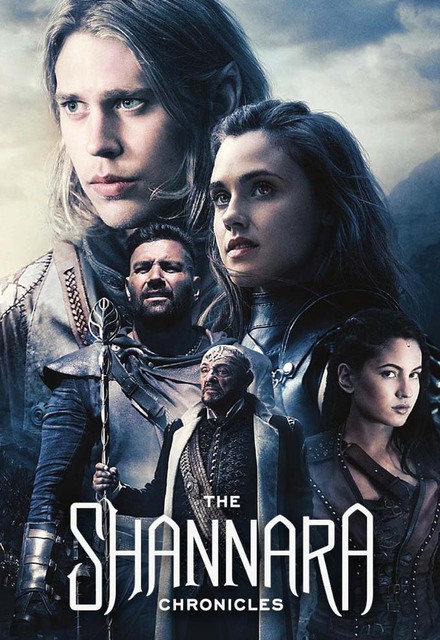 The Shannara Chronicles is bound to be a “love it or hate it” show. Based on the book series by Terry Brooks, it’s basically Lord of the Rings, the MTV edition. Three very pretty teens, an elf, a half elf, and a human thief, team up with a badass Druid named Allanon (hello, Manu Bennett, love you!) to stop Demons from taking over the world. In order to do this, they have to use magic elfstones to save a magic tree. Luckily for the viewer, this is all set in CGI Enhanced New Zealand. The scenery is pretty and the actors are pretty but the dialogue – oh, dear.

Whether or not you like the show will depend almost entirely on how you feel about very modern YA dialogue in the hands of fantasy characters. Manu Bennett is a veteran actor who is in his element fighting CGI Dark-Elf-Demon-Orcs, and the younger actors, Austin Butler (Will), Poppy Drayton (Amberle), and Ivana Baquero (Eretria) commit to their parts, but the lines veer from clichéd (“It has begun!”) to gratingly anachronistic (“Have you no respect for Elvin traditions?” “Only the ones with parties!”).

It’s nice that the dialogue doesn’t rely on thee’s and thou’s, which can be another kind of grating, but surely it shouldn’t sound like these people just walked out of their Freshman College English 101 class and are headed to the dance club. Some people don’t mind this at all. Personally, it made me want to run screaming from the room. Mileage will vary.

It’s hard to judge a show by the pilot, but I’ll usually stick with a show no matter how awful the pilot is if I like the characters. I can honestly say that at this point I do not care what happens to anyone or anything in the show. However, there are a couple of rays of hope:

So I’m supposed to use Elfstones, which I don’t have, to protect a princess, who doesn’t want to be found, from a Demon horde bent on laying waste to the world? And even if I succeed, which is entirely doubtful, my life could still be doomed because magic will have fried my brain. I liked it better when we didn’t talk.

See, there was some at least slightly witty banter that worked, and that helped establish plot and character. Maybe this show will become wildly entertaining. Maybe it will develop emotional stakes. Right now, the world feels pretty but the cultures feel hollow. The world also looks very white (although Bennett is Maori and there is a black elf character who I gather will be important to the plot later on). The script sounds like someone took Gossip Girl and Fellowship of the Ring and stuck them in a blender (not in a good way). There’s room for growth here but I’m not in a hurry to keep watching.

Alas, a couple of years ago I tried to re-read Dragonlance Chronicles and found it unbearable. It was awful. It was bad fan-fic. It was a soap opera in which you could almost see the characters rolling dice and consulting their character sheets before anything happened. When I read it in my teens, this felt fresh and exciting, but by now it feels clichéd and hackneyed. So maybe that’s my problem with Shannara. I have already read about elves and druids and thieves and halflings going on quests and just making the cast younger and prettier doesn’t make the story feel new to me.

By the way, this show appears to be aimed is for a young audience, mostly teens. There’s quite a bit of gore, which bothered me because it seems edited in after the fact. It didn’t fit the tone. It was like they filmed a scene, decided it wasn’t edgy enough, and threw some fake blood over everyone. Other than that and some innuendo and heavy flirting, the pilot was pretty tame. I ran it by my tween daughter but I accidentally biased her opinions by snarking all the way through the pilot. However, I believe these two comments are the genuine, unfiltered opinions of MTV’s target audience, as voiced by my extremely geeky tween daughter:

Honorable mention goes to the fact that John Rhys-Davis plays an elf king and the fact that not one but two characters are undergoing separate “Chosen One” character arcs. In case you miss it, Amberle is the last serving member of The Chosen. This is not a subtle show.

Many wonderful shows had terrible pilots. Heck, many had terrible first seasons. Maybe this time next year The Shannara Chronicles will be must-see TV. But it sure isn’t now. I hope the young actors walk away with big paychecks, a nice addition to their resume, and glowing future careers in better shows with much, much better scripts.

Currently the pilot, which consists of the first two episodes, is streaming for free and the next two episodes can be watched on MTV or purchased from iTunes.