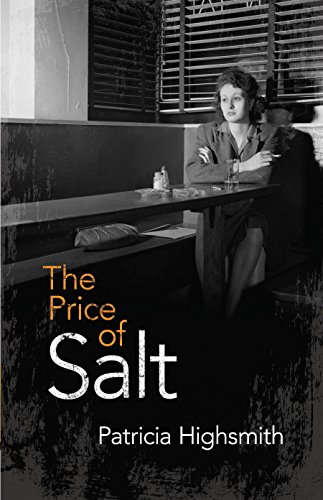 The Price of Salt

Because of its Christmas “meet cute” and other pivotal scenes that take place at Christmas, I consider the groundbreaking classic The Price of Salt (also published as Carol) to be a holiday book, although much of it takes place at other times in the year. With that in mind, December is the perfect time to read this short novel about two women who meet during the Christmas season in New York City and who find love and happiness despite everything 1952 can throw at them.

Our story begins in a crowded department store where Therese works as a salesgirl. Therese is an orphan (her mother is alive, but abandoned her as a young child) and lonely. She has a boyfriend for whom she shows little enthusiasm. Then one night a customer makes her way through the crowd to ask about a doll:

Their eyes met at the same instant, Therese glancing up from a box she was opening, and the woman just turning her head so she looked directly at Therese. She was tall and fair, her long figure graceful in the loose fur coat that she held open with a hand on her waist. Her eyes were grey, colorless, yet dominant as light or fire, and caught by them, Therese could not look away.

After the woman (Carol) leaves, Therese impulsively sends a Christmas card to the delivery address. Just as impulsively, Carol comes back to the store and invites Therese to lunch. Carol is going through a divorce, missing her young daughter terribly (she has split custody) and clearly adrift. Therese, who has spent her entire life adrift, suddenly has a focus, and that focus is Carol. The next thing you know the women are on a road trip and having a romantic and sexual relationship. However, Carol is under tremendous pressure from her estranged husband to end things. Will love survive? If not, would I review this book for you? I would not, so, there you go.

In romance terms, we only get Therese’s viewpoint, so Carol is a little bit mysterious. Initially the romance seems like a crush on Therese’s point and a desire for distraction on the part of the older and wiser Carol. Their romance is imbalanced in terms of age (Carol is constantly reminding Therese, quite condescendingly, that Therese is much younger than Carol) and class (Therese is poor and Carol is rich). It’s also imbalanced in the sense that Therese has nothing to lose while Carol has everything to lose. Therese’s friends are bohemian artists who would probably accept her relationship with Carol, and she’s not very close to them anyway so if they rejected her she wouldn’t experience a great loss. She has no family and no career to lose (she wants to design sets for theater but is having a hard time getting work). Carol is desperate to retain partial custody of her daughter, so for her exposure as a lesbian is a terrifying prospect.

Initially Therese is frustratingly passive and quiet, but the book is as much a coming-of-age story as it is a romance. As the story moves along, the relationship becomes more balanced. Therese develops more empathy for Carol and a greater understanding of her, and is able to offer more support. Carol softens and allows herself more emotional vulnerability. The two women seem to really enjoy being with each other and their relationship starts to feel like a real, solid thing. Above all, it is clear that for Therese, Carol will always be The One:

Carol raised her hand slowly and brushed her hair back, once on either side, and Therese smiled because the the gesture was Carol, and it was Carol she loved and would always love…It would be Carol, in a thousand cities, a thousand houses, in foreign lands where they would go together, in heaven and in hell.

As a work of language, this book is simply gorgeous. I love the writing style. I adored the depictions of the way repressed feelings can suddenly pour out of a person, and the way that infatuation can rest on the smallest details:

But Therese loved it, because she knew this was exactly what Carol would always do, be thinking of something else and let the milk boil.

The ending is mostly happy but there is one thing that broke my heart:

Carol loses custody of her daughter.

However, even that is pretty kickass, because:

Carol loses custody because she refuses to “live by a list of silly promises they’d made up like a list of misdemeanors” and in doing so she gains her pride, autonomy, and freedom.

When I review a classic it’s difficult to assign a grade, partly because I have to decide whether to grade the book according to the context of 1952 or the context of 2020, and I have to decide whether to apply a romance lens or not. As a literary novel, this book is flawless. As a romance, it is somewhat constrained by the enigmatic quality of Carol. By the end of the book, Carol is more vulnerable and also more respectful of Therese, and Therese is more mature, confident, and experienced, which means that the book ends just as the real romance, as opposed to a deep infatuation, is beginning.

This was a pioneering book when it was published in 1952, because it has an at least somewhat happy ending. The author published it under an alias and a year later it was re-printed as a pulp novel. This article in the New Yorker talks about the context in which the novel was written and its publishing history. It’s a must read even if you don’t read the book.

Many printings later the novel was made into Carol, a 2015 movie starring Cate Blanchett and Rooney Mara, which is mostly but not completely faithful to the book and which has some great Christmas scenes.

The Price of Salt by Patricia Highsmith