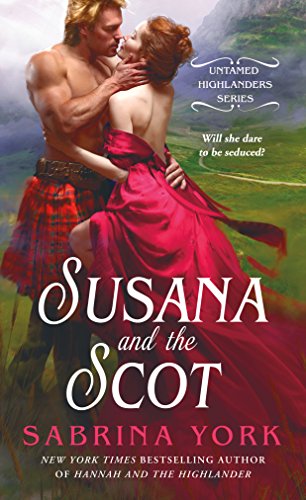 Susana and the Scot

This RITA® Reader Challenge 2017 review was written by HeatherT. This story was nominated for the RITA® in the Long Historical category.

A SCANDALOUS TEMPTATION
Andrew Lochlannach is famous for his conquests, on and off the battlefield. When a fellow warrior challenges him to a kissing contest, he wastes no time in planting his lips on ninety-nine lovely lasses-an impressive feat of seduction that gets him banished to the hinterlands. Still, Andrew has no regrets about his exploits-especially his embrace with the most beguiling woman he’s ever met…

AN UNDENIABLE PASSION
With flaming red hair and a temper to match, Susana is not some innocent farmgirl who gives herself over easily to a man, even one as ruggedly handsome as Andrew. The wicked Scot may have won a kiss from the headstrong beauty in a moment of mutual desire, but Susana refuses to be just another one of his conquests. Andrew must convince the fiery lass that even though he is not playing a game, losing her is not an option…

Susana and the Scot is utterly adequate. It has a beginning, middle and end. I finished it last night and had to go back and look at the book this morning to remember the hero’s name (it’s Andrew). The writing is perfectly acceptable, even if it does stray into purplish prose on occasion. The plot is relatively easy to remember because there were few surprises.

This is a second book in a series, although it was easy to figure out what must have happened in the previous book. This book opens with Andrew and his best friend on their way to Dounreay. Andrew’s older brother recently married the eldest daughter of the Laird of Dounreay, and so for Reasons has an obligation to protect Dounreay with arms and men. Andrew and the best friend, whose name is Hamish (I looked it up) are comparing notes about the women they have kissed. They have a bet regarding which of them can kiss one hundred women first. Andrew is one kiss away. As they ride and talk Andrew angsts about the bet and vows to stop it. You see, about six years ago he met a girl, Mairi, and she was The One, but she died and woe is he.

On their way into Dounreay, Andrew and Hamish meet Susana, the second daughter of the Laird of Dounreay. As meet-cute goes, it is pretty good. And here’s the thing – Susana is Mairi . . . I KNOW . . . amazing, right? Except that Andrew doesn’t see that but just sees that she has the same look as Mairi and he’s all hot for sister. Honestly, Andrew doesn’t seem all that bright sometimes. Susana, on the other hand, knows exactly who Andrew is – from her perspective he’s the cad who loved her and left her years ago. Susana is also ticked because she has been running Dounreay’s defenses along with her captain of the guard and she doesn’t think they need Andrew’s help.

Instead of building tension and developing the relationship, Andrew just can’t help himself and he kisses Susana right away and it is MAGICAL. Susana, on the other hand, has decided that two can play the game of love ‘em and leave ‘em and so from her perspective, she’s the one stalking and seducing him. Their relationship starts immediately and there isn’t a jot of tension about whether they will “get” together. They are together practically from the moment they meet. There is a lot of sex with too much pounding.

To fill up the rest of the book, the story is about conniving neighbors and land and stuff and there is a Spy In Their Midst, but who the spy is is immediately obvious, and there is a kidnapping and rescue, and the guilty are discovered and punished, the end. Seriously, it was fine, just fine. Not boring — simply predictable.

There IS one exceptionally bright spot in the book – Isobel, Susana’s five-year old daughter (do the math) who looks amazingly like Andrew. I KNOW! Isobel is a pistol (but don’t give her one, she’ll shoot you with it). She’s a hellion – funny and independent and does dangerous things, not because she’s Too Stupid To Live but because she’s willing to take risks and accept the consequences. Not content to be a plot moppet, Isobel steals the show. The “victim” of the kidnapping is Isobel, but we are not worried for her safety for a minute. She is a menace – we should be concerned for the fate of her kidnapper, but he is a Bad Man and he gets his comeuppance a little more spectacularly than we, or Isobel, expected. Hamish is kidnapped with her and promises to save her. Here is Isobel’s response:

Had her hands not been tied, she would have patted him. It was very sweet that he wanted to rescue her. And though he was very old [he is in his early 20s], he was valiant. Of course, it was more likely that she would rescue him than the other way around – given his age – but she didn’t mention it because Mama had always taught her to try to be respectful of her elders. She’d never really excelled at being respectful, but she did like Hamish a lot.

I really have nothing more to say about this. The plot goes from A to B to C without deviation, broadcasting its intent every step of the way. I didn’t truly care about anyone (except the spunky Isobel), but I didn’t dislike anyone (except the villains) either. Everyone fulfills their role exactly as expected. They show up and play their parts while Isobel zips about climbing on roofs and practicing archery in the library. It’s fine.

Susana and the Scot by Sabrina York