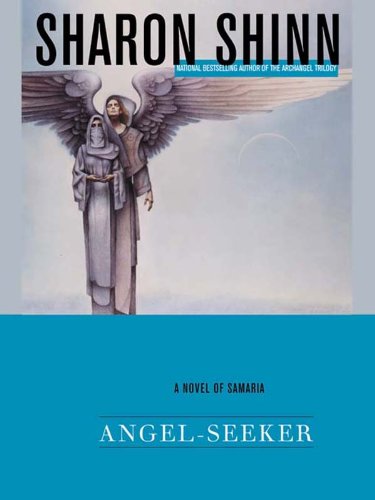 Sharon Shinn is typically classified as a science fiction/fantasy author, but really, she’s a romance novelist. A romance novelist who sets her stories in different worlds from ours, and there’s not a whole lot of bumpin’ and grindin’ going on like there is in most mainstream romances, but all her novels thus far have centered around love stories. Oh sure, there’s usually some nominal bit of intrigue to her plots and some of them feature interesting SF concepts (even if they’re not particularly well-fleshed out), but her stories are all about people falling in love.

Her newest novel, Angel-Seeker, is the fifth book set in Samaria, a world populated with refugees from a destroyed Earth. Sounds like an old SF chestnut? Well, Samaria has a rather interesting twist: a small portion of the population consists of gorgeous winged beings called angels, whose jobs are to fly into the stratosphere to sing prayers to a God named Jovah (who provides whatever help is needed, from medicines for a plague outbreak to intercessions for inclement weather). Feeling intrigued? Just a quick warning: Angel-Seeker is not for the uninitiated. If you haven’t read the other novels in the Samaria series, don’t bother picking this up. At the very least, read its prequel, Archangel first.

So anyway, on to the review. Here’s some good news: If you really liked Archangel but thought Rachel should’ve dropped the rather stiff-rumped Gabriel for the gorgeous, golden, sweet-natured Obadiah, you’ll be ecstatic because Obadiah finally gets his own story, and it was worth the wait. Shinn weaves together two most excellent stories of two different sets of people falling in love.

The book starts a year and six months after the cataclysmic events that ended Archangel. First, we meet Elizabeth, a wealthy man’s daughter who has fallen on hard times after being orphaned. She currently lives with a cousin on his farm, essentially working as an unpaid servant. When presented with an opportunity to run off to Cedar Hills, a new angel stronghold, she decides to try her luck being an angel-seeker in the hopes she can regain her life of luxury.

Angel-seekers are essentially groupies. These women do their best to establish sexual relationships with angels, not just because angels are powerful, gorgeous and exotic in their own right, but in the hopes of becoming pregnant. If the pregnancy results in an angelic child, their future and status are assured because angel babies are so rare.

Soon after moving to Cedar Hills, Elizabeth strikes up a relationship with the handsome but rather feckless angel David. She also meets an Edori man named Rufus who works as a construction worker. Rufus was a slave until the archangel Gabriel outlawed the practice. He seems to love her, but he can’t give her an angel baby and the cushy life she’s looking for. Quite the dilemma, eh? (If you can’t guess what the outcome is to this love triangle, you gotta be brain-dead.)

The second love story is a lot more compelling. The angel Obadiah is assigned a new job by the archangel Gabriel: to pacify and negotiate with the Jansai. The Jansai are a people whose primary commerce used to be capturing and selling Edori slaves, and they are not happy with Gabriel’s new interdiction. But Obadiah is happy to accept this thorny commission because he’s more than half in love with Gabriel’s wife, and the assignment allows him distraction and distance from temptation. However, one of his wings is seriously injured on his way back from his first talk with the Jansai leader and he crash-lands in the middle of the desert. Luckily for him, a young Jansai girl, Rebekah, finds him on her way to get water for her family’s caravan.

Rebekah, like all other Jansai females, lives a life so sheltered it’s oppressive. It’s obvious that Shinn modeled the Jansai very closely to wacky fundamentalist Islamic regimes like the Taliban. Jansai women are required to keep all of themselves (including their faces) completely covered when not in the presence of immediate family, and are not allowed to go out in public unaccompanied by male relatives. Women found guilty of being â”impureâ€ are put to death. So Obadiah is completely out of Rebekah’s realm of experience, but she has a strong streak of independence to go with her compassion, and so their love story begins: she secretly helps nurse Obadiah back to health in defiance of everything she’s ever been taught, and they eventually become lovers when she returns homeâ€”quite the dangerous enterprise for both of them, especially Rebekah. How the two of them achieve their happily-ever-after is quite the suspenseful ride, but the resolution is very, very satisfying, if occasionally heart-stopping.

I really enjoyed this book. It is mostly character-driven, and Shinn does a good job with the people who populate the novel. I loved Obadiah when I first encountered him in Archangel, and I loved the opportunity to finally get into his head and see things from his point view. On the other hand, I found Rebekah and her wishy-washiness regarding Obadiah a little annoying at times, but then I realized that growing up as she did, her feelings about what she was doing and who she was doing it with could hardly be unequivocal. Elizabeth, however, was the character who grew and changed the most, and the transformation was very satisfying to see. She starts out as an unhappy, rather petulant woman who longs most of all for a life of luxurious idleness, and by the end of the book she has matured tremendously and manages to build true happiness from her circumstances.

Shinn also manages to present the angel-seekers with a lot of depth and sympathy. The seekers are generally treated with contempt by both people and angels, but Shinn convincingly shows us why many of these women are driven to do what they do, especially Elizabeth and her circle of friends.

I only have one small beef with the book, and it’s in the way Shinn writes about the Jansai. I know there are cultures that are based on oppression of the weak, and I can buy that these types of cultures don’t always produce the nicest people. I didn’t really have a problem with seeing many of the Jansai men being presented as greedy, brutish and selfish. But not only are they evil oppressors, they’re also FAT. And DIRTY. What the fuck? I think the dirty bit was what bothered me the most, because I grew up in a Muslim country (though I was raised Buddhist and am now officially agnostic), and I’ll tell you what: ritual purity and cleanliness are very important to most Muslim cultures. I would’ve appreciated a little bit more depth and balance to the portrayal of the Jansai; throwing in “fat and dirty” to add to their general villainy essentially pushed the race from being credible to being caricatures.

Anyway, if you enjoyed the previous Samaria novels, what are you waiting for? Go get it; this is one of the best so far. (But just to give you an idea of my tastes: Unlike most other readers, I found Archangel a bit underwhelming and really, really liked Jovah’s Angel.) If you’ve never tried Sharon Shinn and you like love stories set in other worlds, then check her out, she’s one of the best.

Notes:
The Samaria novels, in the order in which they were published: