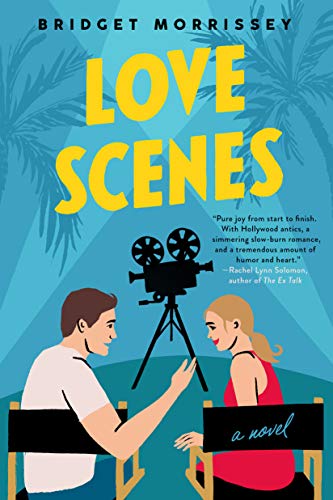 Celebrity romance is one of my favorite tropes, so I was super excited to read Love Scenes. I tried to make it through this book, I really, really did, but I had to put it down halfway through. I had no issues with the hero or the heroine or their conflict, but the heroine’s incredibly toxic family makes up a huge part of this book and I couldn’t deal with their chronic mistreatment of her.

Sloane Ford is the daughter of two famous actors, and an actor herself. Her character was recently killed off in the TV series she stars in, and while waiting for other work she agrees to help on the set of a movie that her mother is producing, her sister is directing and her brother is writing the score for.

The male lead in the movie is Joseph Donovan. Sloane once starred in a rom-com with him, and he made everyone’s life on set hell, to the extent that she almost quit acting. Sloane doesn’t particularly want to work with him, but feels she doesn’t have a better option.

So we find out early on that during the filming of that rom-com, Joseph was grieving the death of his mom and drinking heavily to cope. He admits to Sloane that he was black-out drunk half the time, knew he was an ass, has since gone into recovery and is trying to make amends for his diva-ish behavior. I didn’t mind that conflict since it’s clear he’s trying to make things up to Sloane while still accepting accountability for his actions.

What I did mind was Sloane’s parents, especially her mom.

When Sloane tells her mom she doesn’t want to work with Joseph because he was a dick to her in the past and almost made her quit acting, her mom gaslights her and tells her she’s making something out of nothing because Joseph didn’t want to sleep with her. Which. WTF. It’s like she pulled some scenario out of thin air just to be cruel.

Later, the lead actress in the film has a legitimate panic attack over doing a nude scene even though she signed a contract saying she would. The director, Sloane’s sister, says they can omit it, the actress agrees to do it in the end, but Sloane’s mom fires her anyway for breach of contract. I’m not sure that even makes sense, but also, hella lack of sensitivity. Sloane’s mom also chews the actress out about it.

Then she decides Sloane can star in the film even though she’s said she doesn’t want to do period pieces (which this is) nor work with Joseph (who she’ll have sex scenes with). Her mom feels she can steamroll over Sloane’s position because Sloane appeared nude a horror film once (which her mom derides) and the family’s money is on the line for this film. Sloane’s sister is right there for all of this and never once steps in to tell her mom to GTFO.

It was at that point I couldn’t do it anymore. The romance wasn’t worth me wading through the toxic family dynamics at play in this book. I hope it ends with Sloane going to therapy, distancing from her family, and finding a found family that respects her boundaries.

Acting like she’s in love with her handsome nightmare of a co-star–in a movie directed and produced by her complicated Hollywood royalty family–is Sloane’s job. But what happens when the lines between script and reality get blurred?

Out-of-work actress Sloane Ford is in desperate need of something to do after losing her steady TV gig. When her famous family ropes her into working as a producer on their World War II-era romance, they neglect to mention that the film will be headlined by Joseph Donovan, her least favorite former co-star of all time. The roguish actor made her life a living hell the last time they worked together, using his movie star good looks and Irish charm to cover for his erratic professional behavior. On their new film set, he promises he’s different now, but Sloane is far from convinced.

As filming gets underway, it becomes clear that anything that can go wrong will go wrong. When the lead actress is abruptly fired, Sloane agrees to step in and take over the role, and she starts to remember why she fell in love with acting in the first place. On camera, she and Joseph share an electric chemistry. Off camera, they’ve been honing their characters and, much to Sloane’s surprise, growing closer. But playing the role of a woman in love with Joseph Donovan is a dangerous business, and the more time they spend together, the less Sloane can tell what’s real between them, and what’s just for show.