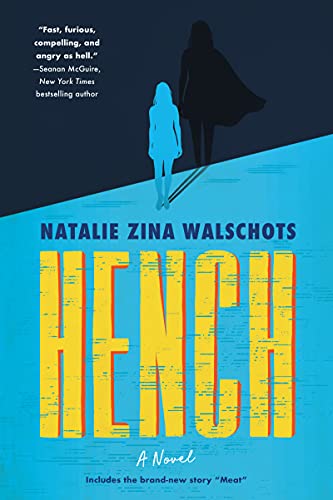 I made a number of mistakes regarding this book.

First, I read it after I received the ARC, which was months prior to release date. Though this makes me an Unintentional Scourge Among Book Publicists, I try to read ARCs as close to release as possible so that I can talk about a book when that book is available to buy, borrow, or request. As I joke often, I’m here to enable everyone else’s poor impulse control, because I have so little of my own.

I had exactly none when it came to Hench. I read it in early July. This is a September book! I read it in July! This is not my usual schedule.

Then I emailed people about it before they were able to buy it. I’m literally the worst. Every time I emailed one person about it, I thought of three more people who would love it.

Further compounding my ridiculousness, my reading a September book in July also meant yet another mistake: I sat down to read over my notes and ended up re-reading massive portions of the book itself. This review took for-EV-er to write because I kept re-reading. I’m an evolving disaster in progress.

So here’s a very brief summary, courtesy of the email I sent to several people:

Hench is a fantasy novel about a data analyst who becomes a henchman for a super villain, in a world with “villains” and “heroes,” similar to The Incredibles, but set in the modern day. The heroine is injured by a “hero” when the scene planned by the villain she temps for goes horribly wrong, and she starts using data analysis and damage projection to figure out exactly how much collateral damage and cost there is to the “heroes” doing their jobs.

Anna Tromedlov is angry. Really angry. There are so many problems stacked against her, from the job market to the viability of her skill set, the imbalance of power assigned to heroes and villains and ordinary people, and the ways in which ordinary people pay for the actions of those powerful people, who in turn spare little to no thought about the larger consequences of their actions.

Anna is smart, and desperate, and I loved being in her head. I highlighted so much of this book I’m sure the file size is larger than when I started.

Here’s Anna with her first villain boss in a temp assignment:

“Anna, thank you for getting Andre patched up the other night.”

“Oh, it was no trouble.” My voice was equal parts syrup and poison.

E heard only the sweetness. He smiled and settled back into the chair, facing the camera. I wondered what it must be like to be so mediocre and so confident at the same time.

Anna is injured very badly in an assignment for E when a “hero” pushes her and breaks several essential bones in her body. But no one believes her when she says that a “hero” did this to her, that it’s his fault – and of course she’s laid off because she can’t work while recovering from the physical and emotional trauma. She was a temp and therefore disposable to the villain. She was an ordinary person in the way, and therefore disposable to the hero.

When Anna starts compiling data that shows how much damage the heroes do, she learns she’s not the only one whose life has been effectively ruined by a “hero” who is never held accountable. Anna has time, and data, and more data, and so she starts a blog (MY GIRL) and goes viral – and becomes a threat to the heroes. Anna + Spreadsheets + Data + Time = deeply satisfying revenge.

And it’s not just revenge she wants: it’s rebalancing. She wants not only justice for herself and others harmed by heroes, but she also wants people to see and understand the damage and failure of the power system that most people accept without question. She wants accountability and transparency, and calculated reckoning of the cost of the system she and others are forced to live within.

Eventually Anna is hired by a supervillain, Leviathan, and with his resources and assets, she creates a lethal, effective team to run campaigns that ruin heroes one by one, exposing, per the cover copy, “that the line between good and evil is mostly marketing.”

The interactions between Leviathan and Anna are ripe for fanfic, fanart, and possibly music videos with lightning jump scares amid soft focus imagery. He’s a villain, he’s consistent and precise, he’s rather scary, he’s flawed and controlled and controlling, and he has his own motivations for taking down the heroes. Anna is also attracted to other characters (I won’t spoil details) and her perspectives on Leviathan, on her colleagues, and on the people around her are part of the delight of her narration. Anna is thirsty for many different beverages in addition to sweet justice and chilled revenge.

Anna and her team, under Leviathan’s auspices, strategically pinpoint the weaknesses of the heroes, making them vulnerable to their own loss of control. Anna becomes a target for the heroes because they know she’s the reason they are losing credibility, social currency, actual currency, and the protection of unwavering good will, and the stakes are raised as each side takes aim at the other. I won’t say anything else except that this is a ferocious, ruthless adventure fantasy about rebalancing power through public image and stripping away pretense, and if you’ve caught some of the analogues to Real Life, which I’m sure you’ve done, you’ll find it is very satisfying.

There’s also a subtle exploration of morality, collective and individual, that I found  endlessly fascinating. If that which we are told is good and noble is really, really not, then what is the value of adhering to behavior that we’re also told is good and noble when it yields harm? Why bother doing what’s allegedly “right” when doing so nets you pain and suffering, especially when what’s “right” is so often really what’s “convenient and comfortable for someone other than you?”

Keller, one of Leviathan’s employees, echoes this idea when he corrects Anna’s impression of henching, aka working for a villain:

He pointed a thick finger at me. “More honest than anything out there. I used to play at being a hero too, just not with a fucking cape. We were supposed to be noble, but we were just as cruel, corrupt, and selfish as anyone else. You just have to hide it, pretend everyone’s doing good.”

“With henching, you know where you stand….”

“Exactly. You own the cruelty, the scheming; it’s all on the surface. No one wants to be a real hero; it’s too hard.”

Henching is extremely honest work. So Anna has to face what choosing villainy, and choosing to target other people’s pain and humiliation, means for her own ability to live with and within herself. While she’s angry and coldly determined that the heroes who harmed many face responsibility, she doesn’t let herself off the hook, either. “How much collateral damage is acceptable” is a question she asks of herself as she asks it in the process of targeting yet another hero protected by false admiration and greed. She’s as ruthless and honest with herself as she is with her work. I adored her.

(Side note. This is far and away my favorite quote:

The beginning starts off slow, but once it gets going, the plot and the stakes increase in speed and impact, and much like a terrible plan set in motion, it’s hard to stop. I couldn’t put it down. If you start it and you’re thinking that it’s a little plodding, keep at it. And for those who are gore sensitive:

Details on gore and violence herein

There are some descriptive passages of Anna’s injuries, of what the physical damage the heroes inflict entails, and in the big battle scenes it can get pretty violent and rather gory, almost gross.

I’m usually not on board with gore or physical/body horror, but in this case, I didn’t mind it as much. This was a world very much like my own but very much not, and (this is hard to explain…I’ve tried writing this sentence three times) the fantasy setting of super heroes and super villains created a boundary line for the parts of my brain that are sometimes too engaged with and too upset by depictions of violence. I knew it wasn’t real. And I knew why the violence was happening. More importantly I was persuaded that it was not gratuitous. While I felt a great deal of sympathy for Anna and for the other characters, I also recognized and connected with her cold desire for destruction and revenge against those who had harmed her. So when the harm shows up in different chapters, it didn’t bother me as much, which is a bit of a departure from my normal dislike of violent media!

As such, your mileage may vary.

In reading and then re-reading this book, I’ve discovered so many more layers, hidden parallels, and very clever dissections of the fictional world of the characters and of the actual reality that this book resides within. Hench is delicious in its anger and ferocity, chilling in its deadpan snark and arctic clarity of analysis and assessment, and meticulous in its nuance. It’s a villainously wonderful good time.