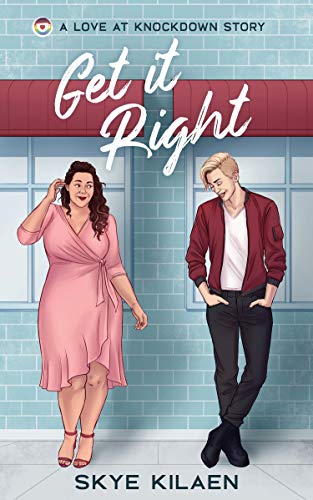 Archetype: Character with a Disability, Criminal/Mafia

Finn is out of prison, building a new life for herself far away in Austin. When she visits a low-income clinic to get a prescription for migraine meds, Finn runs into the one person she least expects to see: Vivi, the nurse Finn worked alongside for two years at the prison’s pharmacy. Finn was devastated eight months ago when Vivi stopped showing up for work one day with no notice. She had always had a massive crush on Vivi, and even wondered if Vivi might be crushing right back, but nothing ever came of it.

Vivi doesn’t seem to be doing well and Finn wants to help her out. Finn isn’t phased in the least when she learns it’s because Vivi’s pregnant and doesn’t know what to do about it. But those old feelings rush back to the surface and Finn still doesn’t feel like she has anything to offer Vivi since she doesn’t have a car, job, or her own place. Can Finn be content with only friendship with Vivi? Or can she get out of her own head and finally reach for the woman she’s been thinking about for so long?

I first picked up Get It Right because I haven’t seen a premise like this in lesfic before. I was a little wary, however, wondering about the ethics of a romance between a nurse at a prison and someone who is incarcerated. While YMMV, the way it worked out felt okay for me because there was never any flirting or anything inappropriate between them at the prison, even if there was a rapport (and yes, attraction). Vivi never took advantage of her position and she shut it down immediately the one time Finn took her hand, which we see in the prologue.

It felt so right.

It was so wrong.

Vivi took her hand back immediately.

“Nurse Curiel?” the guard called from across the room. “Everything okay?”

The nurse in question straightened her back and stood up. “Everything’s fine,” she called back. “Thank you.”

They waited to see if the guard would pull himself up out of his chair and walk over all slow and menacing, as if he’d be plenty happy if Finn was starting something. He didn’t, though. He simply rolled his eyes, re-crossed his arms, and went back to staring around the room.

Vivi turned her attention back to Finn. “That can’t happen again,” she said, her voice so low only the two of them could hear. Not reproachful or condescending. More… regretful.

The whole story follows Finn’s perspective, so we get a strong sense of her challenges in making a fresh start in Austin. She’s there because her cousin offered to help her out, and both of them are living with his step sister. Finn spends the majority of her time at the public library, applying for jobs online. We see the difficulty she has even getting an interview and how badly she wants a job, so she can get her own place. I appreciated that Get It Right doesn’t gloss over this part of Finn’s experiences, or reduce them to a blip for her on the way to love.

Although we don’t follow Vivi’s perspective, she’s so good at emoting with her body that it’s easy to pick up on what she’s feeling. For example, Vivi lights up when she sees Finn at the clinic the first time, only to physically shut down and turn to her more professional persona when she realizes Finn wasn’t there to see her. Although we never learn why Vivi would think that in the first place, this is the first of several signs that Vivi has been carrying a torch for Finn too. Finn is such a useless lesbian that she doesn’t pick up on any of Vivi’s signals.

Vivi and Finn are already in love with each other when they meet up again. That means the romance is about them figuring out that the strong feelings they already have are entirely mutual, rather than watching feelings develop on one or both sides. This worked well for me, because Get It Right is a novella, so it only has so much space to convince me of their HEA. Also, the funniest moment in the story for me is when Finn finally confesses that she’s in love with Vivi, and Vivi yells at her.

“I asked you why you were at the clinic and you held your paperwork up like how could I possibly assume you were there for me. As if I hadn’t had a hundred daydreams of running into you? And you wanted to get caught up? Like oh, hey, we used to work together, so let’s swap a few funny memories from the office and I’ll show you pictures of my cat and we’ll call it a day?”

Finn didn’t remember any sign of a litterbox. “You have a cat?”

“I don’t have a cat!” Vivi threw up her hands in frustration. “I’m allergic to cats!”

They’re adorable when they get out of their own way and I totally believe that they’ll be together forever and ever.

One of my favourite aspects of the story is seeing Vivi decide what to do about an unexpected pregnancy. She’d had a hookup at a queer party with a very sweet bisexual guy who’s back at school in Mexico City and isn’t in any position to be a parent. When Vivi discusses it with Finn, Vivi has six weeks to decide whether to have an abortion before she’ll have to go out of state for it. I appreciated that she takes her time to figure out the right choice for herself, because there’s zero judgement either way about it.

I have one big problem with Get It Right. The epilogue doesn’t work for me at all.

What happens in the epilogue.
Although both Vivi and Finn are in the epilogue, it’s not about them and their relationship. It’s about Vivi gathering the courage to tell her sister that she’s pregnant, which is the first step before telling her extremely religious father and stepmother. (Her father is the reason for the CW about biphobia. We don’t see it on the page, but Vivi describes it to Finn.)

I often finish a book craving an epilogue, but this is the one time I’ve finished a book wishing it hadn’t been included because it doesn’t show any further relationship development between Vivi and Finn. This epilogue left me puzzled and I ended the book on a sour note, wondering if I was missing something.

If you’re looking for a sweet novella to read in a sitting, Get It Right could be a good choice. The characters feel like real people and I was totally rooting for Vivi and Finn. You might want to read a sample to see if it’ll work for you, and I’d recommend skipping the epilogue for your best reading experience.

Get It Right by Skye Kilaen