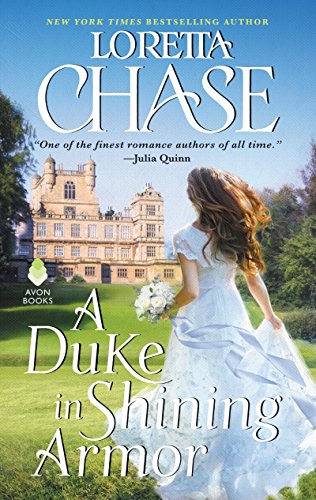 A Duke in Shining Armor

Theme: Off Limits Sibling or Friend

I should have been able to read A Duke in Shining Armor in a day. Instead, it took me a week. And do you know why? Because I purposely kept putting it down once I realized that eventually I would RUN OUT OF BOOK. How DARE this book be over? How DARE it be so incredibly perfect and constructed almost completely of Carrie Bait? It has a book collector. It has a heroine with glasses. It has a dog. It has an eccentric and acerbic old lady. If it had had a kraken, a cat, and someone earnestly trying to explain a scientific concept with their shirt off, we would have achieved the Carrie Singularity and I would have been sucked into the pages never to return.

The plot is as follows. The ridiculously named heroine, Olympia Hightower, is supposed to get married to The Duke of Ashmont. Ashmont has two best friends: Ripley and Blackwood. They are also Dukes. Minutes before the wedding, Olympia gets drunk on brandy, panics, and escapes in all her wedding finery out the window. Ripley catches Olympia in the act and since he can’t let a drunk bride stagger about the streets on her own, he goes with her. Eventually they take shelter with Ripley’s slightly eccentric aunt and proceed to clear up misunderstandings with remarkable clarity. The one thing they can’t seem to get over is that they’ve clearly fallen for each other, and of course Ripley feels that he cannot make off with the bride of his best friend.

Along the way, Olympia rescues a dog. It is a glorious scene. I may have swooned with delight. Olympia also charmed me by being a rather obsessive collector of rare books. She appreciates their monetary value, she appreciates their beauty, and of course she reads them. Voted “Most Boring Girl of the Season” for seven years in a row, Olympia is both horrified and thrilled by her own escapades. She’s both strong-willed (she says she has to be, because she has six brothers) and kind. She’s also just the right amount of nerdy:

“You don’t know me as I truly am,” she said darkly. “I can prose on about first editions and Maioli’s Library and early copperplate engravings until my listeners keel over in a dead faint. Worse, I have a System, inspired by the American president, Mr. Thomas Jefferson, who applied Bacon’s table of science to the organization of books. My own method is rather more complex, and I can hold forth on the topic for about twenty times longer than listeners can bear to hear it.”

Ripley and his friends are known as the Dis-Graces for their rakish ways, which consist of brawling, drinking, and having sex with willing partners.  As is so often the case in books about a rake, he sets his rakish ways aside to help Olympia. He seems to be one person with his friends and another with everyone else.  He’s consistent about being wry, funny, and loyal.

Ripley and Olympia are a great team, and their chemistry is also great. However, what makes them special is that they become great friends. It a rare and happy thing to be able to say, as Leslie says to Ben in Parks and Recreation, “I love you and I like you.” Olympia and Ripley start off on somewhat adversarial ground, but they also like being together. Their banter and conversation was my favorite thing about the book.

Generally, I dislike romances that involve infidelity, which is technically the entire plot of this romance. Will Olympia and Ripley get together even though they each have loyalty-based reasons not to (Olympia is loyal to her family, which needs her to marry well, and Ripley is loyal to his friend). This is a romance, so we know that Olympia and Ripley will get together, but there’s considerable suspense in finding out how they can get together without being horrible people, especially since Ashmont (the original groom), while not wildly in love with Olympia, is genuinely fond of her.

The ending is resolved in a way that is satisfactory given the fact that this is the first of a planned series and therefore Ashmont is presumably getting his own book soon. Much of the resolution involves Dudes Working Out Their Issues With Violence, which is much more funny than it sounds, especially given Olympia’s utter disgust with this messy behavior. Apparently, not even having six brothers can prepare Olympia for the mayhem involved with three Dukes. I adored this book. It made me happy except for the part where it actually ends, because I wanted to hang out with Ripley and Olympia and the dog and the eccentric Aunt forever.

A Duke in Shining Armor by Loretta Chase