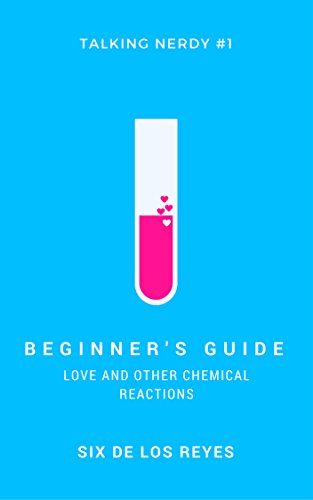 I downloaded a sample of this book after Courtney Milan raved about it on Twitter. I’ve been doing a lot of sample shopping, and not many books make it past the sample with me. I’m in something of a grumpy slump with my reading, a state which is entirely my own fault, and when I wanted more past the sample of Beginner’s Guide, I was very excited.

Kaya Rubio is a grad student studying molecular genetics in an experiment that involves spending a lot of time in a lab running the same experiment repeatedly, trying to re-create the same results she achieved once but hasn’t seen again. Her world is very, very small: she lives with a close male friend with whom she also shares lab space, and her circle of human connections in the beginning is even more narrow. Besides her roommate/lab partner, there are two interns, both named Teddy (one is a dude and the other is a girl, so they’re Teddy-boy and Teddy-girl), and there’s  Nero, the guy who owns the cafe they hang out in, appropriately named “In Lab.”

Kaya also has the biggest, loudest, most ebullient family ever, and she often feels incredibly misplaced when she’s with them, which is pretty often. Everyone in her family gathers for parties that are so over the top, you have to read the descriptions. It’s like her family can combine to form a rainbow-sparkly-fireworks-strobe-lit Voltron, and while they all enjoy and participate in the uber-parties for major family events (and with a family that big, there are major events every other week) Kaya often feels alienated from her family, and misunderstood. She sees them often, but they can’t drop in on her, as she lives in Manila, and they’re at least 45 minutes outside of it, so there’s some space of time and distance between them, though they are a major part of her life over all.

Kaya is brilliant, deeply curious about science and all things scientific, and introverted in the sense that she sees absolutely zero point in wasting words and energy talking about nothing (I’m with you there, Kaya). When the sparkly party Voltron of her family nudges her one time too many about being single and about being alone, she decides to design an experiment to find a suitable date and possible partner in time for a (mega) (they all are) family wedding.

This book is a spin on a lot of familiar tropes and character types that I like. There’s the genius protagonist who is completely confused by human interaction, and seeks to understand it through the application of specific methods to produce predictable results. There are friends who care for her, making sure she has a safe place to live near the lab, and people who seem interested in getting to know her or at least welcome her into their circle of friends, but aren’t sure how. And there’s her family, who don’t always understand her, but love her and care about her happiness. And, of course the “I need a date for this major event/wedding/family gathering and I don’t like any of the dating part,” is very familiar.

The “let’s apply science to emotions!” trope isn’t new, either, but in this book, a lot of time is spent with Kaya developing and designing her own experiment. These were parts of the story I found to be slow – more than slow, even. Glacially paced. When Kaya gets stuck in her own head, circling around her theory or developing another methodology for her experiment, it dragged for me. There were points where I became really irritated with her for getting in her own way so goddam much, or for explaining all the finest details of her experiment, the purpose of it, the steps she was creating, even though I knew that the deep dive into science from Kaya’s point of view also means a deep dive into everything Kaya was doing and thinking. Sometimes her brain was fascinating and very fun, especially when she’s talking with someone, or when she’s with her family. Sometimes it was like a too-hot room with no windows and I wanted to yell at her a little.

The story starts slowly, but once her circle of acquaintances increases and she finds herself with a collection of friends with whom she doesn’t have to worry in advance what she’s going to talk about, the plot moves much more quickly. Outside influences (catalysts!) change Kaya in small but important ways.

The best parts, really, were her conversations with Nero, who wasn’t sufficiently developed for my taste, but partly because the story is told entirely through Kaya’s first person point of view (past tense, for those of you who dislike first person/present).

This conversation occurs when Kaya is explaining to Nero what she’s working on. She’s learned to give the very, very superficial version because most people aren’t interested in the deep nerd dive she adores, and Nero is not having it:

“Sorry,” I said, facing him, “it’s not really that interesting. It’s really boring.”

His brows drew together. “Who was it?”

I turned away from the intensity in Nero’s gaze. “Who was what?”

I nearly dropped my cup of chocolate. My heart rate was elevating. I suspected it was a side effect of my lack of sleep.

Oh, yes, lack of sleep. Emotions and physical reactions to emotions are so unfamiliar to Kaya that she misunderstands attraction and assigns blame to anything other than the idea that she’s really into Nero. He’s her “null hypothesis” – the person who is so unsuitable, and such a poor match for her, that there will be no reaction and thus she can establish her baseline upon which to compare all the other dates she goes on. (And yeah, that ALWAYS works out the way characters intend, lucky for us.)

Nero is frustrated by Kaya and still fascinated by her, and she misreads all of it, even when her roommate tells her Nero was checking her out. Nero finds Kaya’s experiment both threatening and ridiculous, but agrees to participate, though he doesn’t understand the entire scope of his involvement. He really wants Kaya to understand that emotions are messy, like he is, and even though Kaya dislikes all things messy, she’s going to have to tolerate that for the success of her experiment:

“You have an amazing beautiful brain, but you can’t always rely on your brain. There aren’t always answers to all the questions. Or neat solutions or formulas. Life is messy.”

I scoffed. “Are you going to tell me to follow my heart?”

“No, that shit doesn’t work either,” Nero said, “I’m just saying, you can’t correct who you are as if you’re a mistake. You can change for the better, but you can’t change who you are as a person. Am I making sense?”

“I don’t know…. I don’t want to change me…. That’s why I set up the parameters of the Boyfriend Experiment the way I did. Because this is who I am. And I really like my brain, and I just want someone who understands it. Someone whose brain I can also understand….”

I looked up and found it ironic to be standing underneath the left hemisphere’s amygdala. “You’re going to tell me I’m human.”

“You are. You’re not some alien from some planet where logic and reason and rejection of emotion is the philosophy to live by.”

“I’d move there if that planet existed. I hate feelings.”

He laughed. “I know. Feelings suck.”

Seriously, if you love science and experiments and science nerdery, you’ll probably really like this book. Much of the story is about Kaya’s journey from accepting herself to appreciating herself, and her growth from keeping a massive distance between her thoughts and her emotions to learning how to relate them to one another, and to take the risks involved in engaging with other people. When Kaya invites her new circle of friends to one of her family’s mega-parties, she does so because her mother tells her to, and she’s worried about it. But bringing her science friends, all people she’s met at grad school and in the lab, to meet her family, and seeing how they all fit within her family, especially Nero, allow her to see how she also fits within her family, and that she belongs as she is.

Because the story is much of Kaya’s journey, the romance is understated in much of the book, and when it develops, it’s in small jumps and starts, and in moments that Kaya misinterprets but romance readers will not. Kaya makes a comment just about halfway through the book that I think highlights the theme of the story as a whole:

Often scientists are seen as cold and calculating, so out of touch with their emotions, they’re barely human. But science is passion and beauty. And if you’re willing to look at it from a certain point of view, science tells the greatest love stories. From the cosmic big bang to Watson, Crick, and Franklin’s elucidation of DNA are stories of man’s endless search for knowledge. For finding our place in this vast universe.

Kaya is very comfortable with the romance of science, the romance of experiment and results, hypothesis and validation. And the romance here isn’t merely between Kaya and Nero. There are as many variations on love and romance in the story as in the quote above. There is Kaya learning to have friends, and learning to develop confidence in herself emotionally. The romance is also Kaya learning to appreciate who she is, what she does, and celebrating it more – and including herself happily in the spinny fireworks bonanza of her family. There’s a difference between predicting and observing someone or the pattern of someone’s feelings, and understanding and caring about someone’s feelings, and that’s the heart of this story, I think. Kaya learns greater empathy, and most importantly, she learns to have greater empathy for herself.