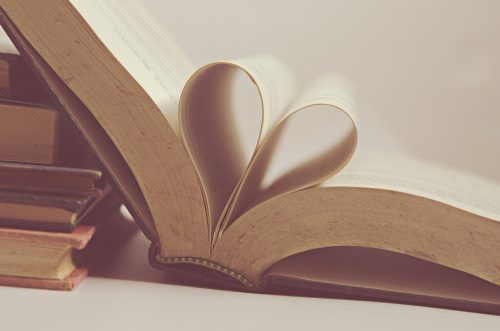 This is where we try to make sense of our reading lately. Clearly there’s one standout that a majority of SBTB has been staying up late to finish.

Aarya: I just finished He’s Come Undone, ( A | BN | K | AB ) an anthology about starchy, buttoned-up heroes with contributions from Emma Barry, Olivia Dade, Adriana Herrera, Ruby Lang, and Cat Sebastian. They’re all authors I’ve enjoyed before and it’s a rock-solid collection. My favorite story is by Olivia Dade because it features murder dioramas (I’m a sucker for macabre humor!), but all the novellas are excellent. A | BN | K | AB
I’m in the middle of Farrah Rochon’s The Boyfriend Project (out June 9). I’m loving the female friendships that anchor the book (the heroine Samiah and her friends meet in a viral encounter when they realize their asshole date is three-timing them). I also like how work-oriented the story is; Rochon doesn’t scrimp on details about the tech startup/app development. However, I’m concerned about the deception storyline; the hero Daniel is undercover for work reasons when he meets Samiah. It’s not my favorite plot device, but I have faith that Rochon will resolve it well.

Maya: Have you heard of the Nutshell Studies of Unexplained Death???

I’m also reading The Boyfriend Project and agree with everything you said! Samiah and co are so funny, but I’m a little worried about the reveal when Samiah learns the real reason Daniel has started working at her company. But it’s a really fun and engaging read so far!

Aarya: That link is so cool, Maya! Frances Glessner Lee (of forensic science fame in the mid-20th century) is discussed in the Olivia Dade novella; the art teacher heroine assigns a murder diorama project to her students. She also makes/sells intricate miniature crime scenes in her spare time. A | BN | AB
I dunno what it says about me that I’m so interested in murder…surely it’s a normal curiosity.

Catherine: I’ve just finished The Physicians of Vilnoc by Lois McMaster Bujold. This is the latest in the Penric and Desdemona series, and it’s very good, but it is also about a plague, so if you are looking for something nice and escapist, maybe save this one for later. And I’ve just started The Roommate by Rosie Danan, which is enormous fun so far, and very funny. The heroine moves to LA to be with the man she has a crush on, but he bails on her and she winds up sharing his flat with a random guy he found online who turns out to be a porn star, and also a total sweetheart. It’s not coming out for a bit – sorry! – but definitely worth looking out for when it does if the first ten chapters are anything to go by.

Sarah: I’m reading the Murderbot series ( A | BN | K | AB ) again because I finished the novel Friday night and am now rereading everything sorry need to go back now bye. A | BN | K | AB
Sneezy: I’ve just started The Roommate by Rosie Danan and going back to The Empire of Gold by S. A. Chakraborty for all the scenes I read through my fingers. The Empire of Gold made me sniffy the first time through, and now I’ll let it break my goddamn heart.

Elyse: I just finished The Roommate and I loved it so much. It’s sweet and sex positive and I read it in 2 days.

Aarya: There is a lot of love for The Roommate, and my resolve to wait until September is weakening. Catherine: Well, I just stayed up until stupid o’clock to finish it, so I say dooooo iiiiit, Aarya!

Sneezy: Hugglez Tara, we’ve all been there

EllenM: I finally read Sorcery of Thorns after having it on my bookshelf for months and I LOOOOVED IT!!!! it got me right in my howls moving castle loving feels. I also just read Marry in Haste by Anne Gracie ( A | BN | K | AB ) and while i definitely really enjoyed it and will probably continue the series i never QUITE got over my irritation with the deployment of the extremely anatomically unlikely “Hero Can Feel She’s Not a Virgin During Sex” trope. especially when all the same plot things could have been accomplished with a short postcoital conversation.

Claudia: Oh yes, that ruined Marry in Haste for me, and I loved the premise!! A | BN | K | AB
I picked up Redeeming the Reclusive Earl by Virginia Heath ( A | BN | K | AB ) and once I got past the title it was a very enjoyable Beauty and the Beast-inspired romance. The hero is a true grump.

Carrie: I just started The Trials of Koli, which is the second book in the Rampart Trilogy by M.R. Carey. I loved the first book (The Book of Koli) ( A | BN | K | AB ) so I am much excited about this.

Aarya: Ellen, I freaking love Sorcery of Thorns and I raved about it last year. That book reinforced my weakness for sardonic/Slytherin-like sorcerers with silver-streaked black hair (hey, nearly perfect alliteration!). I blame Vanyel.

Catherine: Am I allowed to say I just devoured Paladin’s Grace in one day and loved every minute of it?

Tell us about your reading month!