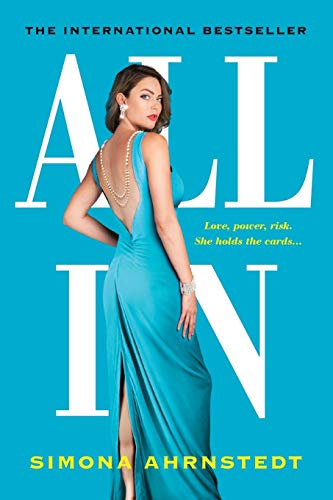 I keep saying that I don’t like contemporaries, but that’s just patently not true.  Is it going to stop me from saying it? Probably not, but I need a hook to get me interested at all (unlike with historicals where all I need is a big dress on the cover and I’m in).

The hook here is that the book takes place in Sweden, written by a Swedish author, and was released in Sweden in 2014, and has now been translated into English. My ability to read Swedish is currently limited to menus, signs related to traveling, and genealogical records, so you see what’s important to me.

Natalia de la Grip is the daughter of one of Sweden’s noble families – she a countess and a brilliant financial mind in her own right. Her family runs an old-school financial institution, but she’s not allowed to have any hand in running it because her father is a sexist old fart who doesn’t believe women should be touching money. Or doing things.

David Hammar is an upstart in the financial industry. He started with like, nothing, and used his firm to slash and burn his way to the top. He went to the Rich People School on scholarship, and has a huuuuuuuuuuge chip on his shoulder when it comes to Sweden’s elite, including and especially the de la Grip family. He’s got a plan to completely take over and gut the de la Grip company, including selling off the family castle (which is in the company’s name for tax reasons or whatever).

David and his partner (and best/only friend), Michel, know that it would be easier to take over the de la Grip company if they had someone from the family on their side. So he invites Natalia out to lunch, and they hit it off, but not in the way he was expecting. It’s not too long before they’re in bed. Natalia doesn’t know that he has designs on taking over her family’s business, but she does know they are competitors and that her father and brothers don’t like David at ALL.

Both of them are like, “This can only happen once” (the Swedish title  of the book is En Enda Natt, or “Only one night”) and we have all read enough romance to know how well that works out for anyone.

Now, I am a terrible Swedish-American because the only other Swedish fiction I’ve read is the Millennium Series, by Stieg Larsson (The Girl with the Dragon Tattoo, etc). (In my defense, there doesn’t seem to be a lot that gets translated into English? I need to get cracking on DuoLingo.) There’s some interesting commonalities, though.

Ahrnstedt describes herself as a feminist on her website (And I quote her here: “Feminist. (duh)”) and there’s quite a bit of discussion about feminism and the place of women in modern Sweden. Natalia is a world-class financial mind, but she is not allowed to participate in her own family’s interests. He father occasionally will hire a woman in executive positions, only to bully and harass them until they quit or he gets tired of playing with his food, and then goes “Well, see, woman are just too damn emotional to do things.”

(Never mind that he’s the one who loses his shit over…like everything? Like some other super-powerful corporate men I could name?)

There’s also bits about immigration and who’s a real Swede, which, given the current discussions and cultural climate about the refugee crisis and how do new immigrants fit into the culture and society in Europe in general, is interesting. It’s only touched upon.

Also, not unlike the Millennium Series, there’s after effects of rape and the ways a society will close ranks to protect its own. It’s an important factor in David’s motivation, and it was refreshing to see the actual victim calling him out for making her assault about him and his desire for revenge. Sure, it’s emotionally satisfying to systematically destroy the agents of abuse, but when the victim is unaware that’s what’s happening, and then is like “Dude, this isn’t ABOUT YOU, stay in your lane,” well, that’s a thing we don’t get a lot of.

I felt like this was full of Shakespearean drama, and scheming families, and hot sex, and gorgeous clothes, but also some important things to say about how the world is functioning. There’s a lot going on, though, and the ending a tad rushed (I feel like I’ve been saying that a lot lately).

I’m excited for the next book to come out in English, and also ALSO, I really really REALLY want Ahrnstedt’s historicals (which I just found out about) to be translated. They’re set in 1685 in Sweden, which is one of those eras that Americans don’t learn about much in Scandinavia – it’s like history jumps from the Viking Era to Ikea. I will personally MAKE a market for these BY MYSELF.

All In by Simona Ahrnstedt