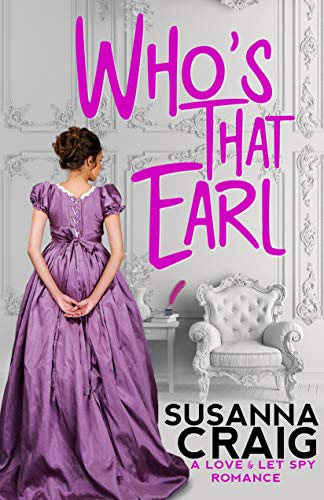 Who’s That Earl is a light, fun, Regency romance that felt like snuggling down under a warm blanket. It is gleefully tropey. Jane Quayle, cast out by her family, makes her living writing wickedly erotic novels under a pseudonym. As if one pseudonym wasn’t enough, she also pretends to be her own secretary under a second pseudonym. She does all of this in a neglected Scottish castle in the company of two neurotic dogs and an elderly and protective housekeeper. Thomas Sutherland is a spy, because of course he is, and also the unexpected heir to said castle and to the Earldom. Sent to Scotland to sort out his affairs, he hides his identity as the new laird, but can’t hide his entire identity from Jane since – surprise! – she turns out to be the woman he once fell in love with and nearly married.

(This may sound like a spoiler, but given that he was reminiscing over her amid the scent of jasmine on page one of the book, I think we all knew where this was going.)

And on it goes. The story is funny and sweet and cheerfully over-the-top. It knows that it is a little bit silly, and it doesn’t care, and nor should it. It’s just pure fun for the sake of fun.

One thing I liked very much is that while Jane and Thomas both hide aspects of their identity from each other initially, not only do they each know each other well enough to correctly guess what is going on, they also like and trust each other enough to reveal their secrets pretty early on, from which point it really is them against the world. On at least two occasions, they walk up to that moment where the Big Misunderstanding could arise, then decide to actually be sensible and talk about it. Yes, please.

It’s true that there is a little bit of completely uncalled-for foolishness in the latter part of the book – they really are both far too intelligent for some of the decisions they make, but we’ll put it down to stress – but the black moment does not last long, and indeed, is hardly dark enough to count as black, because it is so very clear how it must and will be resolved. It’s more of a grey moment, really.

In fact, Who’s That Earl manages the feat of being low-tension and low-conflict while still having plenty of story and heart to keep you reading. If you are looking for something to read that is charming and relaxing and fun and won’t stress you out too much, this is the book for you.

Miss Jane Quayle excels at invention. How else could the sheltered daughter of an English gentleman create lurid gothic novels so infamous someone wants their author silenced forever? Fortunately, Jane has taken steps to protect herself, first by assuming a pen name, and second, by taking up residence at remote Dunnock Castle, surrounded by rugged scenery that might have been ripped from the pages of one of her books. Her true identity remains a secret, until one dark and stormy night…

After years of spying for the British army, Thomas Sutherland doubts the Highlands will ever feel like home again. Nevertheless, thanks to a quirk of Scottish inheritance law, he’s now the Earl of Magnus, complete with a crumbling castle currently inhabited by a notorious novelist. When the writer turns out to be the woman Thomas once wooed, suspicions rise even as mutual sparks reignite. As danger closes in, can Jane and Thomas overcome their pasts to forge a future together?