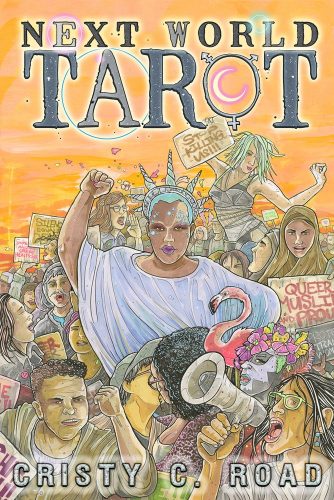 The Next World Tarot

I am so in love with The Next World Tarot. This deck is perfect for our current moment of national and planetary turmoil. In concept and execution, it is inspiring on a personal and political scale.

Featuring body outlaws, endangered cultures, and anti-colonial belief systems, THE NEXT WORLD TAROT envisions a world where justice relies on respect and revolutionary love. The Fool’s Journey is about smashing systemic oppression, owning their truths, being accountable to the people and places that support them, and taking back a connection to their body that may have been lost through trauma or societal brainwashing. The NEXT WORLD TAROT is a visual spectacle of both the battle cry and the reconnection between outcasts and their criminalized identities.

Most decks today are modeled after the Rider-Waite-Smith Deck, and this is no exception. The RWS deck (and the Next World Deck) has 78 cards which include the Major Arcana, the Court Cards, and the number cards, which are divided into suits. The Major Arcana cards represent major archetypes and big moments. This is where you find things like Death, The Lovers, and the Fool. The Court Cards usually have Kings, Queens, Knights, and Pages (one set per suit). The number cards are in four suits and in most decks each of these cards tells a little story.

The Next World tarot is modeled closely after the Rider-Waite-Smith deck with a few alterations. My favorite change is the replacing of The Hierophant (a male teacher or high priest) with The Messenger, a woman at a podium speaking truth to power and rallying the people.

This deck does not shy away from depicting pain and sorrow. But it does affirm and insist that pain can turn into positive action. It’s also a deck that emphasizes responsibility, challenging readers to educate themselves and hold true to high ideals.

The guidebook to the deck (which is included with both the full size and pocket size decks) speaks often of the importance of questioning ourselves, our actions, and our beliefs, and in honoring the daily struggle to put ideas into action in large and small ways. The people depicted in the deck seem to be expressing their socio-political belief systems in their personal appearance and their surroundings and actions, challenging the reader to step up.

Every one of these cards is a stunning work of art that deserves a frame. The large size of the deck lets the detail in the cards show, and the emotional, raw power of the art come through.

However, and it pains me to tell you this, this deck is a pain in the ass to shuffle. I’m not a great shuffler to start with and I have tiny hands, but I’m pretty sure even more skilled shufflers with larger digits will find this tricky. I alternate between shuffling the cards at the corners and just mixing them up by sliding them around on the tabletop (a technique called “washing the deck” or, for reasons unknown to me, “the corgi shuffle”).

There is a smaller, “pocket” sized version with the same art. It measures 2.5 x 1 x 3.5 inches. The full size deck is 4 x 2 x 6 inches, and despite the shuffling issues I prefer the large size because it lets the details sparkle and it just…it just sings. You put one card on the table and it lights up the room. It’s heady stuff. I could write an essay just about the card below, which packs so many positive, affirming, challenging concepts into a single picture:

I tried using this deck in a complicated reading and it worked. However, my experience with this deck is that it is great for single card reading. The cards are so powerful that just drawing one will give you plenty to think about all day. As we gear up for a difficult and pivotal election, this deck reminds me that the personal is political and vice versa, an important and ultimately uplifting message for a difficult year.