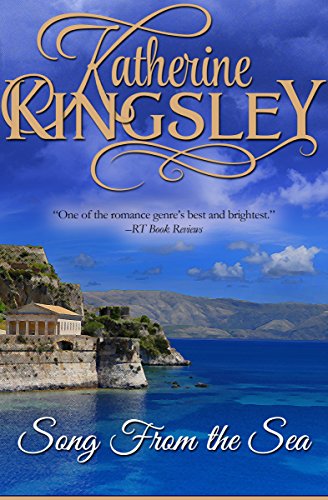 Song From the Sea

Song From the Sea is what vacation reading is all about. It almost, but not quite, reaches Windflower levels of wonderful absurdity. The heroine has AMNESIA! (that’s how I type ‘amnesia’ as a matter of principle) and sings with a “clear, high voice” and communicates with animals. Remember the animated Cinderella? That’s our girl. By page 36 she’s in the home of a brooding hero, being fed broth by a motherly housekeeper as she recuperates from falling off a boat. It’s glorious.

The story begins with Adam Carlyle, Marquess of Vale, in a rowboat. He has rowed out to sea with the thought of jumping overboard. His wife and son died over two years ago and he is still grieving. However, he’s distracted by the sight of a young woman on the deck of an approaching clipper ship. She is singing, while being circled by a gull. It’s very mystical. Then she falls overboard, hitting her head on the side of the ship on the way down, and Adam has to rescue her and take her home. Hence the AMNESIA! and the broth.

Callie (the woman with the AMNESIA!) is afraid that if she tells Adam that she has AMNESIA! he will send her to an asylum. Therefore, she pretends to be a woman who was travelling to England from Italy. Interestingly, when she has to pick a name for herself, she picks ‘Callie’ without realizing that this is her actual name. At first she stays with Adam while she recuperates from the head wound and an ensuing fever and then she stays because Adam doesn’t want to send her off into the world with no connections. Incidentally, Adam figures out about the AMNESIA! early on but just plays along.

Although the woman doesn’t know who she is, the reader does, thanks to a prologue in which we meet her and her father. Her name really is Callie, and she was raised in Greece by her father, who diedafter arranging for Callie to sail to England and marry Harold Carlyle. Harold is the son of an old friend of Callie’s father. Callie hadno intention of marrying someone she’s never met, but after her father diedCallie dutifully setoff for England so that she can break things off with Harold in person. She gotclose to England, she sanga song, she felloverboard, and here we are.

Naturally the mystery of the AMNESIA! distracts Adam from his sorrow and he takes an interest in Callie. The doctor says she has to avoid stress, so cranky Adam has to be polite and patient. Pretty soon they are spending a lot of time together, frequently without a chaperone (gasp!). Callie also hangs out with the cook, who teaches her how to make pastry, and Nellie (one of Adam’s tenants). She talks to the bees on the estate and calms them down. She feeds wild swans by hand despite the fact that they attack everyone else who approaches them. She prescribes various herbal ointments and tisanes to anyone who has an injury or a headache or, in the case of a toddler, is teething.

Adam finds all this so distracting that, although he still thinks about his lost wife and son, he actually takes an interest in things and starts eating and sleeping again and basically coming to healthy terms with his loss. His staff is thrilled and if it were up to them Adam and Callie would be hitched by page 36 (that is, the minute Callie regains consciousness). Eventually Callie meets Harold who is:

Spoiler: Eventually Callie hits her head again and gets her memory back. I’m not a doctor, but I’m pretty sure that’s not how amnesia, the medical condition, works, but it fixes AMNESIA! the literary trope every time. So she’s fine.

Given all the drama, the actual romance part is pretty straightforward. After a rocky start, Adam and Callie become comfortable with each other. They have hot sexual tension, but also they are very good at just hanging out. They are great at sex and great at witty banter and of course there’s a lot of adjacent drama what with the evil cousin, a nearby evil landowner, Adam’s dead family, and the AMNESIA!, but Adam and Callie are good at wandering around the grounds and being two people who enjoy each other’s company. This is an underrated quality in a romance. I love it.

The following involves a Trigger Warning for discussion of rape.

Click here for some questionable elements about Adam’s character

Sometimes a book is going along fine and then injects one weird page that completely changes the way I see at least one character, after which the contents of this page are never mentioned again. This happens on page 277, in which Adam reflects on how much his first wife (Caro) hated and feared sex no matter how gentle Adam tired to be. Here’s a thought Adam – maybe instead of being sympathetic but having sex anyway, you leave the poor woman the hell alone?

Granted, the idea that a Marquess should not have sex with his wife unless she is an eager participant is a modern one, and well-bred ladies were not expected to be enthusiastic about “doing their duty.”After all, it is Adam and Caro’s actual responsibility to have a son. Once Caro becomes pregnant Adam respects her refusal to have sex during the pregnancy. He also considers whether he will “have to live a life of celibacy” after the baby is born. So clearly he has regard for Caro’s dislike of sex. It’s also probable that Caro was genuinely committed to trying to have a sexual relationship, and that therefore she fully consented to sex even though she disliked it.

Still, without knowing anything from Caro’s point of view, it is at least possible that in modern terms Adam committed marital rape in the early stage of their marriage. This page needed to be either completely dropped or considerably expanded, because “Adam might be a rapist” should be a bomb that changes the entire book, not a casual aside. It’s an insensitive and poorly explained moment that is inconsistent with everything I read about Adam before and after that page.

With the exception of page 277, this romance is sweet and just the perfect amount of cheesy for a summer’s day in the mountains or on the beach. It’s ridiculous and delightful if you are the kind of person who can get behind a character who sings mystically into the waves before falling off a boat and obtaining a massive head injury with AMNESIA!. There is not a tinge of history in this “historical romance” but fine, whatever. The book convinced me that brooding Adam and singing Callie are Meant to Be, which is the job of a romance, and it entertained me, which is the job of a novel, so its work here is done.

Song From the Sea by Katherine Kingsley