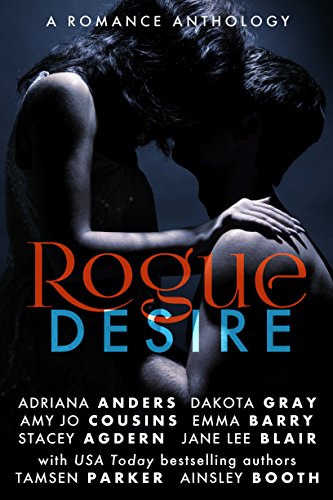 This collection is billed as an anthology for fans of The West Wing, for fired up resistance fighters, and for anyone who’s had a crush on that guy at the protest.

To be honest, I have not had any crushes on guys at protests, because the ones I tend to notice are the ones acting like fools, so there’s that. However, all of those other things describe me.

There are 8 stories in this book by Adriana Anders, Dakota Gray, Amy Jo Cousins, Emma Barry, Stacey Agdern, Jane Lee Blair, Ainsley Booth, and Tamsen Parker. They’re all contemporaries, written in response to the current political situation in the US, but they’re all very different.

One is a friends-to-lovers because hey fuck it, we might all die (because the president can’t not tweet).

One is a m/m protest hookup (but also let’s explore the different ways people come to protesting).

One is “the president’s daughter has the key to save the world.”  (It’s not Real Person Fic, I promise. It’s a presidential family clearly inspired by the current administration, but at least some of the children are responsible human beings.) (Also the hero of this one is Jewish!)

One is political opposites attract.

One is a woman running for city council, with the help of a hacker (kind of).

One involves the truth behind the Alt-National Park Service Twitter account, and what journalism means in this day and age.

One is light romantic suspense with a male escort/spy as the hero.

And my favorite is a second-chance romance that explores what place religion (specifically Black religion) has in the resistance.

I liked all of them, but I liked some more than others. One of the reasons I find novellas to be tricky is that there’s just not enough time to really develop a relationship.  The stories that worked the best were the friends to lovers and the second chance tropes. The other that worked well had a Happy For Now ending. Both people recognized that the potential for a relationship was there, but in the meantime, they’ll bang like screen doors in a hurricane while they figure it out.

The one story I was least comfortable with was the one that had a subject matter that I’m most familiar with: campaigning. “Grassroots” by Adriana Anders is about a woman running for city council. She has no infrastructure nor a campaign manager, and even with the help provided by the hacker hero, it was a bridge too far for me to believe. Also the novella ended with the hero and heroine declaring they had an HEA, but there just wasn’t time to develop that ending convincingly. I just know too much about the moving parts of a campaign to not be rolling my eyes.

The one I liked the best was “My Delight Is In Her” by Jane Lee Blair. The hero is a pastor in a DC presbyterian church. The heroine was his girlfriend in college, until he went to Divinity School, and she said she did not want to be First Lady of a church. She spent years being angry that he chose Jesus over her, and he spent those same years trying very hard to get over her. They come together during planning for an interfaith prayer meeting, and have to make a decision.

What I loved about this story was how it involved faith and religion, but it wasn’t a traditional inspirational. Both Leonard and Kim are kind of irritated with Jesus. They talk back. They also know how their faith informs their politics, and how that translates to action. I loved seeing religion in a liberal context – it’s not something that’s often seen.

Also Leonard and Kim are super cute. Blair says in her author’s note that this is her first published work but she’s got more coming, so keep an eye out for her. I’m hoping for some great things.

This anthology started out as a joke on Twitter, and…well, Twitter is still real life. And what starts off as a “hey, this would be funny!” can become a real thing. In this case, it’s a wide variety of stories with one commonality: that even when the world seems like it might crash down, love is still there, and there’s a happily ever after out there. We just have to fight for it.