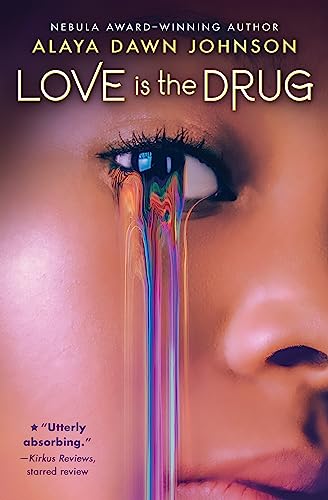 Love Is the Drug

Love is the Drug is a thrilling YA science fiction book with a great romance. The only reason I think it’s not, technically, a “Romance Novel” is that in a romance novel I care more about romance than anything else. In this book, I cared about the romance, but really I just wanted the main character, Emily Bird to be happy, because that girl is MADE OF WIN.

This book is set five minutes into the future. It’s just barely science fiction. Emily Bird is a Good Girl. She gets good grades at her prep school, and she has “good” (relaxed) hair, and she lives up to her mother’s high expectations, which include dating an ambitious boy named Paul despite having a huge attraction to Coffee. Coffee is the school drug dealer. He sells pot, Adderall, and some hallucinogens to other students, all of whom love his product but look down on him for his own lack of ambition. He’s also a chemistry genius.

Emily, Coffee, and Paul are at a party which involves students networking with influential adults upstairs and Coffee dealing downstairs. Emily finds herself in a car with Paul, clearly drugged despite having no memory of having taken anything. Next thing she knows she’s in a hospital with shadowy memories of being interrogated. She’s free to go – but under constant surveillance, and into a world which was stricken by a deadly flu pandemic while she was in the hospital. Emily’s mother (Carol) encourages her to stick with Paul and trust the military guy who’s shadowing her. Her friends want her to avoid scandal and keep fitting in. But with the world rapidly spiraling into a devastating crisis, Emily cuts her hair into a short Afro, makes some new friends, and adopts the name Bird. Emily may have been content with safety but Bird wants justice.

I loved this book for the conspiracy thriller angle that kept me turning the pages and because Bird was such an engaging character. It was very easy to relate to her need for approval and to her desire to play it safe and make everyone around her happy, versus her need for truth. I also loved it that as Bird matures she begins to accept the adults in her life as flawed human beings. Her uncle, who Carol hates and who Bird adores, really is adorable, but Carol has a point in that her uncle is kind of lazy. Her mom is often cruel and abusive but she’s also desperate to see her daughter achieve the kind of safety that can only come from being socially and economically powerful. It’s a coming of age story in the best way – not a whiny, angsty way but one that involves a character growing to become someone more powerful and more compassionate.

Another great thing about this book is the way it handles the flu angle. This book definitely has an aura of apocalypse about it, but it keeps things subtle and realistic. There’s no vast breakdown of society. People live their lives as normally as possible with the hope that all this disruption will be temporary. At the same time, people who are very scared are suddenly a lot more willing to trade freedom for safety, which manifests in political ways (the president takes on huge levels of power) and personal ways (the students are willing to stay at their school full-time because they are told they will be safe there). The flu virus has a long incubation period which is what makes it so difficult to contain – a nicely realistic touch, and one that adds to the menace since no one can tell who is or isn’t contagious at any given time.

Bird is in a triangle of sorts, but it’s not a love triangle. From the opening pages Bird intends to break up with Paul and when she does break up with him she doesn’t run straight into a romantic relationship with Coffee because she recognizes that her whole situation is crazy enough that romance has to take a back seat. However, Paul is a presence she can’t shake because of his link to the conspiracy. Meanwhile Coffee is a pretty awesome romantic hero who will do anything for Bird. Coffee tries to influence Bird just as much as her mother does. The difference is that Bird’s mother tries to mold Bird into the person that her mother wants her to be, while Coffee tries to encourage Bird to be the most authentic person she can be – the best version of her own true self.

In the best romance, there’s a combination of the lovers loving each other unconditionally and the lovers helping each other be the best possible versions of themselves. I never quite bought into the drug-dealing thing, though. While I loathed Carol, I did think that her not wanting her daughter to date a drug dealer had a sensible ring to it (although Carol was less concerned with how dating a drug dealer would feel for Bird and more with how it would look to everyone else).

This is a diverse cast in a lot of ways (race, class, gender, sexuality). Bird is Black and her parents have worked their way into the upper class socially speaking. Her uncle and his son are more blue collar. Coffee is Brazilian and looks Caucasian. Bird’s new best friend at school, Marella, is a lesbian. There are a lot of scenes that involve the ways race, class, gender, and sexuality affect daily interactions and life-long outcomes in terms of micro-aggressions and vast systemic life and death in-equities. The slight science fiction angle brings the dynamics that people live with today into sharp focus.

While the most dire angle is that, as Bird observes early on, the rich don’t seem to get sick, one of the most painful moments involves Bird and Marella trying to buy dresses and the shopkeeper assuming that Bird doesn’t have any money because of her new haircut. It’s a sharp reminder that when Carol tells Bird to dress and wear her hair in specific ways, she’s being a jerk to her daughter but not without some reason – she knows that Bird will be perceived one way with an afro and casual clothes and another way with relaxed hair and more business-like clothing. The difference between Carol and Bird is ultimately that Bird is willing to live with those consequences while Carol is not.

The romance in the book is solid and satisfying. At one point, Bird, her uncle, and her nephew become noticeably tense as they prepare a Thanksgiving dinner because they know Carol will judge the turkey and find it inadequate. Coffee picks up on this and offers to improvise a “Brazilian Style Turkey:” Carol can’t say he did it wrong if she doesn’t know what it’s supposed to taste like. It’s a clever and tactful (and rather tasty) solution, and very telling that Coffee so quickly realizes what the problem is and how to help Bird solve it.

Still, I cared much more about Bird than I cared about Coffee. The book is tightly focused on her attempts to develop some personal power and autonomy, and her attempts to solve a conspiracy, and the romance is more of a side plot than a main focus. This book isn’t being marketed as romance so that’s a feature of the book, not a bug. 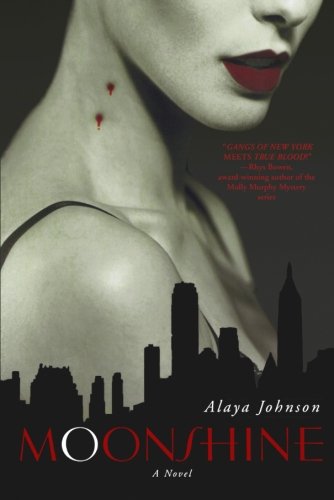 A
This book is advertised as a stand-alone. This means it has a satisfying conclusion but also means I can’t madly rush to the sequel, because there is no sequel. Seriously, I would totally read a book about Marella and Bird going to college and talking shit about their professors while doing each other’s nails. On the other hand, it turns out that this author has a previous book, Moonshine, which is a paranormal set in the 1920’s which REALLY IS IT MY BIRTHDAY? Seriously, my whole week just rearranged itself so fast that now it has whiplash. I have to go read all the things!

Love Is the Drug by Alaya Dawn Johnson