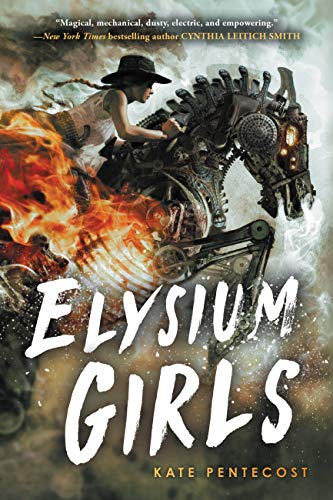 Elysium Girls begins in a small Oklahoma town in 1835. The tiny town of Elysium is trying to make it through the Dust Bowl years after the massive dust storms of Black Sunday (April 14, 1935) scour the land and leave survivors in what seems to be the only town left in the world. There’s no telephone, no radio, nothing but desert. People can wander in the desert up to a point, but beyond Elysium either people die or they find themselves back where they started no matter how hard they may try to travel in a straight line.

Dust Soldiers appear (massive, near-invulnerable supernatural beings with stone swords) and explain that the Goddesses of Life and Death are using Elysium to play a game. If in ten years, the people of Elysium have built a decent city with a certain percentage of stores set aside yearly as tribute, then they live, but will remain trapped in the town. If they fail, then everyone in Elysium dies. The book’s narrator and main protagonist, Sal, has to figure out how to save the town and break the game with the help of a handful of spells, some unexpected friends, a daemon named Asa, books from powerful witch Mother Morvena, and a collection of metal horses.

This book has a wonderful concept. In reality, the Dust Bowl was a Biblically apocalyptic event. Looking at the photos of that time period is like looking at another planet. Most of the things that Sal describes are factual. Black Sunday really happened, and although it did not result in most of the world disappearing, it probably felt like something that might be happening – the images alone are terrifying. People did use newspapers as wallpaper. People did die from dust sickness (a kind of pneumonia), there were rabbit drives (TW: animal abuse and death), and people did wear dust masks. It’s easy to picture a town surrounded by dust and struggling to survive against powerful forces while cut off from all help, because so many towns actually were in a similar position (minus the Dust Soldiers, the magic, and being trapped in a bubble in time for decades).

Unfortunately, once Sal goes to the desert, we leave the town. We leave the community in which we were just starting to become invested, and meet a whole new set of people. They are a wonderful, inclusive, courageous and clever group of young women, but there isn’t time for any of the characters to be properly developed, either in the town or in the desert.

I loved the focus on women of every age, as well as the inclusion of Black, Latinx, and Comanche women and a non-tragic f/f love story. However, I was disappointed that I never got to know any of the characters other than Sal and Asa beyond the bare minimum required for them to play a role in the story (and, in some cases, some background). I wanted to know these women beyond surface characteristics, and that didn’t happen. By the time the story was almost over, I didn’t care about the characters enough to get very worried or excited about what was happening to them. Once my interest in the setting and basic concept wore off, I got bored, and that’s a terrible thing for a reader to be.

I think this would have been a tighter, more compelling narrative if it had either contained the plot to the town limits (which would have massively changed the story) or had taken the time for more character development both in and out of town. It was wonderful to see such a creative fantasy story idea set in a very rarely explored time period. We’ve been seeing a lot of Weird West in fiction over the last few years, but the 1930’s Dust Bowl is a very specific place and time that isn’t often a setting for speculative fiction, and the book made great use of it. If the characters had been as well-developed as the place and time, I would have been much more involved in the story. As it is, even though this book didn’t hold my interest all the way through, I’m still looking forward to seeing what this author will come up with next.