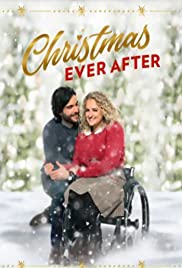 by Katrina Mathewson and Tanner Bean

I love made-for-tv Christmas rom-coms, and I’ve been soothing myself with them since Halloween. My expectations for these movies aren’t high, but every once and a while I come across one worth a rewatch. One of my faves this year is Christmas Ever After because of its catnippy premise—a romance novelist who falls for her cover model. It’s pretty much tailor-made for romance fans who like lighthearted holiday movies.

Izzi is a successful author whose writer’s block is keeping her from finishing the latest installment in her series. When her editor tells her that her hero is too perfect to be believable, she decides to decamp from the city to write in the familiar comfort of her favorite small-town lodge, where she’s an honorary member of the inn’s family. But her plans for a focused writing retreat are disrupted by the owner’s son, Matt, who loves wandering around the building attractively hammering and wrenching things. Matt looks exactly like the hero on Izzi’s cover art, and she’s alternately fascinated by him, and annoyed by his efforts to remodel a lodge that she thinks is already perfect. A widower who recently moved home with a small daughter, Matt’s the most eligible bachelor in town, but he only has eyes for his prickly, demanding new guest.

Izzi uses a wheelchair and I loved the way the disability rep was seamlessly woven into the storyline. She’s played by Broadway actress Ali Stroker as both driven by her work, and a giggly romantic. She also has a truly fabulous wardrobe. Izzi is a strong and independent person whose success as a writer is admired by Matt’s whole family. His dad proudly talks about her writing career, Izzi mentors Matt’s daughter (an aspiring writer herself) and every character in the movie describes her as a serious catch that Matt would be lucky to date. Which, she is! Izzi’s goofy excitement over seeing her book’s hero come to life was adorable to watch. Especially as it becomes clear that Matt’s not much like her hero at all. He’s clumsy, designs an ugly Christmas light show that lzzi describes as “Rudolph having a stroke,” and is terrible at bowling with his daughter until Izzi gives him a lesson. I love a big, funny family, and Matt’s was one of the best parts of the story.

This movie is a gooey low-stress treat that’s mostly free of romance novel shaming. There’s plenty of banter and light snark between the couple, but it’s over Matt’s vision for the inn, not Izzi’s career. The “mystery” of how Matt ended up on Izzi’s covers is solved halfway through, and Matt clearly loves being the inspiration for her books.

Show Spoiler
His late wife was a book cover artist, and he often modeled for her work

By the end of the movie Matt’s excitedly suggesting new directions for his fictional alter ego.

However, the tired idea that romance fans have unrealistic expectations of love reappears a few times, courtesy of Izzi’s editor. Not cool. Especially since I’m pretty sure the venn diagram of people who watch Lifetime movies, and people who read romances, is a circle. But I did appreciate that when an embarrassed Izzi tells Matt that her editor said, “The impossible standards in my love life have started to affect my professional life to the point where I’m writing about unrealistic love, instead of real love,” he shuts that shit down fast:

“Getting knocked down is hard…You have the ability to create a Happily Ever After, I can see how that feels almost perfect.”

The movie’s biggest flaw was the kissing scenes between the two leads. I watched this with my Mom, and we both SCREAMED with disappointment when their long-awaited first kiss was mostly a shot of the back of Izzi’s head. I was mad, y’all. I felt better when I read that this wasn’t a misguided plot to deprive me of watching them make out, but because Covid restrictions during filming meant the actors kissed through plexiglass. That looks extremely awkward. So thanks for licking plastic, Ali, so I could enjoy this movie.

I was willing to tolerate the small digs at Izzi’s supposedly unrealistic standards, in order to enjoy the charmingly Christmassy scenes of Matt and Izzi decorating cookies, flirting during Christmas festivals, and getting locked in her bedroom together.

So I appreciated that Christmas Ever After uses the holiday as a backdrop, not a major plot point. Izzi and Matt have fantastic chemistry and I was hopping up and down at getting to see a disabled character get the full romcom treatment.

I just finished my third rewatch of Christmas Ever After. The plot remains predictable, and I could have done without the awkward kisses and annoying book editor. But if you like stories about romance writers, fluffy Christmas romances, and the idea of your favorite cover model falling in love with you, this might be your new low-conflict fave.