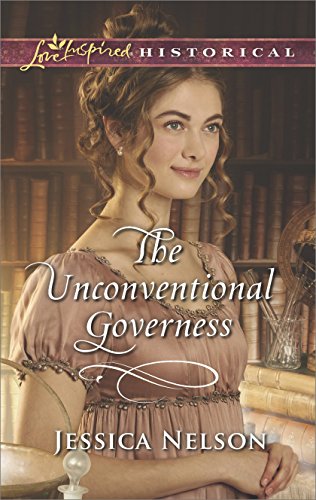 Archetype: Character with a Disability

The Unconventional Governess is a funny, touching Regency romance. Set in England in 1814, it involves a woman who wants to be a doctor and a man who finds himself with an estate to run, a niece to raise, and a case of epilepsy to manage. The book is short, the emotions feel true, and the characters are lovely.

Our heroine, Henrietta, is an orphan. Her uncle, a doctor, raised her and he took her with her to the battlefields of the War of 1812. She learned an enormous amount from him and is determined to practice as a doctor herself. At some point during the war she developed rheumatic fever and her uncle sent her back to England to live with an aunt. The aunt wants Henrietta to marry, but Henrietta is sure that if she saves enough money by, oh for instance, being a governess, then she can use the money to rejoin her uncle and resume doctoring.

Henrietta is not impressed when she meets the fashionable and impeccably named Lord Dominic St. Raven (!!!!!!!). His older brother and his brother’s wife died and left Dominic the estate. Dominic is also in charge of a very angry, confused, and intelligent twelve-year-old, Louise (the deceased couple’s daughter). Louise has a talent for chasing governesses away, so Dominic needs a governess. Additionally, Dominic has epilepsy, a condition he must conceal at all costs lest he be institutionalized. So he also needs a doctor. Henrietta agrees to step in on both counts, making it clear that this is just until she can rejoin her uncle.

One of things I like about this story is that Henrietta isn’t a “magical” governess. As she points out to Dominic, he tends to park Louisa with a governess and leave. Then Louisa has a fit, the governess leaves, and Dominic comes home to hire a new one. Henrietta is a creative governess who combines strict standards with flexible learning opportunities, but she credits a lot of Louise’s improved behavior to the fact that Louise adores Dominic and he’s actually there. It also helps that Henrietta was orphaned at about the same age as Louise and recognizes her behaviors as manifestations of grief and uncertainty about the future. Henrietta is unfazeable.

Anyway, Dominic and Henrietta encourage each other to be their best selves, which is my favorite thing in romance. They have fun conversations. Henrietta’s class role as an employee who is positioned in between servant and employer is addressed, as is her personal tendency to talk to Dominic as one social equal to another. Henrietta thinks that Dominic is frivolous and that he is neglecting his tenants (the latter is true). Dominic thinks that Henrietta should not blurt out every problem she has with him in front of the entire village (this is also true). There is medical competence porn and the distinct impression that both Dominic and Henrietta think that smart is sexy (they are correct). Also there are some fabulous clothes.

This is an “inspirational “ romance. As an atheist, I approach these with some trepidation, but I found that religion was an integral part of Henrietta’s life in a way that was realistic but not sanctimonious. It’s an important part of her personality but not the only one by far. Obviously there’s no explicit sex in the book, so if that’s something you are looking for you won’t find it here.

Dominic and Henrietta are strong-willed people who are raising a third strong-willed person and, eventually and inevitably, a dog. Henrietta’s character might best be summed up in her response to Dominic referring to one of her statements as “Strong words.”

Truly, she is my hero.

Fortunately both Dominic and Henrietta learn to be a little bit more humble and flexible – not so much as to be doormats, but just enough so that they can coexist.

The reason this book is a B+ instead of an A is that there’s a lot stuffed into this short book and it could have used just a little bit of expansion. Much of the plot involves Henrietta believing that she can’t marry and still practice medicine, while Dominic thinks that he can’t marry because of his epilepsy. He’s afraid he will die suddenly, or be incarcerated in an asylum, or pass the condition on to future children. Given how little was understood about epilepsy at the time, these are reasonable fears. These concerns are dealt with fairly realistically and in such a way that the couple can have a happy ending without love curing both epilepsy and sexism in one fell swoop. It is clear that Dominic and Henrietta will be need to be strong willed for the rest of their lives but by the end of the book they are an unbreakable team. They might even be able to handle the dog.

The Unconventional Governess by Jessica Nelson