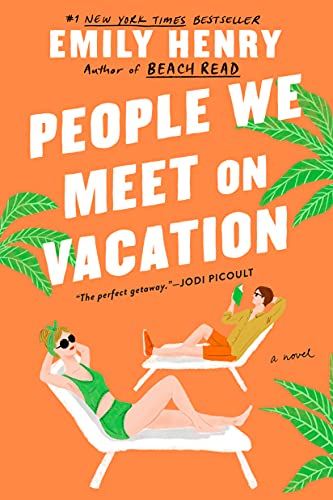 People We Meet on Vacation

Back when we used to take vacations (sigh, those wild pre-Covid days, how fun-filled they were…) they often began badly, what with trying to get packed in time and flying in coach and all the other bother of getting from one place to another. However, after a certain transitional period, the vacation would become enjoyable, perhaps even emotionally meaningful and moving.

This is the experience I had with People We Meet On Vacation, a book I ended up loving even though I almost didn’t make it past the first few chapters. With its friends-to-lovers/opposites attract tropes and slow build, this book has a When Harry Met Sally feel to it with a bit more angst.

The protagonist and narrator of the story, a young woman named Poppy, is ridiculously privileged yet still manages to feel sorry for herself. Poppy writes for an ‘aspirational’ travel magazine, which not only pays her a large salary but also sends her on multiple luxury all-expenses-paid vacations every year. She has an apartment in New York City and is basically living the dream. Poppy has enough self-awareness to recognize her privilege but is still sad.

Poppy realizes that the last time she felt truly happy was when she took a trip with her best friend, a guy named Alex. Poppy and Alex met in college and began a tradition of taking summer trips together long before Poppy got a job in the travel industry. Two years prop, they had a falling out and are now estranged.

Poppy reaches out to Alex, hoping to talk him into taking another trip with her – and to her surprise, he accepts. The rest of the book jumps backwards and forwards in time, as we learn how Poppy and Alex became friends, what split them apart, and what happens on this new trip. It’s clear that Alex is in love with Poppy and that Poppy is in love with Alex, but will those two crazy kids ever figure things out?

My biggest problem with this book is that initially I was not a big fan of Poppy. I found her to be self-centered, impulsive, spoiled, and slightly dishonest, and I considered DNF’ing the book because I didn’t care about her story. However, as the book progresses, it reveals more positive layers of her personality. Poppy matures a lot during the course of the book and I did eventually want things to work out for her.

Alex, meanwhile, is my everything. His dry humor and generally calm demeanor contrast perfectly with Poppy’s ostentatious and impulsive personality. Alex literally passes what I call the vomit test – this is when a romantic partner offers and performs a deeply unpleasant but vitally important task for the benefit of the other person in the romance. I came up with the Vomit Test after my husband cleaned up after our toddler’s exorcist level calamity on one epic night, and

Alex passes it when he forgoes a trip to Norway to take care of Poppy who has pneumonia and has, among other things, wet the bed.

People, flowers and poetry are great, but if you find a person who passes the Vomit Test, do not let that person slip away because they are true heroes of love.

This book has a lot of ‘worst-trip-ever’ humor and a ton of truly delightful friendly banter, which I very much enjoyed. It’s theme of travel makes it a lovely summer read and readers with the patience for a very slow burn will enjoy it, especially once Poppy’s character develops. I ended up being heavily invested in the book and the characters, and I loved travelling vicariously with these funny, sweet people and meeting their equally sweet friends and family.

However, despite what is supposed to be a HEA, at the end of the book I was still worried about Poppy and Alex. The fundamental differences between who they are and what they want have not changed. They work out what seems like a good compromise for the short term but I felt uneasy when I thought about their long term future given these deep differences.

Because of the structure of the book, the focus on Poppy’s character growth, and the happy for now ending, I think readers will enjoy this book most if they approach it as romantic comedy as opposed to Romance Novel. It will also appeal most to readers who have a lot of patience as Poppy and Alex’s relationship takes years to evolve from platonic friendship to romance, with a lot of pining in between. For those readers, the long trip is worthwhile and you’ll have a lot of fun on the way! The banter alone makes this book a fun read, not to mention the locations and the supporting characters. Pack a bookmark and have a good time.

People We Meet on Vacation by Emily Henry