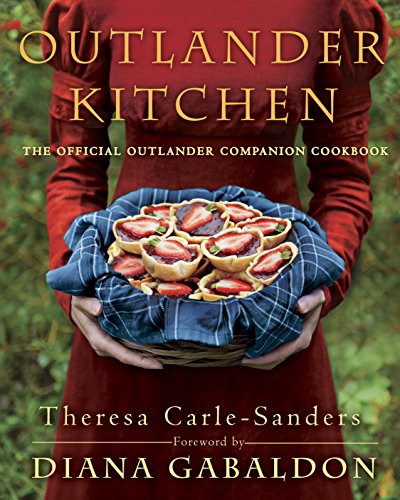 One thing you notice as you read the Outlander series is all the mentions of food. It’s not quite as prolific as all the food in A Song of Ice and Fire, but there’s a lot of book and a lot of food. As we’ve seen, a lot of people like food (I am one) and like playing with food, and Outlander fandom being what it is, we should not be surprised that there is now an Outlander cookbook!

For each recipe in this cookbook, we have excerpt of the book that mentions food (…mostly…) and then gives a recipe for a reasonable interpretation of that food. We have appetizers, breakfast foods, soups, main entrees, desserts, drinks, preserves, and, my favorite part, basics that you need for some of the more complicated recipes (broth, puff pastry, quick cheese, etc). One could do a whole meal from this book.

Carle-Sanders pulls from multiple time periods in the story, so we have 18th century foods (kind of), like cock-a-leekie soup or pheasant and greens, and 20th century options, like Spaghetti and Meatballs with the Randalls. Like the series, it’s a good and balanced mix. Some of the recipes are inspired by the characters, which is how we get BlackJack Randall’s Dark Chocolate Lavender Fudge or Stephen Bonnet’s Salted Chocolate Pretzel Ball (inspired by his testicle-ectomy) (I know).

I haven’t had a chance to cook anything from the book, but I find the methodology to be clear, and the instructions easy to follow. The recipes don’t require a lot of experience in cooking to instinctively know what you’re supposed to do next (it’s not like the technical challenge in The Great British Bake Off), though having your copy of The Joy of Cooking handy for any questions that you might have would be a good idea – though that is a good idea, like, all the time. Carle-Sanders is a trained chef, so she knows what she’s about when it comes to the mechanics.

You all know the reason I was interested in the book: I wanted to know about the historical aspect! To that end, I’m not impressed. Carle-Sanders says she used 18th century cookbooks as a starting point, but there’s no bibliography or indication of what recipe she adapted. For some of these recipes, I can make a reasonably educated guess, but I want sources! I ALWAYS WANT YOUR SOURCES.

I’m also annoyed that, for the historical recipes, she does not include the original recipe she adapted. You know my particular nerdery involves knowing the starting point, and I want to see part of the process, and I think other people would be interested in seeing Point A and a little bit about how Point A became Point D. She says in the introduction that she wanted this book to be useable and not just a curiosity on the shelf, and that she wanted it to be fun.

Okay. That makes the false dichotomy that “historical” and “fun” are on opposite ends of a spectrum, and it is not. It’s just not. Now, I get what the book is doing with the character recipes, and I get that that recipe development involved asking, “What food just says ‘Ian Murray’?” And that’s fine.

But! Playing with historical food is fun, and I, for one, would have been delighted to hear about Carle-Sanders’ adventures in making powsowdie, which involves scalding a sheep’s head. History is fun! Please don’t feed into the idea that seeing how food evolved and perhaps why people ate the things they did is boring and not fun.

That frustrated me a lot. It’s a conversation I’ve had on several different aspects of historical research and dammit, it’s fun for me, and for a lot of other people, and telling people who are just starting out that it’s not fun is a disservice. 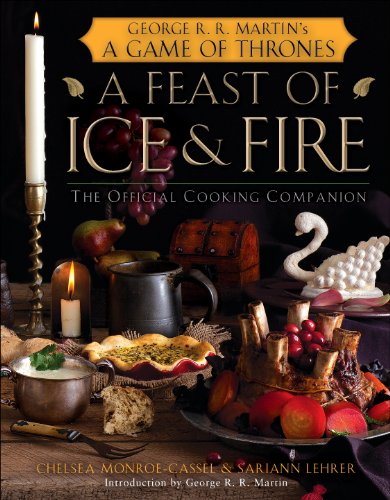 A | BN | K | AB
The ladies who did the Song of Ice and Fire cookbook, A Feast of Ice and Fire, did show their work by finding a historical recipe that kiiiiiind of did what they were looking for based on the original description in the book. They published that recipe and how they interpreted it, and also how they modified the historical recipe to make the food that appears in their cookbook. Both recipes are on their blog and the book, and THAT is amazing to me. With this cookbook, I don’t want people to go, “Oh, this book contains actual 18th century cooking,” because it does not.

Also I kind of want to know why the dress on the cover is Regency, instead of 18th century.

I think this cookbook does exactly what it set out to do, and I think a lot of people are going to enjoy this. It’s going on my cookbook shelf, but not near my historical books.