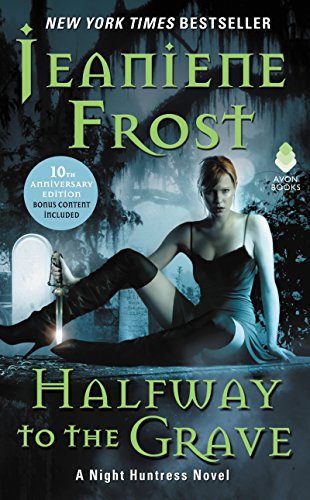 Halfway to the Grave

I usually know to whom to address my grievances, but in this case, I don’t know. Author Jeaniene Frost has written a kickass book with a heroine who fascinated me, a hero who was delicious, and a slowly escalating sense of terror and sexual tension that was very difficult to put down. This book passed the reading-on-the-bus test (wherein I look up from my book at Port Authority and go, “HUH?! We’re HERE? Nuh Uh!”) AND the take-the-book-out-of-my-bag test (wherein I ignore everything that is blinking and beeping at me from my laptop in favor of reading the book at home, which I rarely do). This novel was good.

My beef? It is book 1 of a series. And while I know better than to look the gift horse in the mouth and decide that it needs braces, I have to gripe about the ARCs I’ve read: if it’s book 1 of a series, how come it doesn’t bloody SAY that on the BOOK itself? I’m 30 pages from the end, and hello, a major conflict rears its head and I realize that it’s over but it’s not, and I totally whined in my own head: “Oh, no. It’s a seeeeerieeeeeees.”

I’m not ashamed: there was pouting. I was so involved with the characters and the building tension and the storyline that to learn I wasn’t going to get my happy ending in its entirety really, really burnt my toast.

So: note to whomever makes these decisions: please give me a little hint that this is the start of a series? I mean, I don’t even care if you completely humiliate me and say something like ‘Note to whining pain in my ass Sarah: this is a series numnuts.’ That’s fine. Just warn me, because nothing makes me grind my teeth like knowing that the story isn’t really over, but it’s over for me for now until book 2 makes an appearance.

However, you have to balance the good with the bad, so let me just say, while I’m addressing publishing folks – ya’ll. YA’LL. This is a hot rocking cover. Even Hubby picked it up and asked me about it. Sexy, mysterious, and very clever in its art – way to go. Seriously. Damn good.

Wanna hear about the book?

Cat Crawfield is a half human, half vampire 20-something, with a small town life and an upbringing regularly hosed down with shame from her grandparents and mother. Her mother was raped by a vampire, and Cat, born at 5 months gestation yet perfectly formed, was the result. She deliberately tries to hide her differences, but there’s no way to hide that she’s faster, stronger, and more resilient than the other humans in her life, to say nothing of her temper, which makes her eyes glow green.

Cat’s mother, who wields the Trowel of Guilt better than most, and I have a Jewish mother in law so I know whereof I speak, has preached long and loud to Cat that vampires are evil, horrible no good very bad things. Cat, with her superior skills and hunger for asskicking, has devised through trial-and-error and much independent research a tried and true method for dispatching vampires, and goes out nightly to hunt, lure, and kill vampires, trying to avenge her mother’s rape and her own misery.

This nocturnal badassery comes to a screeching halt when Cat is kidnapped by an exceptionally strong nosferatu named Bones, who is really, really old, really, really strong, and really, really, really sure that Cat is working for someone, someone who wants him dead. When Cat, sure her end is about two seconds away, tells him the truth about her life and mission, Bones refuses to believe her, until Cat’s emotions get the better of her and her eyes glow green. Bones, who is not a dumbass after many hundreds of years of existence, makes her an offer: train with him, and work with him as a vampire bounty hunter, or die.

Cat agrees, and the two of them team up to kill particularly evil vampires who have prices on their heads. They train, work, and, hellooo there, explore and attempt to resist the yummy sexual tension between them. Bones isn’t telling Cat everything about the vampires they’re stalking, and Cat, because she knows she’s being kept in the dark and because she’s been force-fed the “vampires are evil so kill ‘em all quick” routine from her mom, isn’t sure she can trust him. But man, she sure wants to find out more about Bones’ bone. (Sorry, couldn’t resist).

The action scenes are one after the other, leading to an incredibly spanking pace to this novel, with spicy revelations from Bones and Cat peppering the plot, and mixing my metaphors. I loved that Frost crafts an authentically British/Australian hero in Bones, with dialogue and colloquialisms that scan correctly – though, let’s see, blonde, pale, British old vampire… remind you of anyone? The larger story that parallels Bones and Cat and drives their mission together is also fascinating, and Frost doesn’t skimp on the worldbuilding, either. There’s also a fascinating examination of Who Art More Evil, the vampires or the humans, and the manner in which vampire society and social rules is described and revealed isn’t infodumpy, but instead arrives through the characters’ dialogue and actions. The revelations and explorations of the dichotomy between vampire society and human society is particularly intriguing because Cat herself stands on the border of both.

The only flaws, and I tempt spoilerage here so allow me to tread carefully, are in the backstory. There isn’t enough shown of Cat’s family to understand fully what motivates her, particularly in the end of the book where the plot takes a right hand turn and heads mightily towards the cliffhanger that yearns for book 2. As the reader, I had a hard time appreciating Cat’s anger and desire for revenge in the end of the book because those for whom she sought revenge weren’t all that much to begin with. I had a much more thought-provoking and involving read while Cat was struggling with her feelings about vampires, and her feelings for one vampire in particular, than I did at the end, which functioned mainly as setup for book 2. By the time the setup for book 2 arrived, I felt like I was reading a completely different character in Cat, and am not sure I bought all the changes in her personality that were evident by the final page.

And wherefore this book 2? Could there have been a happy ending to the story as-is, without the sudden arrival of The Plot Of the Next Book 30 pages from the end. To be fair, probably not. The issues that Cat struggles with, from her family to her personal strengths and weaknesses to her evolving understanding of her own place in her world are not easily solved in the novel-sized space, so I’m definitely curious as to how Frost will resolve those issues in the coming book. It would soothe my ornery self to know about how long the series will be, and if Frost has a definite end in mind, because I liked these two characters enough to want to witness their permanent and unquestionable happy ending.

Halfway to the Grave by Jeaniene Frost