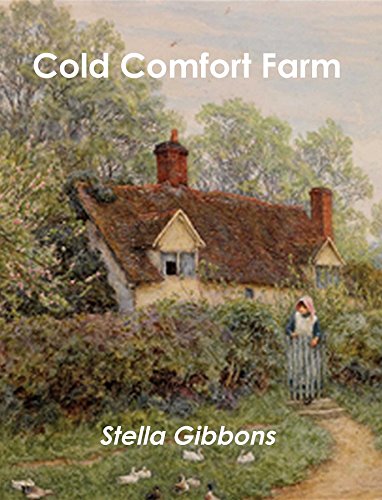 Oh, Cold Comfort Farm, where have you been all my life? This classic went completely past my radar and now that I’ve found it I’m actually surprised that it’s not dedicated to me, specifically.

Cold Comfort Farm, published in 1932, pokes gentle fun at the sub-genre of novels that dwells on misery and melodrama on English farms. Early versions of this genre include the works of Thomas Hardy and of course Wuthering Heights by Emily Brontë. In Cold Comfort Farm, our heroine, Flora, becomes an orphan and decides to sponge off of her relatives instead of getting a job. Flora likes things to be fun and cheerful, but also tidy. She’s a great fan of Jane Austen, and not at all a fan of getting a job:

When I am fifty-three or so I would like to write a novel as good as Persuasion, but with a modern setting, of course. For the next thirty years or so I shall be collecting material for it. If anyone asks me what I work at, I shall say, “Collecting material.” No one can object to that. Besides, so I shall be.

If you ask me, I think I have much in common with Miss Austen. She liked everything to be tidy and pleasant and comfortable around her, and so do I…I cannot endure messes.

Flora gets responses from several relatives, but none are quite satisfactory. She is intrigued, however from this letter from the Starkadderer family, which I’m copying here in it’s entirety because it’s a pure delight to anyone who’s read a word of anything gothic. I’d like to cross stitch the second-to-last sentence and hang it in a frame over my front door.

So you are after your rights at last. Well, I have expected to hear from Robert Poste’s child these past twenty years.

Child, my father once did your father a great wrong. If you will come to us I will do my best to atone, but you must never ask me what for. My lips are sealed.

We are not like other folk, maybe, but there have always been Starkadders at Cold Comfort, and we will do our best to welcome Robert Poste’s child.

Child, child, if you come to this doomed house, what is to save you? Perhaps you may be able to help us when our hour comes.

Flora senses an opportunity to gather material and heads off to Cold Comfort Farm. It’s filthy and it’s full of crazy people. Here’s its long and tortured architectural history:

The farmhouse was a long, low building, two-storied in parts. Other parts of it were three-storied. Edward the Sixth had originally owned it in the form of a shed in which he housed his swineherd, but he had grown tired of it, and had it rebuilt it in Sussex clay. Then he pulled it down. Elizabeth had rebuilt it, with a good many chimneys in one way and another. The Charleses had let it alone; but William and Mary had pulled it down again, and George the first had rebuilt it. George the Second, however, however, burned it down. George the Third added another wing. George the Fourth burned it down again.

This book is essentially one in which Jane Austen’s character Emma (but a version of Emma who is never wrong) visits Wuthering Heights. Few things are as delicious as the matter of fact way Flora reacts to the storm of insanity that surrounds her. The insane characters include Amos, who is constantly preaching about hellfire (“THERE’LL BE NO BUTTER IN HELL!”), and Seth, the representation of raw sexuality, who starts off with his shirt completely unbuttoned but who is always unbuttoning another button (where do all these buttons come from?).

Adam is in charge of the cows, who keep doing things like losing legs while he fails to notice as he stares dolefully into space, and Elphine roams the hills wearing diaphanous layers and composing poetry. Aunt Doom lives upstairs and threatens to have a fit if anyone leaves, and there’s a whole herd of associated farmworkers and relatives with names like ‘Urk’ and ‘Mark Dolor’. I won’t spoil things by telling you how Flora deals with all of this except to say that she does it with aplomb, and that the very first step she takes is to teach the hired girl, who winds up pregnant every spring, how to use birth control. Flora does this without even a hint of slut shaming. Flora is my hero.

The style combines a very modern candor with the convoluted, exaggerated gothic style. It’s also set “in the near future” although the only futuristic element of significance is that Flora’s cousin Charles has his own plane. As often occurs in older books, some derogatory terms are thrown around, but only by people we dislike. It seems that Flora finds racism and homophobia to be quite untidy, though she never spells this out.

Some of the paragraphs have stars by them and it took me the longest time and some help from the Internet to realize that the stars are the author’s attempt to grade her own mastery and level of purple prose, as in this three star bit: “From the stubborn, interwoven strata of his subconsciousness, but not as impalpable emanation, a crepuscular addition, from the unsleeping life in the restless trees and fields surrounding him.”

Flora adores Jane Austen, but she’s not an Austen heroine. She’s too full of fun – even Lizzie Bennet wouldn’t be able to keep up with Flora’s social life – and too frank. Flora might hint in order to manipulate, but she never speaks between the lines. Flora also admires Austen while somewhat missing Austen’s point – both Emma and Persuasion make a case that it’s usually not a good idea to meddle in the lives of others, while Flora is dead set on meddling to the immense benefit of everyone around her.

On the romance front, there’s a romance between Elphine and Dick Hawk-Monitor and a romance between Flora and Charles, but neither has much story development. Elphine’s romance is handily arranged by Flora in the space of a single dance, and Charles clearly adores Flora from the outset and is just waiting for her to say the word. While I adore Charles, the truth is there isn’t much of an active love story there.

Instead, the book is pure comedy – and what comedy it is. Every time I pick it up I find some new absurdity to giggle over, like Adam “clettering the dishes” or Mr. Myburg’s attempt to prove that Branwell Brontë was the true author not just of Wuthering Heights but of all the Brontë novels, or this description of Elphine:

Elphine jumped to her feet and stood poised; she had something of the brittle grace of a yearling foal. A dryad’s smile played on the curious sullen purity of her mouth, and her eyes were unawake and unfriendly. Flora thought, “What a dreadful way of doing’s one hair; surely it must be a mistake.”

I feel like this book is the very book I have been waiting for lo these many years. It is an absolute delight. Fans of Austen will like Flora’s utter imperviousness to melodrama and fans of the Brontë’s will love the send-ups of Brontë hand-wringing and commotion. Ultimately Flora sets all to rights and there’s this deep sense of satisfaction that everything is well in the world.

I had Good Book Sigh®, and then I read it again. This is going to be my new therapy book, because it makes me laugh and also convinces me that out of chaos can be brought order:

There they all were. Enjoying themselves. Having a nice time. And having it in an ordinary human manner. Not having it because they were raping somebody, or beating somebody, or having religious mania or being doomed to silence by a gloomy earthly pride, or loving the soil with the fierce desire of a lecher, or anything of that sort. No, they were just enjoying an ordinary human event, like any of the millions of ordinary people in the world.