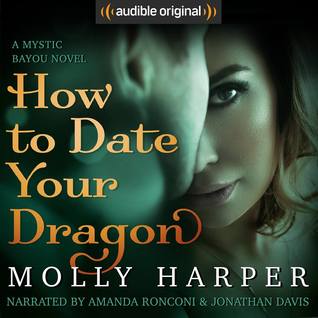 How to Date Your Dragon

How to Date Your Dragon by Molly Harper is an Audible original production. This means that it’s an audiobook written exclusively for Audible. The audiobook is performed by Amanda Ronconi and Jonathan Davis, and runs about six and a half hours at normal speed. I listen to most everything at 1.4-1.5x normal speed, so it took me less time.

The plot is part paranormal romance and part mystery. Jillian Ramsay is an anthropologist who works for the League of Interspecies Cooperation. She’s sent to a town called Mystic Bayou in Louisiana to study how the residents of that town, who are a mixture of magical creatures and humans, manage to live in relative harmony. The mayor, a bear shifter, welcomes her with eagerly, but the Mystic Bayou sheriff, Bael Boone, is not at all pleased to see her nor to have her digging into the town’s history and its secrets.

So you’ve got some paranormal romance meet cute, some small Southern town motifs, a mix of otherworldly creatures and shifters, a long history of magic and secrecy, a growing mystery, and an anthropologist who is very good at her job. Jillian very much wants to help other towns model the cooperation found in Mystic Bayou. As the cover copy says, there isn’t much time left for the mythological creatures to stay hidden with advances in technology: how long can Sasquatch stay hidden from Google maps? So there’s a mix of realism and fantasy that provides tension between the characters and their motivations as their priorities and their knowledge of one another shift and evolve.

Here’s the thing: Molly Harper dialogue and Molly Harper heroines work pretty well for me. They’re the right blend of sarcasm and emotional maturity, they’re thoughtful and realistic, and they’re often very, very funny. There were moments in this book where I laughed aloud in the car and would have to back up a few times to re-listen to a section I’d missed. I particularly like them in audio, and Amanda Ronconi narrates her heroines with just enough dryness in the delivery. They can be very fun.

So I was predisposed to like this book, and I did, but I also encountered some major flaws that undermined my enjoyment of the story.

First, the narration of Jonathan Davis is nowhere near as polished as Ronconi’s. Davis narrates chapters that are from Bael’s perspective, while the others are mostly from Jillian’s point of view. There is more of Jillian than Bael, which was a very good thing, because the audio for Bael was weird, and not in an interesting way.

I’ve got two small samples from the start of two chapters here. I think it sounds like there are two different men recording sections of this audio. What do you think? Do you hear it, too?  For me, the change in voice and cadence was very abrupt and distracting.

For me, the change in voice and cadence was very abrupt and distracting. But even with the uneven quality of Bael’s chapters, the two narrators themselves were not equally matched. When there are two narrators voicing the same side characters, the differences in delivery are very noticeable. In nearly every case, I preferred Ronconi’s performance of the characters who surround Bael and Jillian to Davis’.

I received the following email from Audible regarding the audio issues:

We’re reaching out to you today in reference to your recent purchase of the title How to Date Your Dragon by Molly Harper.

We wanted to let you know that in response to some feedback from your fellow listeners about the performance, we’ve made some edits and re-mastered the audio which we think will improve the overall experience. To access the new audio, simply delete any previous download of this book from your library and then re-download it to start listening to the new version.

If you have any further questions or concerns, please feel free to reach out to us anytime.

I’ll be downloading and listening to the remastered audio, and will update with details. /end.

There were also two elements to the plot that really bothered me. First, one of Bael’s cousins is a serial harasser and is sexually and physically inappropriate to Jillian on several occasions. Bael gets really angry about it, but in the end that cousin’s conduct is excused by his family, and ultimately by Bael. Otherworldly creatures don’t get a pass to sexually harass people and decline to accept “no” as an answer just because they’re otherworldly. “Supernatural boys will be supernatural boys” does not work for me. It’s gross and unacceptable when their conduct is excused, condoned, or overlooked by everyone else.

Second, well, this is a bit of a spoiler. Bael and Jillian…

…hook up after a lot of heated bickering and mutual denying of their attraction – as you do. But they have unprotected sex, and don’t really talk about protection at all. Jillian does ask later about how she, as a human, would get pregnant or if it were even possible, and I guess I’m glad to avoid the ever-frustrating “oh hey I’m clean how ’bout you?” conversation when he’s halfway up the valley of delights, but the omission seemed very surprising given Jillian’s extremely detailed knowledge about the mythological creatures who live in and around Mystic Bayou.

THEN, and this is the part that really, really irritated me, after they bang for awhile, Jillian notices she is glowing. Everywhere. She’s a human glow-stick. And Bael is all, “Oh, yeah, I forgot to mention that might happen.”

It seems banging him comes (hur) with the glow-stick side effect, but he didn’t warn her about it. That seems like a violation of consent to me, if not a really crappy thing to do one’s sexual partner. Moreover, said glow-stick-ness keeps her inside for 2+ days because she can’t do interviews lit up the way she is. It interferes with her job, and oops, he forgot to tell her? NOT COOL.

There’s also a murder mystery that appears in in the middle of the story, and that part was the weakest element of the plot. The more I thought about it, the more I wondered how, in a town full of individuals who have superhuman senses of smell and sight, a killer would be able to hide and conceal their actions.

That said, while I listened to this book I was pretty happy and entertained for the most part, uneven narration notwithstanding. I looked forward to getting back to it when it was time to walk the canines or drive somewhere. Jillian has some lovely friendships at the League, and has earned her position as a paranormal anthropologist with exceptional skills, knowledge, and diplomacy. She knows the rules and customs for interacting with different individuals, and worries that she might do something wrong or offend someone in Mystic Bayou. She’s thoughtful and thorough, and I enjoyed listening to her learn about the different communities in the town, and also discover that things weren’t what she was initially led to believe (of course they weren’t).

But after I finished it and thought about it for awhile, the consent issues and the murder mystery elements bothered me enough that I can’t enthusiastically recommend it. I can recommend the audio for several other Molly Harper titles, as they are very fun to listen to. As I mentioned, there are several books with great dialogue and some very funny heroines. This story had both of those things, too, but also had serious problems in the production of the audio and the execution of the story I couldn’t overlook.

How to Date Your Dragon by Molly Harper