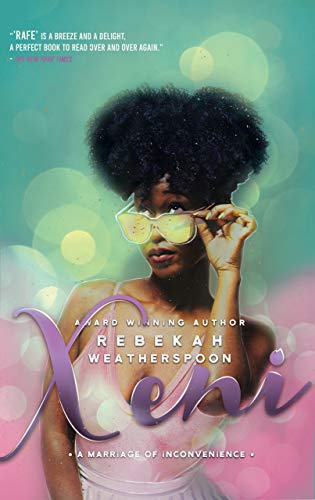 FROM NEW YORK TIMES ACCLAIMED AUTHOR REBEKAH WEATHERSPOON, COMES THE SECOND INSTALLMENT IN A NEW SERIES THAT BRINGS TRUE HAPPILY EVER AFTERS TO SOME OF YOUR FAVORITE SUPPORTING CHARACTERS.

She just wanted to claim her inheritance. What she got was a husband…

Xeni Everly-Wilkins has ten days to clean out her recently departed aunt’s massive colonial in Upstate New York. With the feud between her mom and her sisters still raging even in death, she knows this will be no easy task, but when the will is read Xeni quickly discovers the decades old drama between the former R&B singers is just the tip of the iceberg.

The secrets, lies, and a crap ton of cash spilled on her lawyer’s conference room table all come with terms and conditions. Xeni must marry before she can claim the estate that will set her up for life and her aunt has just the groom in mind. The ruggedly handsome and deliciously thicc Scotsman who showed up at her aunt’s memorial, bagpipes at the ready.

When his dear friend and mentor Sable Everly passed away, Mason McInroy knew she would leave a sizable hole in his heart. He never imagined she’d leave him more than enough money to settle the debt that’s keeping him from returning home to Scotland. He also never imagined that Sable would use her dying breaths to play match-maker, trapping Mason and her beautiful niece in a marriage scheme that comes with more complications than either of them need.

With no choice but to say I do, the unlikely pair try to make the best of a messy situation. They had no plans to actually fall in love.