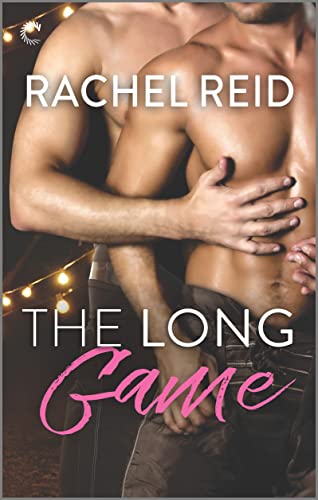 The Long Game is the sequel to Heated Rivalry, the rivals-to-lovers hockey romance that pairs Ilya, an infuriating Russian, with his hockey nemesis, sunny Shane. Heated Rivalry has a permanent home on my keeper shelf, but the book ends with a HFN. I was dying to revisit these two and see them have a more permanent HEA.

Unfortunately, I had three main issues with this book–Shane is a dick for most of it; the homophobia and bullying are overwhelming; and I hated the catalyst for Shane and Ilya finally coming out. The insufficient repercussions for awful behavior and the lack of support from allies shifted the tone of the book, so I found it distressing compared to the rest of the series.

The Long Game brings us a couple who are still living largely separate lives, traveling between their respective teams in Ottawa and Toronto to steal moments with one another. They’re closeted to everyone but Shane’s family and a couple of Shane’s friends, and the secrecy is wearing on Ilya, who’s struggling with depression. Playing for the crappiest team in the league, while his boyfriend’s the star player on a star team doesn’t help either. The two had originally planned on staying closeted until they retired, but Shane’s at the top of his career so it could be a decade until he retires. Will he ever be willing to weather the storm of public opinion?

Most of the books in this series have delicately balanced the bad behavior of one or two misogynists or homophobes, with plenty of caring hockey dudes and goey gay love. Is this realistic? Probably not, but I’m a romance fan not a hockey fan, so I do not care.

While Shane is winning games, Ilya is becoming increasingly isolated in Ottawa. He’s the team captain, but he avoids his teammates, and feels responsible for their failures. Shane hasn’t told his teammates about his relationship, but they know he’s gay. Poor Ilya can’t come out without people guessing that he’s dating Shane, the only single gay dude in his orbit. Ilya’s in a tenuous situation.

Yet, Shane spends much of the book blithely unaware of the imbalance in his relationship. His self-absorption is painful to read, and some of Shane’s behavior, like his disordered eating, is never resolved. Ilya himself only realizes his misery when his therapist–who is Russian and fabulous–points out that she’s the only person he can talk to about his life. He’s been too busy reassuring Shane to notice. Ilya’s arrogance and snark is part of what I love about him, and while the depression rep is excellent, it was hard to see him so unhappy.

My main issue with the book is the coming out storyline. Shane and Ilya are terrified of being outed, for good reason, but their behavior isn’t consistent with the level of terror they espouse. In Heated Rivalry, they are very careful, and that tension gives the book some of its heat. In The Long Game, they appear more stressed about keeping their secret, but they’re affectionate and make out in precarious positions, many of them outside. They aren’t hyper-aware of how their actions may be viewed by others.

It was stressful to read, and also felt totally devoid from any reality of how it feels to be closeted in a high-profile relationship. I didn’t care if the hockey was real in the book, but I needed it to feel believably queer. This dynamic did not, and it made me uneasy throughout the book.

Ultimately, Shane and Ilya are outed after someone takes a video of them kissing outside in an intimate moment, and it goes viral. The impact is brutal, violating, and honestly awful to read. They have only a few allies, and their defense of Shane and Ilya is lukewarm.

Partly, this is because the bullies are too powerful to topple. After a deluge of abuse and shaming, the HEA is quickly wrapped up, but it left a bad taste in my mouth. I couldn’t enjoy seeing them together because of everything they’d lost. I’d been looking forward to Shane and Ilya’s happy ending, but even though they’re still playing hockey, the final scenes weren’t strong enough to compensate emotionally for the angst and trauma that came before.

For many readers, any Ilya and Shane is better than none, and I appreciated getting to spend a little more time with them. Ultimately, it was too heart-wrenching for my taste, but hardcore Heated Rivalry fans who love intense angst might enjoy this. For me, The Long Game is the only book in the Game Changers series that won’t be a reread.

The Long Game by Rachel Reid