(Warning: Massive spoilers for this book lie under the fold, as well as a link to a LOLPORN photo. Read on at your own peril.) 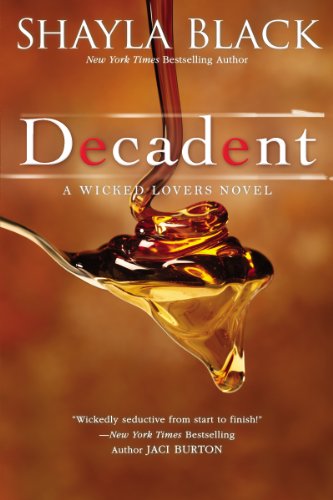 A
Reading Decadent deafened me.

Have you ever had that experience before? You finish reading a book and you feel just a bit numb. Your brain is ringing the way your ears do when leaving a venue with a terrible sound system, after watching a band that’s far too fond of playing very loudly and not nearly fond enough of playing with skill. I haven’t read too many novels that do that to me, so I attempted to analyze why Decadent inspired that reaction, and what I finally figured out was this:

The book was written in such a way that its ideal narrator was the Summer Blockbuster Guy.

“This summer… An innocent beauty learns the price of earning the love she thinks she wants… is finding love in a place she never expected.”

“This summer… A hardened soldier of fortune discovers that gaining the girl of his dreams… means letting go of the girl in his past.”

“HANG ON,” I can almost hear you saying. “You’re just making shit up, now. Candy, your slice-n-dice reviews have gone too far.”

Psh. You think I’d kid about something that important? You think I would make a crass joke about teh buttsecks to illustrate how incredibly silly this book is? Trust me. I’m not even remotely kidding about that last bit. In fact, there’s no way I can convey how silly this book is. It is so silly that I expected Graham Chapman to appear in Colonel regalia, declaring that this book was too silly to continue.

Alas, the latter would indicate that this book was funny. And it’s not. I initially read this book as a bit of high camp and was able to maintain this mindset (and therefore enjoy it to some degree) for about one third of the way, because the plot was too deliciously cock-eyed for me to take seriously: Kimber Edgington, the heroine, is in love with Jesse McCall, her childhood sweetheart (whom she hasn’t seen in almost a decade—whom she knew only for a summer when she was a kid, really). Jesse happens to be an international rock star with a taste for threesomes. Not the usual boy-girl-girl threesomes that are the stuff of fantasy for millions of males, of course. This dude’s into two guys and a girl. (Structuring this story any other way would’ve involved TEH GAY for the heroine.) So Kimber, in her quest to prove her everlasting love and commitment, decides she needs tutoring in the Ways of the Double Penetration, and seeks out Deke Trenton, a mercenary who used to work for her father and who apparently has a thing for threesomes.

(How does she know this? One of the more hilarious aspects of Deke’s fetish for this bit of vanilla kink is how everybody seems to know about it, from sheltered girls in their twenties to random people in bars to the Kimber’s brothers to Kimber’s dad. Seriously: every time somebody finds out that Kimber is having a relationship with Deke Trenton, there’s usually some sort of horrified gasp (or inarticulate rage on the part of the brothers), followed by “Do you know what he’s into?” It makes me wonder how in the hell they’d find out something like that. Does the dude have a Wikipedia page? If he did, I’d love to see his history/discussion pages.)

And when I say “he has a fetish for threesomes,” I mean it in the clinical sense. (The pedants in the audience will note that the fetish isn’t, strictly speaking, a fetish, because it refers to a sex act instead of an object or a body part. Look, just go along with me, all right? Pretend I said “paraphilia” and call it a day.) Seriously, Deke can’t work his dirk of manly passion unless he has additional male company. No, I’m serious. This dude hath not a workable stiffy unless another dude is there. Specifically, his cousin, celebrity chef Luc Traverson. This initially perked my interest—was Luc the Piers Gaveston to Deke’s Edward II, except kind of incestuous, which would make it somewhat more kinky? Alas, no. The true reasons why these two paragons of masculinity engage almost exclusively in threesomes are both much more hilarious and much more repulsive than using a woman as a conduit to express homosexual urges. But more on that later.

So I trucked along for a while, wallowing cheerfully in the terrible plot, but after a while, the sheer weight of the terrible prose crushed my sense of humor. The only comfort left to me was reading the more ludicrous parts out loud to friends.

But wait, there’s more! Deke, besides being incapable of fucking a woman unless Luc is there (NOT GAY NO NOT AT ALL), has a really, really strange complex about virgins. Namely, he’s convinced that fucking a virgin in the va-jay-jay means she’ll die. This is made into a Really Big Deal, and is also part and parcel of his sexual dysfunction in general and with Kimber in particular (NO REALLY NOT AT ALL GAY). This results in the best conversational exchange in any erotic romance novel, ever, when Kimber finally offers to allow Deke entrance into her cinnabar cavern of feminine wonder (because what she feels for Deke is even more speshul than what she feels for Jesse), and Deke, after pondering and sweating and struggling over this decision heroically, takes decisive action:

He tilted her up again, her legs now resting on his shoulders, and positioned himself and began to push.

Into her back entrance.

“What the hell are you doing?” Luc barked.

Tensing a little more with every inch he pushed inside Kimber’s tight passage, the tendons on his neck standing out, the muscles in his arms shaking, assailed by the amazing sensations of being slowly enveloped by her tight, ready flesh, Deke could barely form a word. “Fucking her ass. Saving her life.”

But wait, there’s more! When I read this part aloud to my friend Ben (who was the first victim of many), his immediate response, after he’d picked himself up from the floor, was “I’m in ur ass, saving ur life.”

And being the enterprising nerd that he is, he actually hunted down a picture and captioned it, LOLCat-style.
(Warning: the picture is pornographic. It seriously is. Don’t click on it, for the love of God, if you’re anywhere in the office, or if there are little kids or animals or sweet, sheltered little old grandparents within a direct line of sight of your monitor.)

So behold! The first instance of LOLPorn found on Smart Bitches.

Recovered from that yet?

And then a wacky suspense plot springs up out of nowhere and ambushes the rest of the storyline, putting Kimber in danger (remember, kids: it’s never acceptable to have the heroine save the hero’s ass, because that might mean he’s a pansy who can’t get it up unless another man’s also…oh, wait). All of this is a convenient way of getting Deke back together with Kimber so he can open up about his Deep, Dark, Loathsome, Virgin-Killing past—the explanation for why he never fucks virgins, and why he always has to have a wingman in bed. Are you ready for the secret?

Back when Deke was a teenager, he de-virginized his beautiful but highly unstable girlfriend, who became pregnant, got crazy, and killed herself.

That’s it. That’s the big, dark, tormented secret of Deke’s past. Which is actually a pretty good tormented secret, except that his reactions are both nonsensical and morally repulsive. When you attempt to unpack the implications, you come up with the following:

1. His avoidance of sleeping with virgins only makes sense if you accept that virgins are much more likely to become pregnant than other women. Because it’s not as if there’s such a thing as fertile non-virgins, or, you know, BIRTH CONTROL THAT WORKS RELIABLY.

2. Deke needs another man in bed so that if the woman becomes pregnant, he’d have another man to blame. Because in Deke’s universe, paternity tests, like birth control, do not exist.

In case you’re thinking that I’m inferring point number 2, let me assure you that I’m not. I am, in fact, quoting “another man to blame” verbatim from the book.

I could go on, but I think you get the point: this book is a trainwreck of unintentional hilarity. If ever there was a book ripe for MST3K treatment or a drinking game (take a shot every time a character starts a musing with “Damn”), this would be it. The sex scenes are pretty hot, I’ll give it that, but even those are subject to gems like “Fucking her ass. Saving her life.”

If you’re really into copious quantities of sweaty, distressingly hetero buttsex and a menage that wimps out in the end, you might enjoy this book. Me? I’m still recovering from the LOLPorn.