The Legend of Lyon Redmond 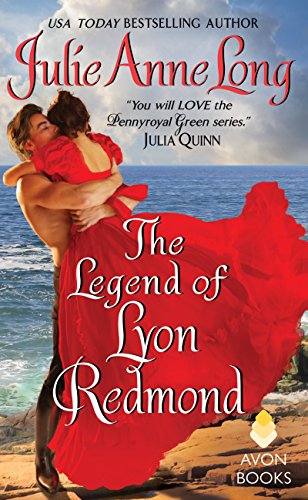 Bound by centuries of bad blood, England’s two most powerful families maintain a veneer of civility . . . until the heir to the staggering Redmond fortune disappears, reviving rumors of an ancient curse: a Redmond and an Eversea are destined to fall disastrously in love once per generation.

Rumor has it she broke Lyon Redmond’s heart. But while many a man has since wooed the dazzling Olivia Eversea, none has ever won her—which is why jaws drop when she suddenly accepts a viscount’s proposal. Now London waits with bated breath for the wedding of a decade . . . and wagers on the return of an heir.

It was instant and irresistible, forbidden . . . and unforgettable. And Lyon—now a driven, dangerous, infinitely devastating man—decides it’s time for a reckoning. As the day of her wedding races toward them, Lyon and Olivia will decide whether their love is a curse destined to tear their families apart . . . or the stuff of which legends are made.

The Legend of Lyon Redmond by Julie Ann Long