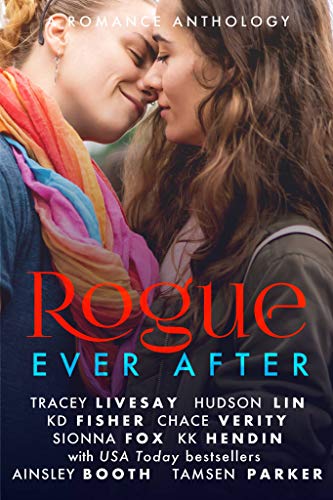 Love never dies. Hope never ends. The Rogue series wraps up with eight new romances for dreamers who know “happily ever after” is a chance for a new start.

For Love and Country by Tracey Livesay

Zora grows disillusioned as her boss, Senator Ethan Humphries, bows to pressure to back the Republican president’s agenda. Frustrated, she hands in her notice.

Ethan is stunned by Zora’s resignation…and the realization of his feelings for his deputy chief of staff. Will he do the right thing or risk losing Zora’s respect, and her love?

When PhD student Brandon’s celeb crush shows up on campus, he can’t believe it. The pundit is out of Brandon’s league, but there’s a spark that makes him hope.

Brandon’s adorable nerdery is Jonny’s kryptonite. Yet tempting as he is, Toronto is a no when Jonny has a job in Vancouver.

When a storm strands Jonny, he crashes at Brandon’s where they fend off the cold with heated debates and hotter kisses. But one night isn’t enough to convince Jonny to move to Toronto—is it?

A Little Rebellion by KD Fisher

Veteran teacher Ruth wasn’t ready for a woman at the dog park to divert her. She can’t afford to pursue love when her students need her.

It’s Mia’s first year teaching and she has to get it right: stand up to her intolerant principal, not get distracted by a crush.

As their relationship grows, they must fight to save their school and decide if their friendship can turn into something more.

The Blundering Billionaire by Chace Verity

Billionaire Jayden-James Hancock has spent his whole life in his fashionista mother’s shadow, but an opportunity for change arrives with his new assistant. Tired of debt struggles, Isla Dyer rallies hard for student loan reform. Inspired, Jayden-James joins the movement. While changing his clothes has always been easy, changing the world—and falling in love—might be a different catwalk.

Evan doesn’t miss politics. Bartending a stone’s throw from the state house is as close as he’ll get now, until Tessa sits tearing apart a bill, full of passion. Tessa might be three steps ahead of the former wonk, but sparks fly over offers to put her in touch with old contacts. Tessa’s burning need to fix the world could bring Evan too close to the old fires, but he can’t resist the temptation.

One café manager swamped with guilt over not being politically engaged enough.

One overwhelmed Congressional aide who thinks he’s failed DC when DC failed him.

Two friends scared to admit how in love with each other they are.

Can existential crises, too many feelings, and far too much caffeine help Jasper and Raina admit their feelings, or will it end in heartbreak?

Love Your Love by Ainsley Booth

Two workaholics meet and fall in love. That’s just the start of the story for biz school prof Tanya and political staffer Penny. A games night with neighbor Win, a wild child artist, sparks something new for Penny. And to her surprise, her beloved partner is all for Penny exploring a new relationship alongside theirs.

At the year’s hottest awards, Hadley should be on the red carpet with a Hollywood hunk. Instead she’ll be escorting queer AF Archer.

Rogue Ever After by Tamsen Parker