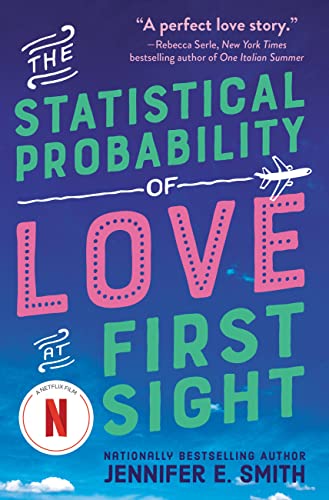 The Statistical Probability of Love at First Sight

I picked up The Statistical Probability of Love at First Sight because with a title like that I figured it must be geek-friendly. It turns out that it’s not very geeky, but it’s a cute YA that is entertaining and sweet.

Statistical is told from the point of view of the heroine, Hadley, who meets Oliver in an airport.  Hadley is seventeen and her parents divorced fairly recently (about a year or before the book starts, if I remember correctly).  Hadley and her mom live in the US and Hadley’s Dad lives in the UK, where he’s about to get remarried.  Hadley misses her flight, meets Oliver, and winds up sitting by him on the plane to London.  If she’s very lucky, she might still make it to the wedding – but first she must overcome travel obstacles and a case of claustrophobia that makes flying torture.  Also, at some point, she’s going to have to wear an awful dress, and she’s going to have to interact with the stepmother she’s determined to hate even though the stepmother seems to be falling all over herself to try to connect with Hadley and help her feel included and valued.  The stepmother reminded me of an older version of Giselle, from Enchanted, so…good luck hating her, Hadley.

As Hadley and Oliver meet cute repeatedly, and as Hadley keeps trying to get to the wedding which she doesn’t even want to attend, I was reminded of Sixteen Candles, the movie directed by John Hughes (only without the racism and rape stuff – how did we survive the ‘80s?).  There’s a similar sense of emotional ambivalence, with a girl who is fundamentally kind and sweet but also a little immature and self-centered.  OK – Hadley is very self-centered.  I thought Hadley’s rather bratty attitude towards her dad’s remarriage and her self-centered conversations with Oliver made sense given her age, the situation, and the fact that Oliver deliberately avoids talking about himself.  But that didn’t always make Hadley fun to hang out with – sometimes I just wanted her to get over herself.  The other obvious similarity is the fascination with an elusive boy, and the fear of the change that a wedding will bring to the family dynamic.

This is story is all about Hadley, and how she restores her relationship with her father.  Oliver is like a catalyst towards that end.  We never know very much about him although he’s funny and charming and wounded.  You know how, in an action movie, the girl prompts the hero’s story by being kidnapped, and then we know the hero has taken the proper actions because he gets the girl?  This is Oliver’s function in rom-com terms – he gives Hadley a push but his own story basically exists to give Hadley some much-needed perspective and motivation.

One thing this book does well is refuse to overshoot.  Despite the title, Hadley and Oliver never claim to be in love.  This is a book about the beginning of new possibilities, not reaching a grand conclusion.  I tend to think that in YA it makes sense not to claim that the lead couple will definitely be together forever, and I certainly think it makes sense given the fact that Hadley and Oliver know each other for such a short time.

I also liked the sense of place and the crazed, romantic comedy sense of constantly trying to get someplace with a tight time limit and a lot of obstacles.  The airport is…airporty.  The airplane is claustrophobic.  England is unfamiliar and confusing.  It was weirdly entertaining to watch Hadley do things like try to find Oliver with no information but that he might possibly be somewhere near a church in Piccadilly.  Hadley is stubborn, and it’s fun to see how that quality both messes her up and works in her favor.

This book was not the best book I’ve every read, but I had a lot of fun with it.  It was like those snack size bags of potato chips – yummy, quick, not super-deep, but fun.  I especially enjoyed Hadley’s relationship with her parents.  The stuff about her dad was truly emotionally powerful.  The romance with Oliver was less powerful, but I believe that was intentional.  It’s not the focus of the book.  But if there’s a sequel in which Hadley and Oliver go on a series of dates at English bookstores, I’m so there.

The Statistical Probability of Love at First Sight by Jennifer E. Smith